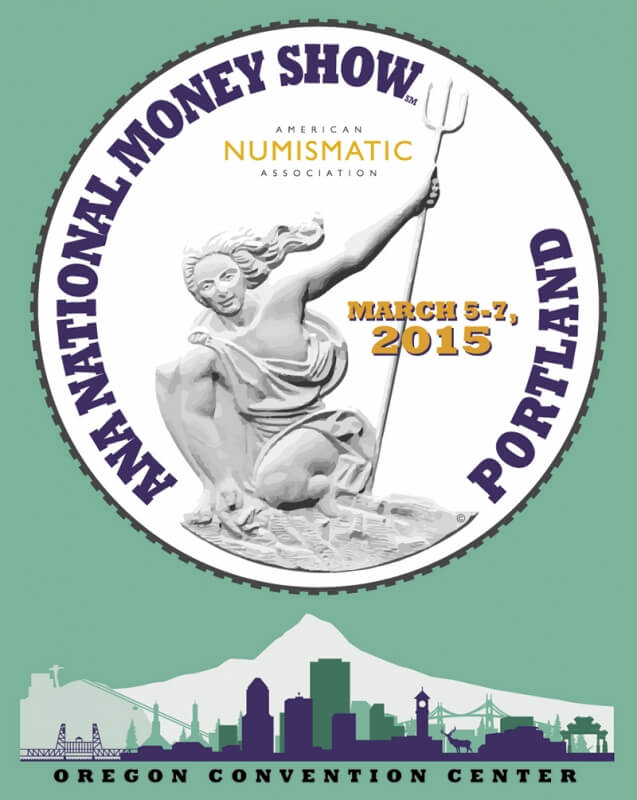 The American Numismatic Association’s 2015 National Money ShowSM welcomed a total of 4,592 people for the three-day event, held March 5-7 at the Oregon Convention Center in Portland, Oregon.
Attendance was strongest on Saturday, March 7, when 1,420 members of the public turned out for free admission and free, educational appraisals on up to three coins or other numismatic items.
"Overall attendance during the Portland National Money Show was a little slow to start, but we had a great turnout by the end,” said ANA President Walter Ostromecki. “Our Saturday attendance was particularly strong, with the public taking advantage of free admission and free appraisals on numismatic items. We also received some great media coverage from the local television affiliates, and the event was featured on National Public Radio’s ‘Here and Now’ program, which airs all across the nation.”
Stack’s Bowers Galleries proudly presented the Official Auction for the Portland National Money Show, including selections from the Highland Collection. This compact sale brought big results, grossing a total of $3,134,799.
The highest price realized in the sale was for a Gem Proof 1839-O Capped Bust half dollar that brought $193,875 in spirited bidding. Another half dollar, an 1807 Draped Bust in MS-65 (NGC) from the Highland Collection, realized the third-highest price in the sale, garnering $129,250. An 1869 Proof-67* Ultra Cameo (NGC) Liberty eagle brought the second-highest price, at $150,625.
“Stack’s Bowers has continued its long relationship with the ANA, and although small by lot count, there was a lot of interest in the types of coins offered in our mid-winter ANA sale,” said the firm’s president, Brian Kendrella. “The results speak for themselves, and we are quite pleased. This sale shows that fresh-to-the-market and rare coins bring strong prices.”
Full attendance figures for the National Money Show:
Total member attendance: 1,513
Pre-registered members: 58
March 5: 767
March 6: 373
March 7: 315
Total public attendance: 2,277
March 5: 427
March 6: 430
March 7: 1,420
Total attendance: 4,592
March 5: 1,848 (returning visitors, such as table personnel, staff and national volunteers, are counted in first-day attendance only)
March 6: 803
March 7: 1,859 (total includes Scouting attendance of 124 Boy and Girl Scouts, plus parents and guardians)
Past National Money Show attendance:
Atlanta, 2014: 4,771
New Orleans, 2013: 3,204
Dallas, 2012: 2,973
Denver, 2012: 2,800
Pittsburgh, 2011: 4,027
Sacramento, 2011: 4,668
Fort Worth, 2010: 5,480
The American Numismatic Association is a congressionally chartered nonprofit educational organization dedicated to encouraging people to study and collect money and related items. The ANA helps its 25,500 members and the public discover and explore the world of money through its vast array of education and outreach programs, as well as its museum, library, publications, conventions and seminars. For more information, call 719-632-2646 or go to www.money.org.
Tags
Categories
Archive
Share this on:

Great attendance! Wish I could have gone!