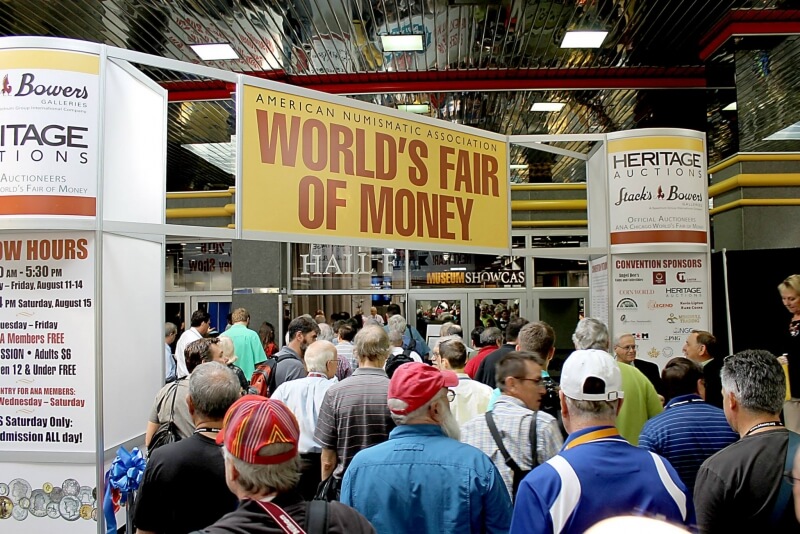 24 Aug 2015
The American Numismatic Association ANA - www.money.org World's Fair of Money (WFM) 124th Convention was held at the Donald E. Stephens Convention Center, in Chicago, IL on August 11th – 15th, 2015.   Congratulations to the Chicago Coin Club for hosting their 16th ANA Coin Convention www.chicagocoinclub.org, along with Host Chair Jeffrey Rosinia, Honorary Host Chair Harlan Berk and the CCC committee for doing outstanding and dedicated work for this important WFM.  Thanks also to the ANA National Volunteers for their continual assistance at all the ANA conventions.  Convention Director Rhonda Scurek and her team worked hard and kept this large show running smoothly.  ANA Executive Director Kim Kiick also is to be commended for all the great work done by the ANA Staff.  President Walter Ostromecki and the Board also contributed to the success of this convention.  A big thanks to all the dealers for taking tables, the early birds for purchasing badges, along with the show sponsors & patrons for their generous donations in support of the convention.
This was the largest bourse the ANA has ever had at any convention.  The show was so large that the ANA placed the exhibits into another separate hall.  It had an entrance from the front and in the main bourse through an overhead door.  You know a convention is large when the “Show Guide” is 120 pages long.  Nine Government agencies, including the U. S. Department of the Treasury and their “Million Dollar exhibit,” were also there.  Dozens of coin clubs and societies also participated with tables and educational meetings.  The convention had two successful auctions by Stacks-Bowers and Heritage.  A sincere thanks and gratitude to all numismatists and institutions who shared their knowledge and/or collections in the ANA Museum Showcase (we especially liked the “Coins of the Bible” display), Collector Exhibits, the exhibit judges, Money Talks, Coin Television, Sundman Lecture Series, Numismatic Theater presenters, the Numismatic Press - Numismatic News,  Coin World and other publications and media..  Thanks to Jamie Franki who designed the official convention medal.  The Scouts had an excellent clinic and many of them came to the bourse, along with other YNs and enjoyed the Kids Zone and treasure hunt.  PPI once again kept the show very safe, and we didn’t hear of any problems.
Two major auction companies held separate sales during the convention, Heritage Auction Company www.ha.com  and Stacks-Bowers – www.stacksbowers.com.  Both sales did very well and if you need the prices realized go to the above sites.  ANA members were allowed early entry on the second day of the show.  It would be nice if they let the LMs in even earlier.  The extra half hour is a great perk for being a member of the ANA.  We don’t have a count, but attendance appeared to be pretty steady from the opening day to close.  The Friday ANA banquet had Joe Boling as MC, and he kept it going nicely.  The dinner was superb and the second donor – Silent Auction at the banquet was partially successful.  The Bob Lecce Advanced Scholarship fund benefits from this auction.  We want to congratulate Donn Pearlman on receiving the ANA Farran Zerbe Memorial Award, and David E. Schenkman, along with James E. Charlton (1911 – 2013) for being inducted into the ANA Hall of Fame.  Congratulations to all the other award recipients including Larry Sekulich for winning the Steven J. D’Ippolito Best of Show Award.  Several other special dinners, receptions or events were held at the convention including the PNG banquet, the NLG Bash and others.
Thanks again to everyone for their work, donations, effort and contributions to help make this an outstanding convention.  The ANA will return to Chicago in 2019.  This city is one is one of our favorite coin show sites with its free airport shuttle along with many nearby hotels.  We hope to see you at the next two ANA Conventions which will be held in Dallas, TX on March 3 – 5, 2016 at the Dallas Convention Center and in Anaheim, CA on August 9 – 13, 2016 at the Anaheim Convention Center.  Yours in Numismatics, John and Nancy Wilson, ANA National Volunteers
Credit to Life Members Nancy (3995) and John Wilson (3467)
Tags
Categories
Archive
Share this on:

Wow! Look at that crowd! Thanks for a great blog!

It sounds like it was a World of fun. Thanks for sharing!