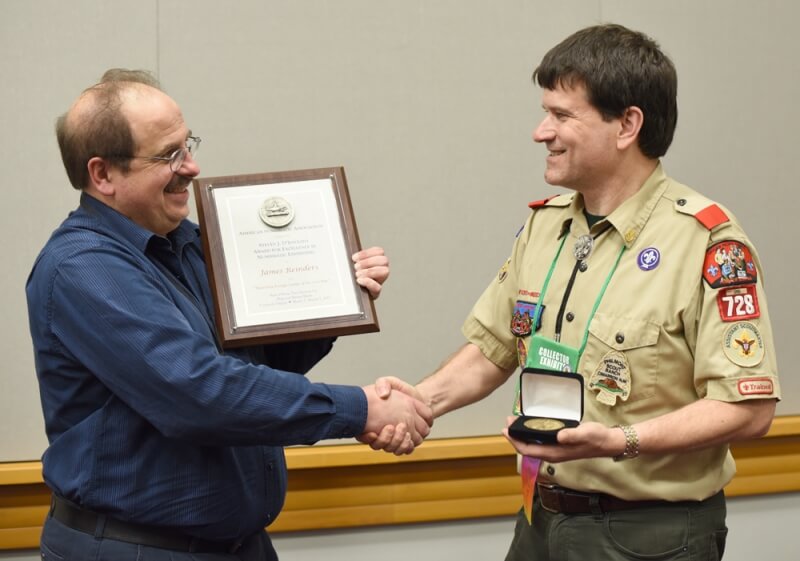 James Reinders, a Life Member of the American Numismatic Association, received the Steven J. D’Ippolito Best-in-Show Exhibit award for “Complete German States 3 Mark Commemorative Type Set (1908-1918)” as well as second place Best-in-Show for “Encased 3¢ Postage Stamps of the Civil War” at the 2015 National Money ShowSM, March 5-7, in Portland, Oregon.
Third place was awarded to Simcha Laib Kuritzky for “Boy for Sale? Middle Eastern Ingots for the Redemption of the Firstborn Son.”
The Radford Stearns Memorial Award for People’s Choice, determined by votes from convention attendees, was presented to Thomas J. Uram for “The U.S. Two Cent Piece 1864-1873 with Major Varieties.”
The National Coin Week Award was presented to Young Numismatist Alexander Mous for his exhibit “Alphabet Soup.” Mous will receive a full scholarship to a future ANA Summer Seminar, an award endowed by numismatist John Albanese. Mous also won third place for “Coins of Morocco: Reform Coinage 1960 to Date.” Second place was awarded to Richard Jozefiak for “The Start of a New Collectable—The Innovation of the First Elongated Souvenir Coins at the 1893 Columbian Exposition in Chicago.”
National Coin Week exhibits are intended to be suitable for display in libraries and schools with a $250 limit on the value of the materials in this competition. For more information on National Coin Week, go to NationalCoinWeek.org.
Radford Stearns Memorial awards were also presented in six classes. This year, 35 competitive and two non-competitive exhibits were displayed in the Collector Exhibits area by 24 exhibitors.
Applications to exhibit at the 2015 World’s Fair of MoneySM, Aug. 11-15, in Rosemont, Ill., are due June 19. Applications, rules and exhibiting schedules can be found at WorldsFairofMoney.com or by emailing exhibits@money.org. For more information on rules and applications, call 719-482-9849.

Great accomplishments to all!

Nicely Done. Thanks for all the info!