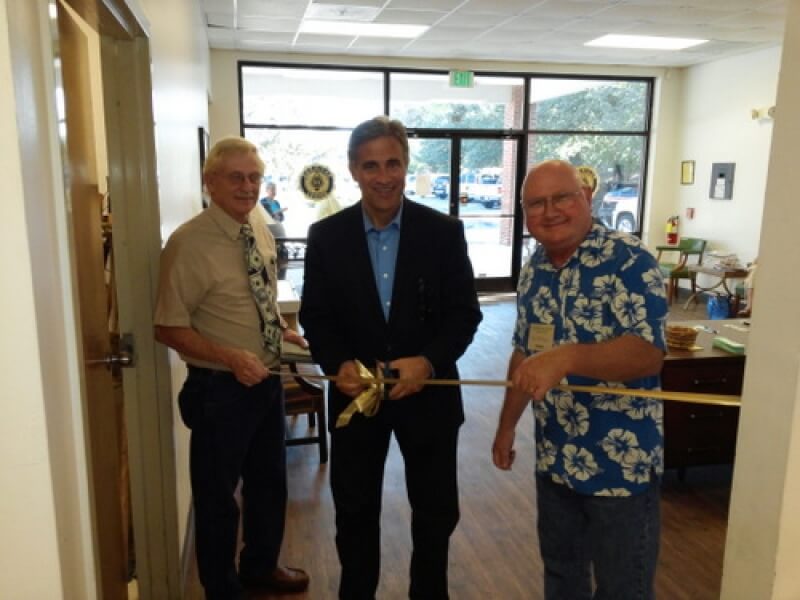 Our Fall Coin Show on October 18 and 19 went off without a hitch. Wilmington Mayor Bill Saffo opened the Show with a ribbon cutting ceremony.

Helping Mayor Saffo were LCFCC Vice-president Mike McKinnon (R) and Sgt-at-arms Jim Savage (L). The Mayor was gracious enough to tour our Show, welcoming the dealers to the City of Wilmington. A new addition at this show was a “Kid’s Korner.”

Karen Foster, Jim Savage and Karen’s daughter, Kat, made sure all 20 plus kids went away with some coins and a newly discovered interest in the hobby.

We had fair attendance considering there were very few tourists in town and the weather was perfect for outdoor activities. Hourly $10 door prizes were awarded and one lucky dealer had his name drawn for a $50 credit on his bourse fees at our April 2015 Azalea Festival Coin Show.

Thanks also go out to all the Club members who volunteered at the door, place signs, worked on publicity and helped set up the tables the evening before the Show.

The October 8th meeting of the Lower Cape Fear Coin Club was attended by twenty members and guests. The attendance prize was won by Karen Foster and the 50/50 raffle was won by Ray Flanigan. The program on ‘Love Tokens’ was presented by Gregg Frayseth who travelled from Greenville, SC and showed us examples of this fine art. Several coins, proof and mint sets from an estate were offered at very attractive prices.

Members were polled and have no problem with their full names being mentioned in this newsletter, so beginning with this issue, we will make you famous by using your last name, unless you let an officer know otherwise.

Members were asked if they had any problems or concerns about moving our meetings up to 6 p.m. and everyone thought it was a good idea. Starting in January, all Club meetings will therefore begin at 6. This will give us more time to buy, sell, trade and auction our numismatic items.

The October 22 board meeting was held at Golden Corral on New Centre Drive.  Several pressing items were on the agenda with November elections, plans for our Christmas meal, elections of 2015 officers and our Fall Coin Show results discussed.

Tentatively, our Christmas meal will be at The George Restaurant at 128 South Water Street in downtown Wilmington. To view the menu go to www.TheGeorgeRestaurant.com. As usual, each member will get a 50c credit on his meal for every coin show raffle ticket sold during 2014. Guests are welcome at menu prices. We will be ordering from the menu and have a room reserved which will seat 50.

Please consider volunteering for an office in our Club for 2015. YOUR ideas are needed to keep the Club vibrant. You may raise your hand at the November meeting when Election Chairman Bob Neale asks for nominations, contact him by phone at 910-799-2024 or email at RNeale57@gmail.com. It would be nice to have two members run for every office.

The next meeting of the Lower Cape Fear Coin Club will be held on November 12 at the Carolina BBQ Restaurant at 1602 S. College Road. The meeting starts at 7 p.m. but come early to eat and gab. O. T. Thompson will present a program on “Plaster Molds.” If you have ANY, bring them to the meeting so we all can view them.

A scale model of a Janvier reducing machine will also be on display. These machines were used to reduce designs from molds to die hubs until the computer age.

The next Board meeting will be held on November 19 at Carolina BBQ at 1602 South College Rd. at 6p.m. It may take a while to adapt to the new starting time.

** We DO have Club members going to this coin show. Contact O. T. if you want to carpool.

Please mark your calendars now so you won’t forget our meeting dates during the year. The remaining 2014 regular meetings will be held on November 12 and December 10 (Supper). The board meetings will be on, November 19 and December 17. (These meetings were moved up a week due to the holidays.) The meetings in 2015 will be held as closely as possible to the second Wednesday of every month. Mark your calendars now before you forget.

O. T. and guest Gregg Frayseth attended the Jacksonville Coin Club meeting on October 9. O. T. gave a program on error coins. It was quite appropriate for them to be together on this special day in Norwegian history. Both are of 100 percent pure Norwegian extraction where this day, Leif Ericson Day, is still celebrated in their native Minnesota. Yes, even this holiday, like the discovery of America, was well ahead of the guy named Columbus.

The newly revamped website www.money.org is a project of the American Numismatic Association. Our Club is a 50-year member of the ANA. Everything you want to know about the ANA is on this site. Soon our newsletter will be available for the world to see on this site and will give us national as well as international exposure.

They went on sale on October 28 at $99.95 each. On the first day of sale, 85,670 sets were sold. Next up will be the Gettysburg ATB quarter, which should generate much demand as 2015 marks the 150th anniversary of the end of the Civil War.

June 2015, ‘How to use eBay’. (Hopefully a Club member will have a computer and screen to use.)

Please volunteer to give a five-minute talk on one of your interests. Let Mike McKinnon know what YOU would like to learn or what YOU want to talk about.

Work on our April Azalea Festival Coin Show is well underway. We already have 22 tables under contract! Our NEW LOCATION at the Elk’s Lodge on Oleander Drive will offer a few new things that should please everyone.

Our old light blue Club banner should be in possession of somebody in the Club. Please check your attic and/or garage and let Mike McKinnon know that you have it. It measures approximately 3’ x 4’, is light blue in color and has our old logo embroidered on it.