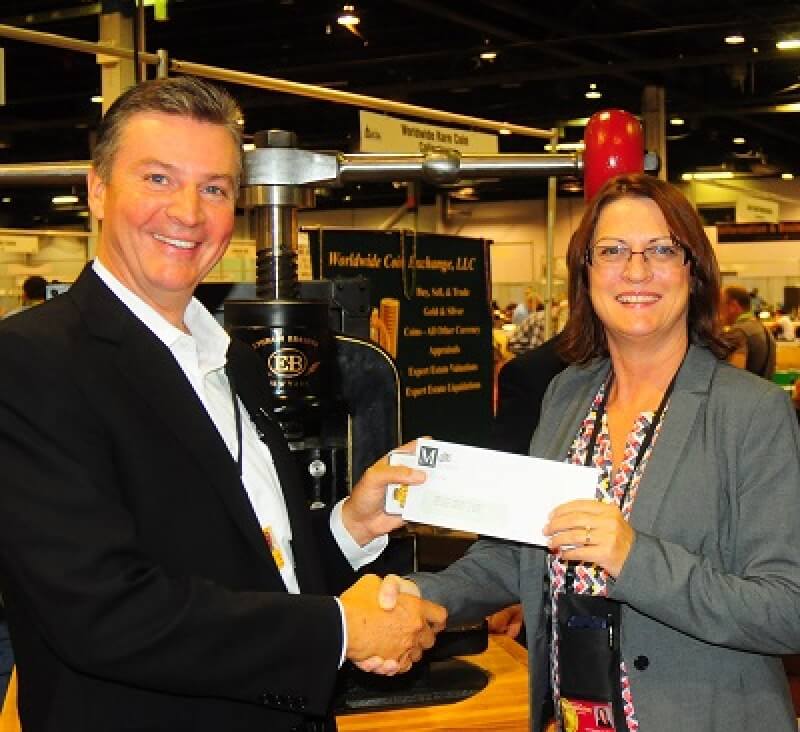 Adam Crum, owner of Monaco Rare Coins, donated $50,000 to the American Numismatic Association on Saturday, Aug. 9, the final day of the 2014 World's Fair of MoneySM in Rosemont, Illinois. Accepting on behalf of the ANA was Executive Director Kim Kiick.

Crum's donation is earmarked for the continued development and enhancement of the ANA's new website, Money.org.

Crum's company, Monaco Rare Coins, exhibited the 1787 Brasher Gold Doubloon at the World's Fair of Money this year, the first time the coin had been exhibited in the Midwest for more than 20 years. Monaco also struck and sold 500 reproductions of the Brasher Doubloon on a hand-operated press at the World's Fair of Money. The replicas are comprised of 26.4 grams of .9999 fine gold and are dated 2014. Crum said that Monaco will continue to strike the replicas as collector demand dictates, and $50 from each replica will be donated to the ANA.

The first of the 500 replicas produced at the World's Fair of Money was donated to the Edward C. Rochette Money Museum.

Very generous gift. I see this company on TV all the time trying to get our business. Nice to see another side of them. Great picture too. I'm jealous I couldn't be there. Very cool coin press.

Can't wait until all our 127 years of The Numismatist will be digitized and available to our membership online. Our goal for this project kickoff is at the NMS Portland Show in March 2014.

Hope to get one of these some day. These have a much higher "cool" factor to me than the gold Kennedy halves.

Great gift, and great pic! I stopped by the booth and watched some of the dubloons being struck, it was pretty neat to see. :)

Those doubloon replicas sound cool, and it is awesome that the ANA is receiving donations!