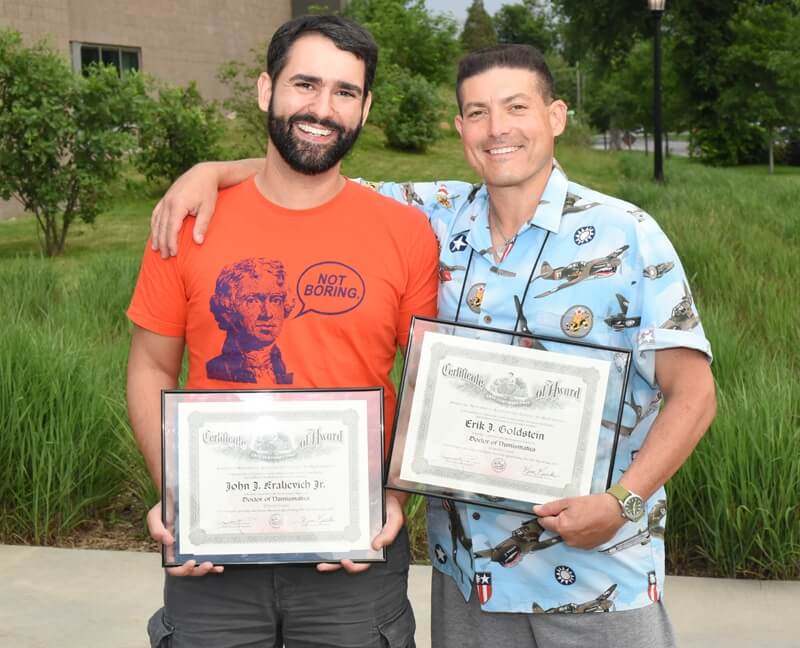 Duo has taught Summer Seminar courses together since 2004

Longtime American Numismatic Association members Erik Goldstein and John Kraljevich were awarded honorary Doctor of Numismatics degrees from the Florence Schook School of Numismatics on Thursday, June 24, at the Session 1 graduation banquet for the 2015 ANA Summer Seminar.
Kraljevich and Goldstein have paired to teach courses in colonial numismatics at Summer Seminar since 2004.
Goldstein is the curator of Mechanical Arts and Numismatics at the Colonial Williamsburg Foundation in Virginia, a position he has held for almost 13 years. He is also an award-winning researcher and writer whose work has appeared in numerous numismatic publications, including The Numismatist.
“I’m one of the luckiest guys alive,” Goldstein said after receiving his honor. “I get paid to do for a living something I would do anyway. I’m just flattered.”
Kraljevich built a career as a writer, researcher and cataloger before founding John Kraljevich Americana in 2007. He has attended Summer Seminar regularly for more than 25 years, as a student and later as an instructor starting in 2000. He was the ANA’s Young Numismatist of the Year in 1993 and was honored with the Glenn Smedley Award in 2011.
“I’m touched beyond belief,” Kraljevich said. “Summer Seminar has meant so much to me over the years. So many friendships come from here.”
The American Numismatic Association is a congressionally chartered nonprofit educational organization dedicated to encouraging people to study and collect money and related items. The ANA helps its 25,500 members and the public discover and explore the world of money through its vast array of education and outreach programs, as well as its museum, library, publications, conventions and seminars. For more information, call 719-632-2646 or go to www.money.org.
Tags
Categories
Archive
Share this on: