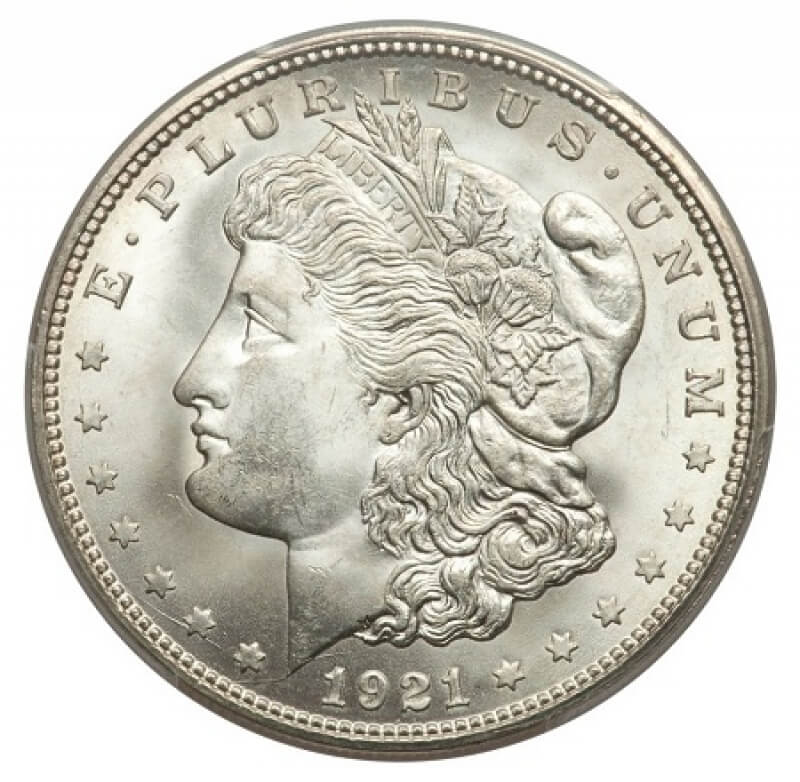 I am a U.S. Morgan Silver Dollar. I was made at the Denver Mint in Denver, Colorado in 1921, the last year before the new Peace dollars would be minted.  I was designed by a man named Morgan who chose the bald eagle for my reverse design.  On the obverse, that is my front, Mr. Morgan chose to represent Lady Liberty, Morgan wanted to depict an American woman rather than the usual Greek–style figures that were generally used on coins. Mr. Morgan chose Anna Williams of Philadelphia as the model. When I was first distributed from the mint into circulation, I was given to a very old person who dropped me in the couch cushions when he laid down for a nap.  The hit song for 1921 was “All By Myself” but as I joined several other coins of various different denominations, we spent many days in that couch dancing to a different tune that year.   One day his grandson came over and started digging in the couch cushions.  He asked if he could keep the change he found there and his grandpa told him yes.  It was the first time some of us had been out of the couch in years.  I blinked a lot because it was so bright as his grandson kept flipping me up and quickly catching me again, giving me a terrible headache. Since I could not take currency sized aspirin, there was no relief in sight.

In 1929, his dad asked where he had gotten such a huge coin. The boy answered that he had gotten me from his grandfather. His father said that they needed to coin to pay for food for the whole family because he was out of work it was something called the Great Depression.  He asked if his son would help out.  The boy went grocery shopping with his dad and laid me on a table where another boy placed four bags of food that I must have been equal to. It took the father and son both arms to carry the bags out of the store.  Then the grocery clerk swiped me up and put me into a drawer with others of my kind.

I was kept in the grocery store drawer in West Plains, Missouri until one day in 1931 when the store was robbed. Some mean men, Ma Barker’s sons (Don’t ask me how I knew.), dumped out the drawer into a bag and hefted us onto his back and ran out of the store into a car that was parked just outside.  I heard some loud noises and hoped that the grocery clerk was not harmed.

It did not seem long when the bag was opened and a hand reached down and grabbed some of us.  He made it rain coins in the car and laughed a lot. I heard a female voice too.  They called her Ma.  About an hour later, the car came to a slow but sudden stop.  I heard then men talking.  They had run out of gas.  Then another hand reached in and grabbed me.  He used me to pay for the gas at gas station. He said he did not want the police to catch him holding up the gas station. The clerk accidently dropped me and I rolled under the rug behind the counter.  There I stayed for a few years, all by myself this time.

One day in 1934, the gas station assistant crawled under the counter to clean and started picking up paper wrappers and found me under the rug.   He placed me in his pocket to bring home with him.  This assistant was named Jack Murray. He had a silver dollar collection and placed me in with others of my kind after cleaning me up.  It was a great party to see the others.  He later put me in a place of great honor, into his belt buckle, where I could see the world.  I went everywhere with Jack.  I never saw a dark pocket or drawer again.

Jack Murray did not have any children of his own, but had many nephews and nieces.  His silver dollar collection started dwindling because he gave the others away to each niece and nephew after they were born.  One day in 1999, his great nephew, Joey Fenley came to visit in Springfield, Missouri.  Jack took me out of his belt buckle and gave me to the most adorable, four month old baby that I had ever seen. The baby at first tried to eat me, but decided against it. The baby’s parents used me to start a coin collection for baby Joey.  Over the years I have seen Joey’s coin collection grow and grow and I look forward to meeting the new coins Joey adds to his collection.

Well I must say very enjoyable reading. Very good excellent. I wonder what coin I would be. Thanks. Mike

Very nice. The coin in the photo looks exceptional for a 1921 Morgan. Choice 1921 Morgans are hard to find.

I really like the story, I wish this one was one of the winners!

What a brilliant idea, using Joey in your own story. Very well researched. I am always impressed by you Young Numistmasists' imagination and new ways of seeing the problems presented to you. Very well done indeed!