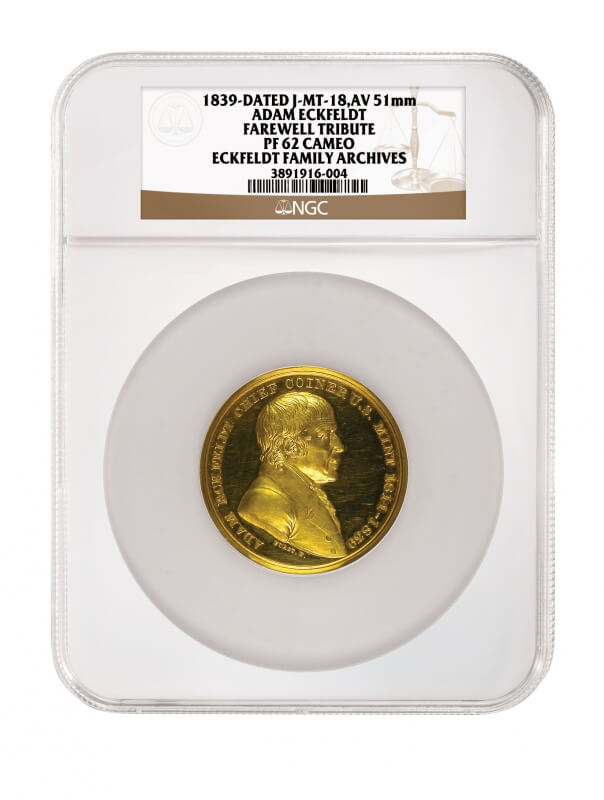 SARASOTA, Fla. (July 31, 2014) — Numismatic Guaranty Corporation® (NGC®) will display three medals and an 1803 Eagle certified by NGC as well as several Presidentially signed appointments from the Eckfeldt Family Archives at the ANA World's Fair of Money in Chicago, August 5-9, 2014.

The Eckfeldts are well known to numismatists for their extensive history of employment with the US Mint during its first 100 years. The three large, gold US Mint medals and an 1803 Eaglgraded NGC MS 61 are labeled Eckfeldt Family Archives in recognition of their historic provenance. NGC will display three medals, an 1803 dollar, and several Presidentially signed appointments from the Eckfeldt Family Archives at the ANA World's Fair of Money in Chicago, August 5-9, 2014.

The name Eckfeldt is synonymous with the first century of the United States Mint. Indeed, Eckfeldts were employed at the Philadelphia Mint as late as 1930. Blacksmith John JacobEckfeldt (1733-1818),a native of Nuremberg in Bavaria, immigrated to Philadelphia in the 1760s and operated a machine shop. There he furnished dies to Robert Morris for the Nova Constellation coppers in 1783 and also provided the US Mint with its first screw press. His son [John] Adam Eckfeldt (1769-1852) is believed to have created the dies for the first federal half cents of 1793, and he gained regular employment at the Philadelphia Mint two years later as an assistant to Coiner Henry Voigt. Adam Eckfeldt then succeeded Voight upon the latter’s death in 1814 and held that office until his retirement in 1839. He remained a familiar presence at the mint until his own death 13 years later, volunteering his immense expertise.

The first of three gold medals certified by NGC is an 1839-dated issue honoring Adam Eckfeldtupon his retirement (Julian MT-18a). The splendid profile bust of Mr. Eckfeldt was engraved by Moritz Furst, and researcher R. W. Julian attributed the inscription-only reverse to Chief Coiner Franklin Peale. The extremely rare gold impression measures 51mm and has been graded by NGC as PF 62 Cameo.

Among the successive generations of Eckfeldt Family members employed by the Mint was Adam’s grandson Jacob Bausch Eckfeldt (1846-1938). He served the Philadelphia Mint from 1865 to 1930, and his 60th anniversary in 1925 was recognized with a handsome, 51mm gold medal certified by NGC as PF 66. It features an eagle in profile that George T. Morgan first used on the reverse of the US Assay Commission medal in 1906. This is most appropriate, as Eckfeldt had served as the Mint’s assayer since 1881. So esteemed was Jacob B. Eckfeldt that yet another gold medal was prepared for him upon his retirement in 1930. Graded PF 67 by NGC, this medal is rectangular with an arched top and measures 57mm x 42mm. It features a handsome profile bust of J. B. Eckfeldt that was sculpted by US Mint Sculptor/Engraver Adam Pietz in 1928. Its reverse includes an inscription of tribute from Eckfeldt’s fellow employees. Like the 1925 medal, it does not appear within the US Mint’s own catalog and may be unique.

To view the selections from the Eckfeldt Family Archives, visit NGC booth #402 at the ANA World’s Fair of Money, August 5-9, 2014.

About Numismatic Guaranty Corporation® (NGC®) NGC, the world's largest and most respected third-party coin grading service, was founded in 1987. From the beginning, NGC has committed itself to developing an impartial, trusted standard of consistent and accurate grading. To uphold this commitment, NGC's full-time grading professionals are no longer active in the commercial coin marketplace, and are prohibited from buying or selling coins to ensure impartiality. As NGC has grown to become the leader in third-party grading services, we have maintained a steadfast and uncompromising commitment to this standard. Learn more at NGCcoin.com.