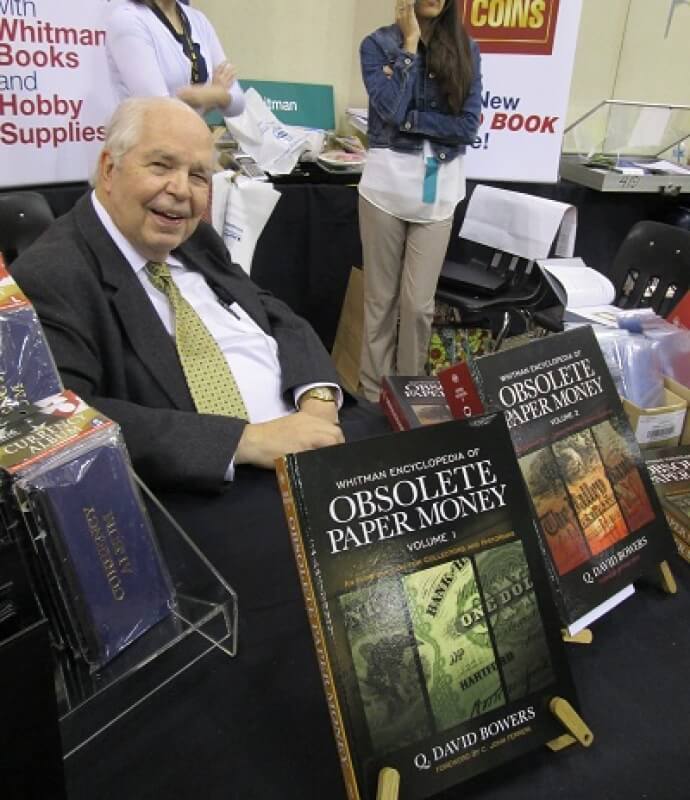 (Atlanta, Georgia, June 20, 2014) — Q. David Bowers, the “Dean of American Numismatics,” was a featured speaker at the 38th annual Memphis International Paper Money Show on Friday, June 13, 2014. He presented an insider’s view of the rarity, pricing, and market for obsolete currency, and introduced the first two volumes of the new Whitman Encyclopedia of Obsolete Paper Money.

Obsolete notes are currency released from 1782 to 1866, before the modern era of National Banks and the Federal Reserve. Over the course of these decades more than 3,000 state-chartered banks issued their own paper money for day-to-day commerce, in thousands of colorful and ornate varieties.

Also presenting with Bowers were Whitman publisher Dennis Tucker (who talked about the Whitman Encyclopedia, which is expected to fill 14 volumes of 400 to 800 pages each) and senior associate editor Caitlyn Mitchell (who discussed her introduction to numismatics and immersion in the massive book project).

In the Whitman Encyclopedia of Obsolete Paper Money Bowers has compiled decades of research from 18th- and 19th-century bank reports, contemporary newspapers, and other primary sources. He gives the history of every state, every town and city, and every bank that issued this uniquely American currency. Each note is studied in detail, and thousands are pictured in full color, with information on grading, rarity, values in multiple grades, significant auction results, advice for collectors, and other valuable guidance.

In his Memphis presentation, Bowers talked about factors that make collecting obsoletes such a fascinating hobby: the nefarious activities of counterfeiters, the introduction of new print technologies, the development of security features, the artistry and design of the notes’ beautiful engraved vignettes, their close connection to so much American history. He explored popular vignettes (such as Santa Claus) that can dramatically increase demand for a note and thus its market value. And he explained why some notes are common in high grades but can still be collected very affordably, while others are rarely seen and can be expensive. “The field of obsoletes is laden with thousands of inexpensive rarities—good opportunities for collectors,” Bowers observed.

The presentation filled the room with an audience of 49 people, most of them active collectors of obsolete paper money.

Bowers, Tucker, and Mitchell encourage collectors and researchers to get involved with the multiple-volume project. Volumes 1 and 2 debuted at the Memphis Show, offering an introduction to the hobby and full coverage of Connecticut, Maine, and New Hampshire. Volumes 3 and 4, currently in development, finish up New England with coverage of Massachusetts, Rhode Island, and Vermont. After New England, future books will cover the Southern states, the Mid-Atlantic states, the Midwest, and territories.

At the American Numismatic Association World’s Fair of Money (2 p.m., August 7, 2014), Bowers and Tucker will present “Obsolete Paper Money: History, Rarity, and Today’s Market,” including an opportunity for questions-and-answers with the audience.

The Memphis show, held at the Cook Convention Center, is the premier annual convention dedicated to collectors and dealers of paper money. Its free series of educational programs often includes the latest research and announcements of new findings from the hobby’s experts.

Whitman Publishing is a leading publisher in the Antiques and Collectibles field, online at Whitman.com.

Got a question about U.S. Paper Money or other currency? Check out the Frequently Asked Questions
Tags
Categories
Archive
Share this on:

This man has written so many books and educated so many collectors it's unbelievable.

I know what book to look for!