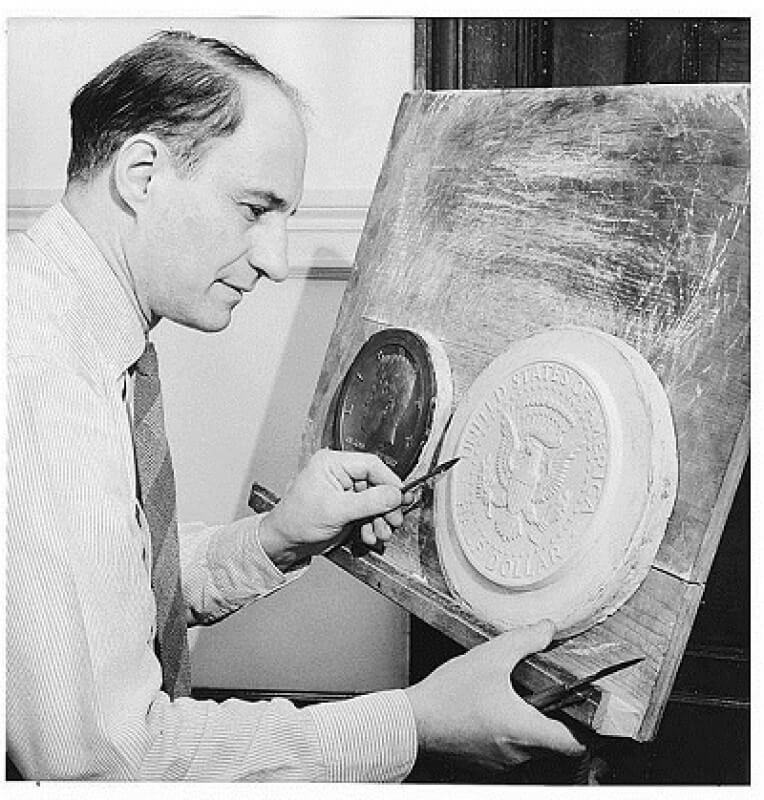 If you carry loose change there’s a strong chance you’re carrying Frank Gasparro’s artwork in your pocket. Pull out your coins and check for a cent with the Lincoln Memorial on the reverse. If you do, take a moment to look it over because you’re holding Gasparro’s pride and joy.

Before Gasparro was Chief Engraver he served as an assistant to the Chief Engraver at the U.S. Mint. With a couple of years of work under his belt he entered a contest to design the reverse of the cent. In 1959, on the 150th anniversary of Lincoln’s birth, Gasparro’s entry was selected to replace the “wheat ears” design that had previously been on the back of the Lincoln portrait. He often said that this was his greatest achievement. It wasn’t until several years later that Gasparro became the 10th Chief Engraver of the U.S. Mint.

In addition to his work on the cent, Gasparro designed both sides of the Dwight Eisenhower and Susan B. Anthony dollar coins, the tails side of the Kennedy half-dollar, several medals and a couple of coins used by other countries.

Gasparro passed away on January 16, 1981, in Havertown, Penn., at the age of 92. After his death, his daughter, Christina Gasparro Hansen, spoke about some memories she had of her father and his legacy. She said that he was always very proud of his work on the cent. He was known to hold a cent up to the cashier at the grocery store and tell them it was his artwork on the reverse.

A collection of Gasparro’s personal papers was donated to the Dwight N. Manley Numismatic Library in 2012 by Gasparro's daughter. The archive consists of 97 folders arranged by topic and features Gasparro's notes and original sketches; personal correspondence with notable figures such as Shirley Temple Black, Rosalynn Carter and others; and much more. The papers give major insights into Gasparro's artistic process, his thoughts on coin design and his contemporaries.

Trivia: There’s a tiny FG for “Frank Gasparro” on the lower right side of the Lincoln Memorial design on the cent.
Tags
Categories
Archive
Share this on:

That's a fantastic photo of him at work. Thanks!