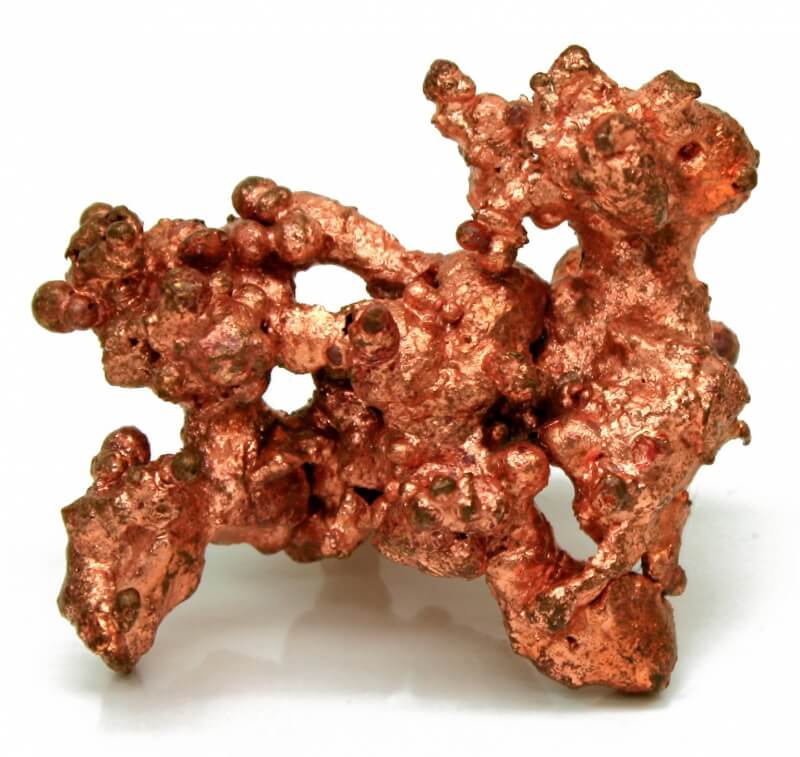 One of the most fundamental and often underappreciated characteristic of numismatic objects is the material it is made out of. However, the science behind metals (its chemistry, physics, and metallurgy) can explain many of the unique characteristics of the coins we study, as well as offer an interesting digression from typical numismatic study. With this in mind, and a casual interest in mineral collecting as well, I thought I could explore this new tangent with regards to some of my favorite coins, including Early American coppers. Understanding the basis and namesake of these base metal coins, copper, presents an entirely new view of their history and origins.

To start off with some basic physical properties, copper is the 29th element on the periodic table of the elements and has a mass of 63.55 AMU (Atomic Mass Units).  The symbol representing copper on the periodic table, Cu, actually stands for Cuprum, which is a Latin shortening of one of its first names, Cyprium. Copper was so called because of its origin. In ancient times, the first major source of copper in the Mediterranean world was found on the island of Cyprus, located just south of present day Turkey and, ironically, home to one of my other major collections. In any case, these were the very mines that supplied the Roman Empire with copper and subsequently graced the metal’s name with the island’s name. Today, of course, many more sources of copper exist, including mines in Chile, Utah, New Mexico, Mongolia, and, of local interest to me, in Michigan’s Upper Peninsula. For many years now my family and I have vacationed up to a few beautiful spots on the western edge of the peninsula, a place with a fascinating geologic history and many derelict mines. Only a few decades ago, the area was home to some of the largest mines, containing some of the purest native copper, in the world; it has since become more costly than other (especially international) sources and shut down. However, there is still an active mineral collecting scene there, as well as a company that operates out of the Caledonia copper mine near Ontonagon, Michigan, that lets tourists and collectors purchase copper ore piles and take home beautiful native copper specimens. Every time I visit, I buy one of these piles and inevitably find pounds and pounds of native copper to take home.

For as long as copper has been mined, copper has been used in decorations, jewelry, coins, weapons, machines, and modern electronics. Much of its unique beauty comes from the fact that it is one of only four non-silver/gray metals, the other three being gold (yellow), Cesium (yellow), and Osmium (deep purple). In addition to its aesthetic uses, copper, which is second in electrical conductivity only to silver, is also used extensively in electronics and wiring due to its high conductivity (and relative inexpensiveness compared to silver). The metal also has a wide variety of uses due to its hardness, or rather its lack thereof, its ability to be alloyed, and its durability. Copper is a very soft and thus easily workable metal, and only slightly less so than gold. However, it can be alloyed, or mixed, with other metals in order to harden and strengthen it. For example, bronze, an alloy of copper that contains a small percentage of tin and zinc, has been used in American numismatics to coin the likes of the Indian Head penny, most wheat pennies, two-cent pieces, and numerous other coins and tokens. Brass is another such alloy made with varying levels of zinc while cupronickel, which is almost ubiquitous in modern coinage, is copper alloyed with nickel. The composition of Early American copper coins, however, is highly variable thanks to the early mint’s difficulty with obtaining reliable sources of copper. Often, the early mint had to buy and melt copper scraps or other copper coins in order to mint their coins, and thus EAC’s are often riddled with impurities that manifested in different striking qualities, unique patterns of corrosion, and more. Although these coins are more often than not found oxidized and corroded due in part to their age and heavy use, copper is a generally unreactive metal and is durable as a coining metal, hence its widespread use as such.

From the mine to the factory to the mint, copper remains a fascinating and robust element. Understanding where it comes from and the science behind its physical properties reveals much about the coins made of such a metal. Thus I urge every numismatist to stop every now and then to consider the metallurgical aspects of their collections with the hopes that knowing more will help to breed a deeper sense of appreciation and understanding of these wonderful numismatic objects.

Nice article! It was very well formulated and detailed. Have you ever seen or heard of coins made of Osmium? If so, were they actually purple?