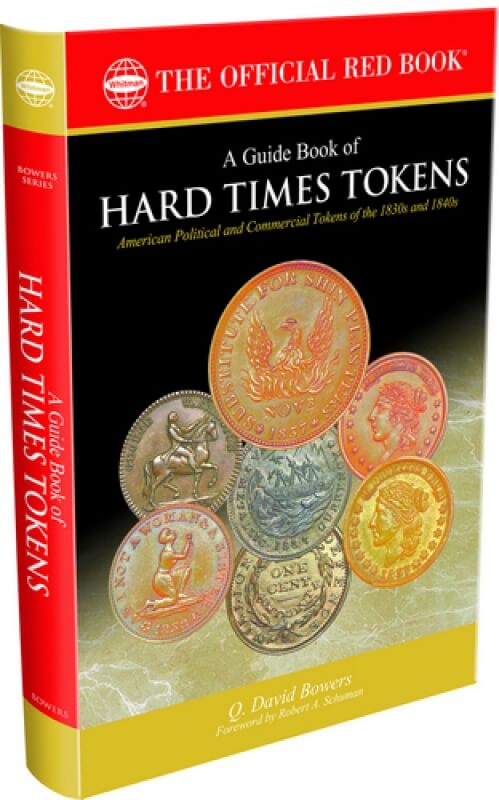 (Atlanta, Georgia) — Whitman Publishing announces the release of A Guide Book of Hard Times Tokens, by Q. David Bowers. The 320-page softcover book (number 17 in the popular Bowers Series) will debut at the Whitman Coin and Collectibles Expo in Baltimore, March 26, 2015. In the meantime copies can be pre-ordered from booksellers and hobby shops nationwide, and online (including at www.Whitman.com), for $29.95. The book can also be borrowed for free as a benefit of membership in the American Numismatic Association, through the Dwight N. Manley Numismatic Library.

Privately minted “Hard Times” tokens are tangible reminders of a turbulent period in America. Their political and commercial motifs are diverse, reflecting the economic and social scene of the pre–Civil War era of Andrew Jackson (the 1830s and 1840s).

Award-winning author Q. David Bowers includes recent research findings as well as information he has gathered since the 1950s; hundreds of high-resolution images; and current market pricing in multiple grades. He covers the historical context of the Hard Times of 1832 to 1844, during which President Andrew Jackson fought the controversial Second Bank of the United States. Many situations and incidents are presented in a narrative style, including the story of Peggy (O’Neal) Eaton, the controversial belle of Washington, D.C., whose flirtatious actions rearranged Jackson’s Cabinet and was responsible for Martin Van Buren being nominated for president. It was an era of financial collapse and nationwide depression. Private minters and businessmen created cent-sized copper tokens to fill the gap when official U.S. coins became scarce. Many of these have colorful and satirical political themes, while others advertise local businesses, making them a treasure trove for historians. Bowers catalogs these tokens with detailed information for sellers, collectors, and researchers.

“Numismatists find Hard Times tokens fascinating to study,” says Bowers. “There are hundreds of issues to collect, and most of them are very affordable. For the specialist who enjoys a challenge, there are also some major rarities in the series.”

Numismatic researcher and Hard Times expert Robert A. Schuman calls the book “groundbreaking,” “beyond the scope and depth of anything previously published,” and “a clear, complete, verified, carefully focused, and well-photographed listing of these important pieces.”

The Guide Book of Hard Times Tokens also includes biographies of die engravers, histories of issuing firms, narratives about the political personalities involved, a catalog of fantasy pieces, a history of the market and collector interest going back to the mid-1800s, extensive notes, a bibliography, charts cross-referenced to the older Low and Rulau cataloging systems, and an index. Much of its information has never been published in book form before.

Whitman publisher Dennis Tucker notes that Hard Times tokens have been summarized in the Guide Book of United States Coins (the hobby’s best-selling annual price guide, known as the Red Book) since the first edition in 1946. “This is the first time collectors have had an expanded, full-color catalog to these remarkable pieces of American history,” Tucker says.

If anyone would like to see or know more about Hard Times Tokens please take a look at the "POST YOUR HARD TIMES TOKENS!" thread on the ANA exonumia forums. Better yet, post some pics of your own HTTs there!

I don't know much about the subject matter, but I do know anything written by Q. David Bowers is worth reading!

I would get into reading that. I don't own any or know much about them but I think I will pick this up.

I haven't read a book by Q. David Bowers that I din't like. Great man. He even personally autographed a book I bought through his auction site!

A long overdue and much anticipated volume of study. I can't wait to get a copy!