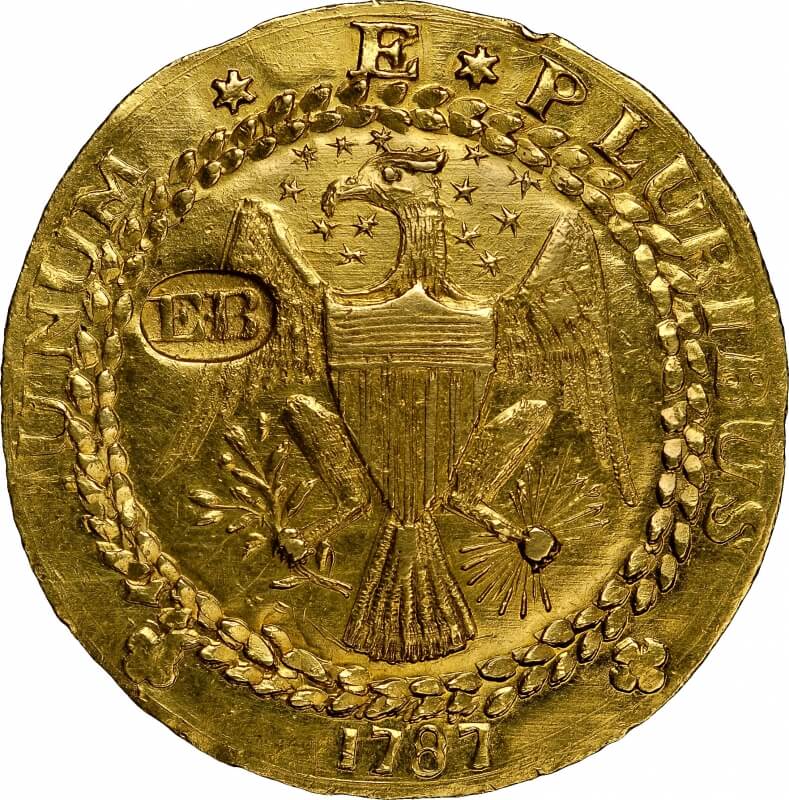 The Brasher Doubloon has a mystique all its own among American coins. Produced by Ephraim Brasher, a well-known New York jeweler and goldsmith and a neighbor of George Washington’s while he stayed in New York, the Brasher Doubloon is based on the weight standard of Spanish-American gold coinage and was valued at $15. These pieces were the first gold coins produced in the U.S. intended for circulation. The story behind the creation of these pieces highlights a time when American money was not yet standardized and when private citizens could produce coinage, as Ephraim did. The Brasher Doubloon is the first truly American gold coin and is the forebear of all gold struck by the United States.

This Brasher Doubloon display at the 2015 Portland National Money Show is made possible by Monaco Rare Coins and Adam Crum.

Brasher used the arms of the State of New York for the obverse of his Doubloon; for its reverse he chose the Great Seal of the United States. The obverse shows the sun rising over mountains and sea with “Brasher” in small letters beneath the waves. The legend reads NOVA EBORACA COLUMBIA EXCELSIOR (New York, America, Ever Higher) and symbolizes a bright new day for the new nation. The bald eagle had recently been chosen by Congress as the national bird and was featured on the new Great Seal. It was a natural choice for the reverse of the Doubloon along with the legend UNUM E PLURIBUS (One out of many). The reverse has Ephraim Brasher’s EB hallmark stamped either on the eagle’s wing or on its breast. There are seven Brasher Doubloons known, in two varieties, with the EB hallmark on the breast (unique) and with the hallmark on the wing.

Brasher Doubloons are an odd mix of artistic skill and amateur coining practice. An engraver’s “guide line” encircles the obverse, underlining the date and topping the lettering. Die polish lines are strong on both obverse and reverse. The edges are smooth and the rims irregular. Striking pressure was uneven, leaving the tops of certain letters and the highest design elements weak, the latter effect particularly visible on the reverse where the sun and mountain are merged.

The surfaces remain lustrous with rich yellow-gold color. Some letters show doubling. The punch on the left (facing) wing is clear with a corresponding area of flatness on the opposite side. There are scattered abrasions, with a rim nick to the northwest of the P in PLURIBUS as the most prominent identifier for this piece.

The composition is interesting, as it varies from the earlier Spanish doubloons, which were approximately 90 percent gold, 8 percent silver, and 2 percent copper. Later U.S. gold coins reversed this ratio of silver to copper, keeping the gold at 90 percent. This indicates that Brasher assayed and refined the gold himself, rather than just melting a cache of older Latin American gold pieces. The different alloy for federal gold coinage proves that the doubloons were not fantasy pieces, struck at a later date from melted down U.S. coinage.

The 1787 Brasher Doubloon will be in the Museum Showcase at the National Money Show in Portland. Show hours are 10 a.m. to 5:30 p.m. Thursday, March 5, and Friday, March 6; and 10 a.m. to 4 p.m. Saturday, March 7. ANA members are admitted free. For more information, go to NationalMoneyShow.com.
Tags
Categories
Archive
Share this on:

A wonderful, historical coin that does not get the publicity it deserves. Photo is beautiful!

Just to hold it would be a dream. Reading about it is great but not as good as holding.

That looks like such a beautiful coin! Thanks for sharing!

Great piece. Thanks for posting it!

Wish I could go there and see it. Thanks for all the info! Amazing story and history.