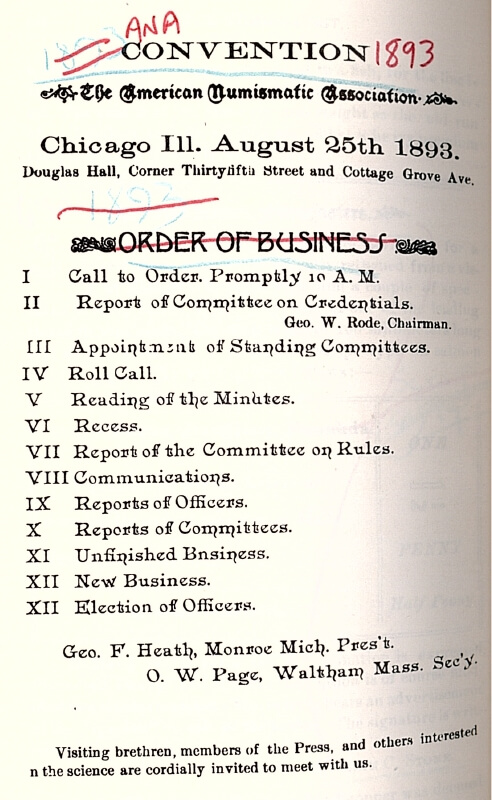 In 1893, the ANA’s annual convention (what we know today as the World’s Fair of Money) was held in Chicago at Douglas Hall at the corner of 35th street and Cottage Grove Avenue.

The photo above is a peek at the convention Order of Business. The day began with a Call to Order “promptly at 10 a.m.,” but other reports said the day really began around 10:40 a.m. After a late start, the meeting covered other important topics such as the newly elected officers and news from the committees.

Also included in The Numismatist was the Convention Program, which mentioned several classes for numismatists to attend, including:

Is This your Science My Lords?

The Historical Value of Ancient Coins.

The Convention of the Thirteen Silver Barons.

Coins, their Origin and Aid in Historical Research.

The Coinage of the Roman Empire

The Convention was called for August 25. Only 15 ANA members were present, while others were represented by proxy.

Available at the ANA Library.
Tags
Categories
Archive
Share this on:

This is so cool! Enjoyed the history lesson!

Great History, enjoy see some of past ANA.

Glad to hear it, Longstrider!

I love seeing the history of the ANA.