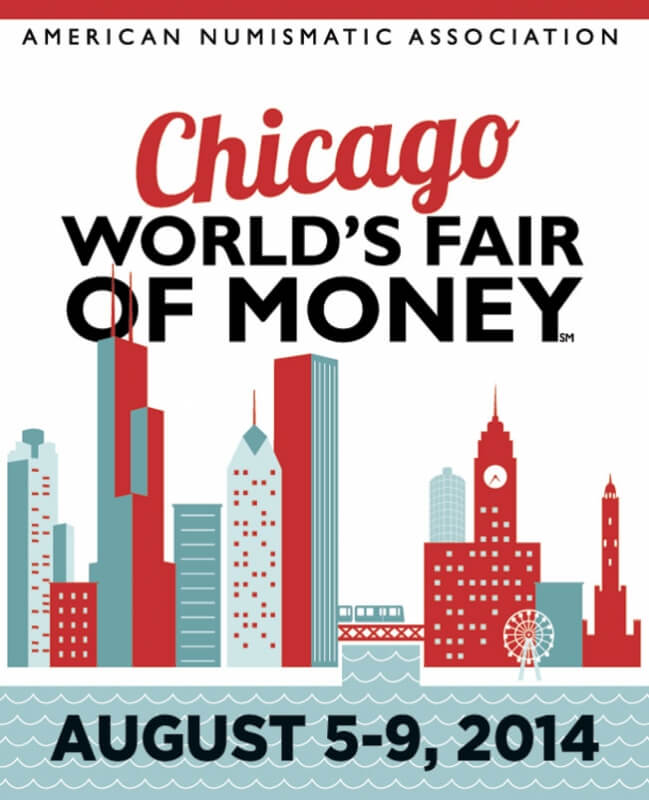 The ANA announced the launch of its new website at the show during a Money Talks presentation on Tuesday, Aug. 5. A silent auction held at the annual ANA Banquet raised more than $18,918 for the Robert Lecce Advanced Scholarship Program. A bourse of 575 table-holders is a new World’s Fair of Money record.

The website project was approved by a board vote at the 2013 World’s Fair of Money in Chicago. The ANA Technology Advisory Committee, headed by ANA Life Member James Reinders, worked with the ANA staff to launch the project in less than a year. Reinders led the Money Talks presentation on the launch.

New website features include a blogging platform open to all members, forums, private messaging, and the new MyCollections feature, which allows members to catalog their own collections and share it with other members or keep it private to themselves.

“This website is not a substitute for any other ANA activity; it is a vital connection for the ANA and its members to the world,” Reinders said. “The website is our face to millions who have never visited an ANA show, seminar or club meeting. Building new community is important for our future — the website also opens new doors for sharing among members. I invite everyone to log on and share something and discuss topics online.”

In addition to the emphasis on community and fellowship, the new Money.org website offers several other new features:

“I am impressed with this new site, but it is only the beginning,” Reinders said. “We’d like to encourage members to let us know what they want to see next with their new ANA website.”

Members can leave feedback for the new website in the Money.org forums or via email at feedback@money.org.

“When the U.S. Mint announced the sale of its dual-dated gold Kennedy commemorative coin at the World’s Fair of Money, the ANA was hopeful that the release of such a popular coin would be a boost to the hobby and increase public interest in numismatics,” said ANA Executive Director Kim Kiick. “Unfortunately, the challenges created by the mass of people trying to buy the coin became a concern for public safety, both at our show and at the U.S. Mint’s retail sites in Philadelphia, Denver and Washington, D.C.”

Public safety was the ANA’s top concern after the U.S. Mint announced that it would debut the coin at the World’s Fair of Money. Kiick commended the efforts of PPI Security, the staff of the Donald E. Stephens Convention Center, the Rosemont Police Department and ANA staff and volunteers for maintaining order. She also expressed disappointment that many of the coins were bought by people paid to stand in line.

“The intent of the U.S. Mint was to sell its allotment of 2,500 coins to 2,500 different people, putting these coins into as many different hands as possible,” Kiick said. “The hiring of proxies to stand in line and receive the coin for somebody else not only went against the spirit of the sale, it hurt the ANA. The ANA is responsible for paying for extra security and damages to the exterior of the convention center brought on by these crowds.”

While the U.S. Mint has announced that it plans to continue offering new coin releases at the World’s Fair of Money, Kiick said any future sales are contingent on whether the Mint and the ANA can put together a security and sales plan that will address the concerns raised from the Kennedy sales.

“We love having the U.S. Mint at all of our shows, and we certainly enjoy seeing the Mint bring exciting new products to the marketplace that will increase public interest in the hobby,” Kiick said. “However, the problems we experienced this year far outweigh the benefits. There will be no onsite sales in the future unless we can come up a new sales process to avoid the problems encountered at the various U.S. Mint sales locations.”

The Tuesday night Kickoff Event, Oktoberfest in August, saw 154 members turn out for the event, which featured all-you-can-eat German food, a live band and a fireworks display. It was sponsored by the Chicago Coin Company and the City of Rosemont.

The Coin Show podcast produced a two-hour live show from the World Mint Stage on Wednesday, Aug. 6. A replay at can be seen at Money.org or at CoinShowRadio.com.

A pair of two-day seminars were held before the convention: “Numismatics of Colonial America” and “Coin Grading, Problem Coins and Conservation.”

The Sundman Lecture Series, focusing on “Countries and Currency, Innovations in Numismatics,” had 44 members register for the luncheon and strong attendance throughout the day’s four free lectures.