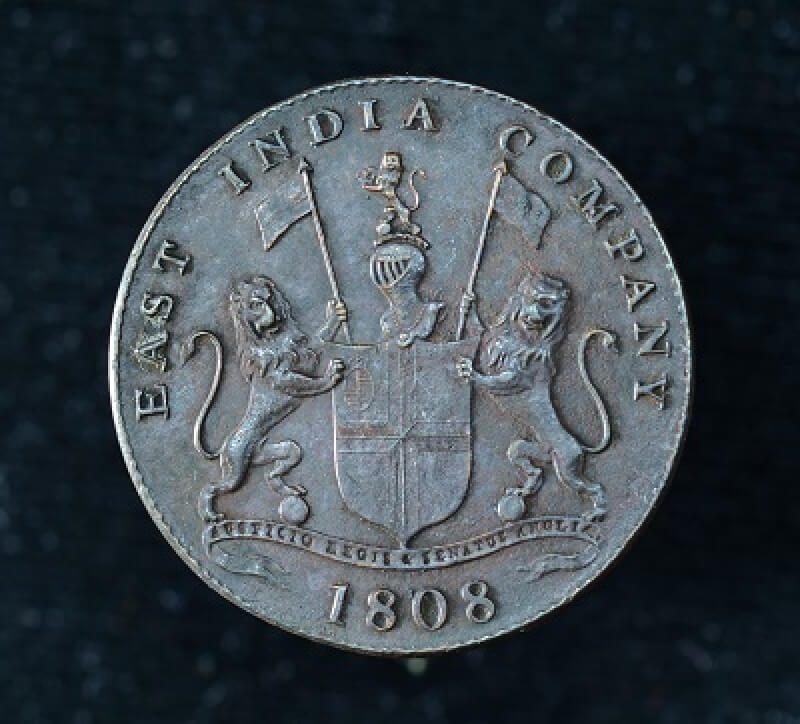 The Edward C. Rochette Money Museum’s current exhibit, “Treasures of the Deep: Galleons, Storms & Archeology” has been well-received by visitors of all ages. It features coins, ingots and other artifacts from shipwrecks off the coast of five continents, recovered from ships of several countries and kingdoms. The exhibit puts emphasis on wrecks from European discovery of the New World and subsequent colonialism around across the globe.

One of the cases explores the British East India Company, a private entity that contributed much to numismatics and underwater archeology. In 1600 Queen Elizabeth chartered the “Governor and Company of Merchants of London Trading into the East Indies,” and granted it a monopoly. Known as the East India Company (EIC), it largely traded on the Indian subcontinent. By the mid-18th century the EIC was the most profitable company in the world and the most powerful private company ever known.

For its first 20 years the EIC focused on the spice trade in the East Indies (now Indonesia), but the deep-rooted Dutch East India Company made it difficult to turn profits. Recognizing opportunities in India, England brokered exclusive trade agreements with the Mughal Empire, eventually giving the EIC a monopoly on the Indian subcontinent. Trading posts in India and China bought and sold commodities such as tea, silk, dye, opium and saltpetre (used to make gunpowder).

The EIC rapidly transformed from a trading company to a political and military powerhouse. Employees returned to England with vast sums of money and used it to create an EIC lobby in Parliament. It raised a formidable army to quell resistance from local leaders, and victory at the Battle of Plassey in 1757 established the EIC as the ruler of eastern India. Company rule was consolidated through political and military force over the next 100 years and only ended when the Indian Mutiny of 1857 forced Britain to take direct control under the British Raj. Parliament dissolved the EIC in 1874.

There were three administrative subdivisions in early British India: the Madras Presidency, Bombay Presidency and Bengal Presidency, and each had a separate coinage and monetary system. The EIC discontinued this system in 1835 and adopted a unified system of coinage throughout British India. Coins issued after 1857 were under the authority of monarch as India became part of the British Empire. Coins issued by the EIC were produced by mints across India and at the Soho Mint near Birmingham, England. This mint was established by Matthew Boulton (business partner of James Watt), who obtained the first patent for a steam coin press and provided equipment for mints in India.

British ships bound for India, called East Indiamen, could expect a journey that lasted six months: south down the coasts of Europe and Africa, around the Cape of Good Hope and north through the Indian Ocean. The route is strewn with EIC wrecks carrying valuable cargo, including the Admiral Gardner. The 813-ton East Indiaman ship was on her sixth voyage when she was wrecked off the southeast coast of England on January 25, 1809. Included in the museum display are copper 20 cash and 10 cash coins produced at the Soho Mint for the Madras Presidency and recovered from the Admiral Gardner.

The coins’ obverse reads "EAST INDIA COMPANY" above, with the company’s coat of arms at center and the date 1808 below. A ribbon above the date has an inscription reading "AUSPICIO REGIS & SENATUS ANGLIAE" (By command of the King and Parliament of England). The reverse features the denomination in Persian "Dah Kas Do Falus Ast" (Ten (20) Cash Makes Two (Four) Fulus) with the value in English below "X (XX). CASH" at the bottom. The coins are displayed courtesy of Thomas Gray.

In the 16th through the 18th centuries the Spanish empire dominated the export of silver from the New World and created what was the first piece of international currency: the Spanish dollar (8 real or “piece of eight”). This meant that a great deal of silver the English and Dutch transported to the Far East for trade were in the form of Spanish dollars. The museum’s EIC display includes two such dollars dated 1786 from the ANA collection recovered from the East Indiaman Hartwell, which sank during its maiden voyage to China on May 24 1787 off the coast of Boa Vista in the Cape Verde Islands off the coast of West Africa carrying more than 300,000 Portrait dollars – Spanish dollars produced between 1773 and the 1820s. 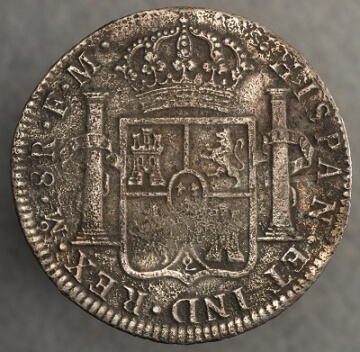 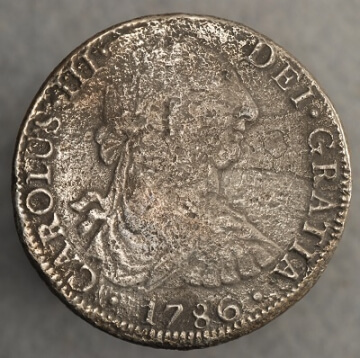 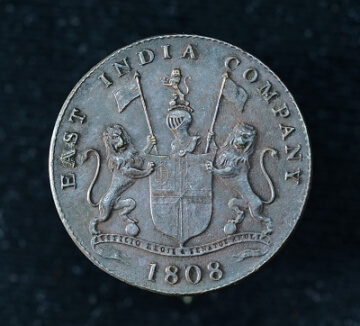 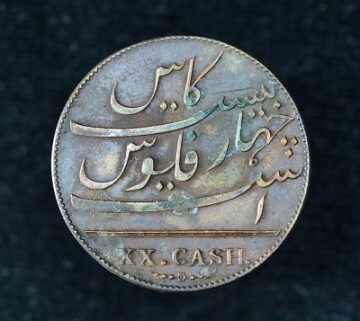 British also put out condor tokens of the trade with the West India tea company. There very nice and contain such detail for such old tokens it's remarkable. Thanks for writing the blog I picked up some good points. Take care mike

are Indian coins from after the British gov. takeover expensive/rare?

Thanks for the history lesson. I had read most of it before but it is still one of my favorite subjects.

Great story! Thanks for the detailed history lesson of the date and regions. Beautiful numismatic history!!!

Thanks for the background can you provide a good reference on the IEC?