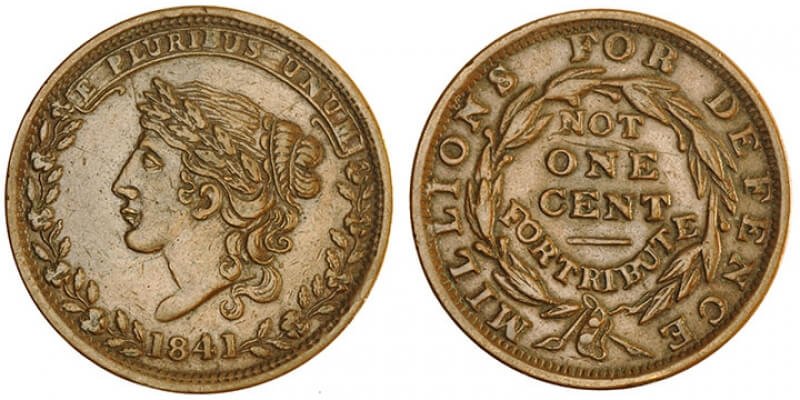 06 Sep 2015
by Douglas Mudd, Money Museum director and curator
(scroll down for large-size examples of the tokens discussed in this article)
Elections are often accompanied by partisan political messages in the newspapers, TV ads, and on the radio. As numismatists we are naturally drawn to our hobby to look for reflections of what goes on in the larger world around us – and, as expected, politics are reflected in numismatics, primarily in the form of political buttons and medals, but also including tokens and paper scrip.
Hard Times Tokens have always fascinated me for their political messages and because they were also a form of necessity money – these tokens were actually used in daily commerce for a relatively extended period, thus carrying their sometimes ephemeral messages far and wide, often after the message contained on them had any current relevance. These tokens were issued during the period from 1832-1844 when the United States went through an economic depression and several hotly contested presidential elections over the fate of the Second Bank of the United States and the powers of the Federal Treasury.
The immediate reason for the issuance of the tokens was the ongoing shortage of small change in the United States – a situation that had existed ever since the Colonial period despite the best efforts of the United States Mint.
The tokens that I find most fascinating are those dealing directly with Andrew Jackson, Martin van Buren and their policies. These tokens were issued in the period during and after the “Panic of 1837.”  This panic was the direct result of President Jackson’s attempts to control the rampant inflation affecting the country during the early to mid-1830s.
In his “Specie Circular” of July 11, 1836, Jackson required that banks and receivers of public money only accept gold or silver in payment for public lands (there was rampant speculation on Western lands going on at the time). The result was an economic disaster as gold and silver were hoarded and loans were called in. What followed was a run on the banks as everyone attempted to retrieve their savings before specie payments were suspended. The hard times began as bank after bank and business after business shut their doors forever.
The tokens of this period are divided into three main groups. The first consists of political propaganda for and against Andrew Jackson and Martin van Buren, the next of advertising pieces, and the last of cent look-alikes. Almost all of these tokens were similar in size and composition to the large cents they were meant to replace. The political messages on these pieces come from both sides of the political debate and contain many witty images and legends. Among the most common are those depicting Jackson in a strong box holding a sword and a bag of coins on the obverse with the legend I TAKE THE RESPONSIBILITY, which was paired with a number of reverses. The image refers to the fear that the presidency was too powerful if it controlled both the military and the finances of the country.
Other tokens illustrated an image of the Ship of State either sailing serenely under the Constitution, as supported by the Whig, Daniel Webster, or, on the reverse, foundering with the financial experiments of the Democrat Van Buren.
A favorite of mine is the image of the turtle carrying a strong box marked “Sub Treasury,” which refers to the slowness and insecurity of moving specie in Van Buren’s system of sub-treasuries located throughout the nation. Jackson was ruthlessly ridiculed on many of the Hard Time tokens, as was Van Buren, particularly in one example where van Buren’s inaugural speech  is quoted “I follow in the footsteps of my illustrious predecessor” – on the token a running jackass is shown (representing Jackson) leaving hoof prints.
All this goes to show that political satire and vicious attacks are not new – but at least the Hard Times tokens had a constructive use.
Tags
Categories
Archive
Share this on: 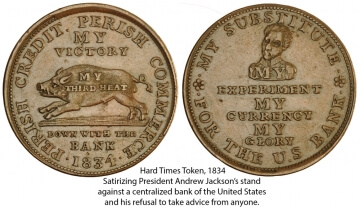 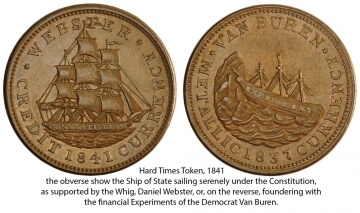 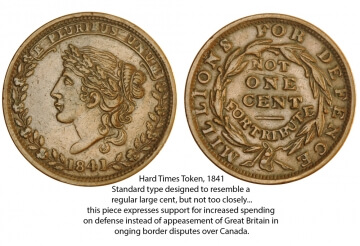 Glad I checked it out! I own mostly civil war tokens but I do have about ten hard times tokens. I love the political themes behind them. Thanks for taking the time. I try to go searching at least once every three weeks or so to see what I can pick up.mike

These are great! I love Hard Times Tokens! Thanks for such a great blog. The history behinds these tokens is amazing!

Excellent article! Thanks for the history lesson. The hard times token images are spectacular and as they say a picture is worth a thousand words. What a story they tell!!!