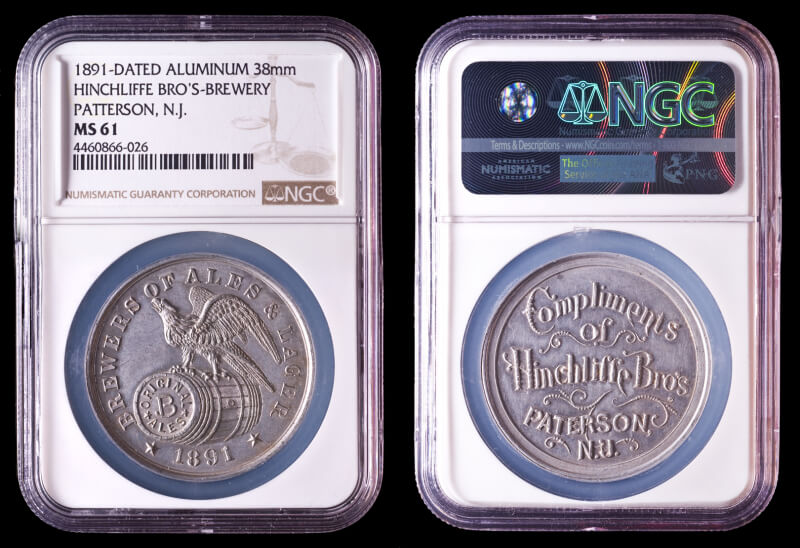 17 Jan 2019
I spent last week at FUN. I go to shows looking for additions to my collection, but I don't have dates or mint marks to fill so I keep my eye out for something interesting. I saw the Hinchliffe Brewery store card in a dealer's case and I asked to see it. The dealer, Dick Grinolds, said it was the only one he has ever seen. He collects brewery tokens himself and threw this in his case at the last minute. Yes, he named a price and I said yes. I particularly like the raised dots added in the lettering on the reverse, plus it is an early use of aluminum for a token. The process for producing aluminum was extremely expensive before 1891 and aluminum did not come into common use for tokens and medals until the 1893 World's Columbian Exposition.
John Hinchliffe immigrated from England in 1861 and founded the first brewery, Eagle Brewery, in Paterson, New Jersey. In 1863 it became the Hinchliffe Brewery & Malting Company. He later employed his three sons and in 1890 John Hinchliffe, Jr. became president of the company. In 1891.  The history is a little confused as I read it and the company likely had several name variations and partners between 1861 and 1890. The Hinchliffe Bros. name certainly dates to 1890 when their father retired. The brewery did not survive Prohibition.
Thanks to Dick, the aluminum store card now resides in my collection.

That's one that would have caught my interest also. Nice design, and size.

Oh, yeah, nice beer coupon. Takes me back to the early 60's and the Shinar Beer tokens my granpaw had.

Really beautiful! Thanks for sharing it with us!

That is a nice token. Thanks for sharing the information behind it.

Enjoyed your contribution. Thank you.

It's amazing what you can pick up at shows. Those are either dealers or collectors selling there set. In that case In would also sell a rare coin. It's great has good eye appeal rare and you got a very nice coin there. Enjoy it give it a nice home as I say well done. Mike

Thanks for the comment . After twenty five years I only bought what I liked. I do keep the books going all untouced. I like them also. Thanks again mike

A Great rare store card. I agree, those raised letters make it even nicer. Great story. I feel it's under graded. The add/label is a nice addition. Thanks.

That is a beautiful, well-designed token. You got a find!

Wonderful item. Aluminum was quite a scarce material until the 20th Century when electricity became plentiful enough to use in aluminum reduction. I have only one aluminum piece from the 19th century, from the Columbian Expo. A really lucky opportunity to add such a piece to your collection.

Enjoyed your blog. Great items to add to your collection.

Yeah, if I collected that stuff and had only seen one I would have kept it. Nice for you to have picked it up though. I like the store card design. Thanks for the article.

That's a very attractive design. I wonder what motivated Mr. Grinolds to put it up for sale? I recently bought something from a dealer in California, he told me the piece i bought was one of his favorites and he had kept it in his personal collection for several years, I guess at a certain point, every dealer has to emotionally detach from their stock.