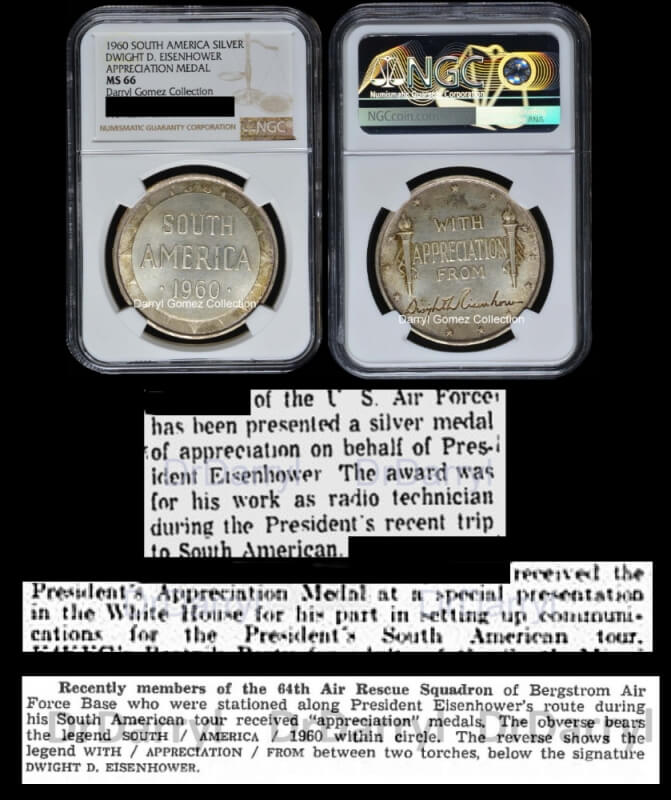 02 Jul 2018
First-ever numismatic cataloging (manufacturer (Bureau of the Mint), mintage, designer, usage, and other special numismatic information) of this U.S. Mint issue was in my 2014 book titled: The Dwight D. Eisenhower Appreciation Medals. This established the numismatic identity after a half-century of not being cataloged in numismatic resources.
In 2017, I copyrighted a paper in which I used this sentence "This research effort established the numismatic identity, historical relevancy, and proper regard as a true-to-life presidential artifact for the President of the United States special Government medal series."
How does one establish "historical relevancy"?
How about establishing "proper regard as true-to-life presidential artifact"?
One path I took (there are others) is shared in this blog : The hunt for period literature discussing the use of the POTUS sGm.  As you can see from the image, I have a recent encapsulated/graded  NGC MS66 President Eisenhower South America POTUS sGm. Below it are a few period clippings from my research literature review. Each makes reference to President Eisenhower's South America visit and his appreciation medal. The key find from these clippings is the "special presentation in the White House" (middle clipping).
From a U.S. history perspective, these are newfound historical tidbits related to President Eisenhower and his appreciation medals, thus establishing the
proper regard as a true-to-life presidential artifact!
How many true-to-life presidential artifacts are  in the numismatic category? I'm limiting this statement to non-wearable medals or "table medals".  How about from a U.S. Mint series perspective? The POTUS sGm series is the only one...

Great research! Thanks for the information.

Interesting, on a little known part of numismatics.

I can tell a lot of research and time went into this, I thank you.

Nice job of researching. I especially like the abstract you included. Thanks