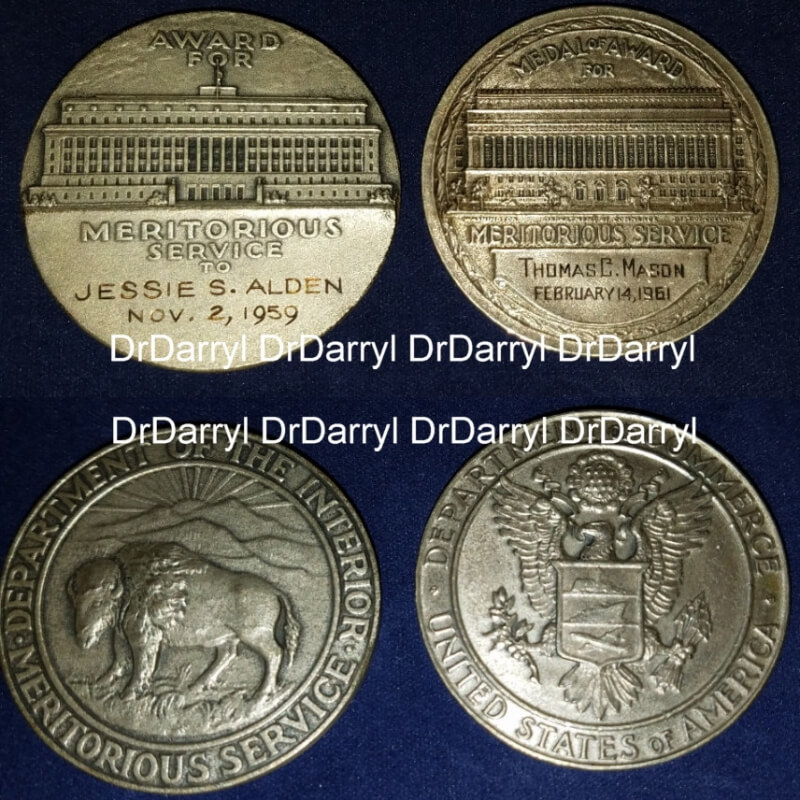 15 Dec 2017
In Part 1,  I limited the time period of my discussions from 1958 through 1962. Expanding my discussion by a few years earlier and later, I'm able to provide another example of an "unintentional medal series" manufactured by the Bureau of the Mint.

From the first  accompanying image (I only own the silver and bronze specimens), it can be said that a minimum of three types of procurements were made by the Department of the Interior.

The Department of the Interior series is composed of a Distinguished Service (gold), Meritorious Service (silver), and Commendable Service (bronze) medals. Note that the type of service award is identified  on the obverse.

The second accompanying image compares the Department of the Interior and Department of Commerce "meritorious service" (silver) medals.

It can be said that the metal type (gold, silver, and bronze) was associated to an award level (Distinguished, Meritorious , and Commendable).

It can be said that the U.S. Government agencies showcased its headquarters building in Washington DC on the medal's reverse design.

It can be said that the reverse design replicates the award level and has an engraving pad area.

It can be said that U.S. Mint engravers left their hallmark on either the obverse or reverse (Department of the Interior - Gilroy Roberts - reverse, right bottom of building)(Department of Commerce - Frank Gasparro, obverse, under right leg of eagle).

Those are beautiful! Thanks for the blog..

Very cool! Thanks for a great blog! Didn't know that these medals existed. Love the Buffalo's too!

Enjoyed the blog! Very nice to learn about different Mint medals that are not widely known.

These are special medals made for special events people and not for consumers. You can't buy them and a regular collector won't see them. Thanks for the information on these there nice to see. Mike.

These are lovely medals. I've never seen these or heard them mentioned. These are parts of numismatic history. Love the buffalo.