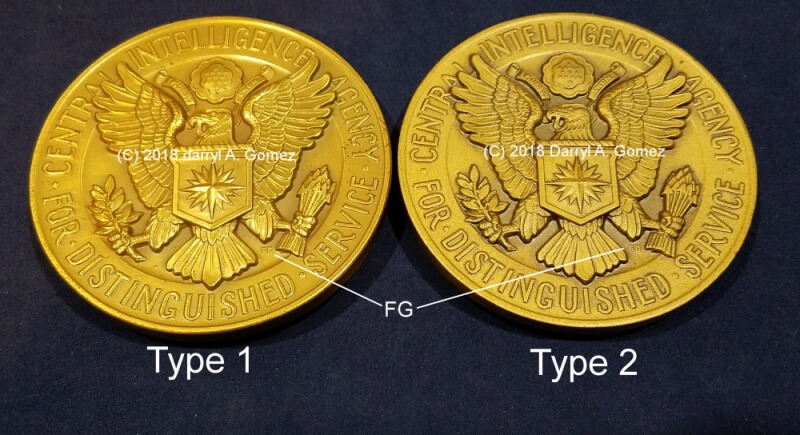 The Distinguished Intelligence Medal is awarded by the U.S. Central Intelligence Agency for performance of outstanding services or for achievement of a distinctly exceptional nature in a duty or responsibility. Both the services and achievement criteria could be classified in nature and may restrict the awardee in physically receiving the medal.

Not much is written about the original manufacturer of the CIA medals. However, this is a goal of my  ongoing research on the subject of "special medals for U.S. Government agencies" . The  original CIA medals are a product of the U.S. Mint®.

There are two types of original Distinguished Intelligence Medals. The most obvious difference is the antiquing of the medal's finish of the type 2 medals. The reverse of the type 2 medal shows a change with the the engraving pad where the type 1 text "AWARDED TO" was removed (the "1968" seen in the image was engraved post -manufacturing). An engraved  serial number at  the 12 o'clock position on the rim. The type 2 also has a few slight design changes on the reverse.

As note to collectors: When the "FG" hallmark is  seen on the reverse it's an original U.S. Mint medal! This is true for all original CIA medals (which shares the type 1 and type 2 reverse designs).

Agree w/Longstrider, I think the FG stands for Frank Gasparro. Initials near eagle's leg, like on the Kennedy half dollar.

Isn't the "FG" stand for Frank Gassparo? I am a bit confused. Do you see this as a problem or just a numismatic point of interest?

Can you do me a favor? This country is 21 trillion in debt. Can you get the cost of these medals and what material there made of? I would be grateful. Thank you .Mike.

Too bad there are not records. Using tax payer dollars to strike items at the U.S. Mint should be accounted for.

Hi! Why should there be public records that have nothing to do with the public? Let the government make them in an unknown mint so we will never know. What difference does it make. Our mint making medals for our government. Employee's of our government. How many are there millions or billions? Then I would be concerned. I'm sorry I still don't see any thing wrong here at all. If our mint can't make medals for our heroes who should?