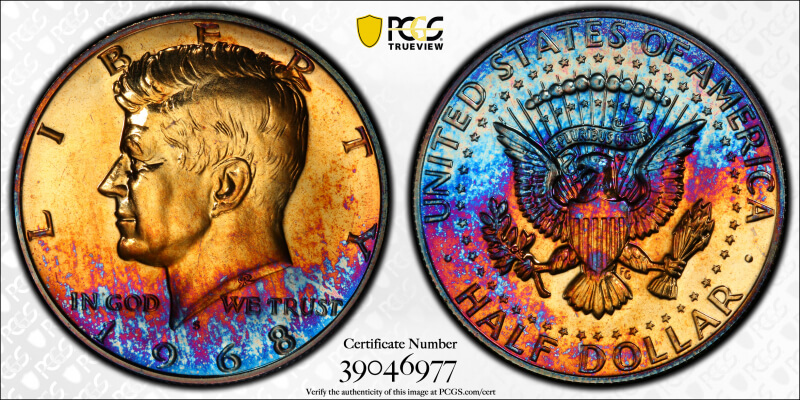 Hi, this is Eric and today I will be writing all about Kennedy half dollars.

The obverse was designed by Gilroy Roberts and the reverse designed by Frank Gasparro. On the obverse there is a design of President John F. Kennedy. On the reverse is an eagle with a shield holding an olive branch and a bundle of 13 arrows. The olive branch symbolizes peace and the arrows symbolize war. A ring of 50 stars to represent the states surrounds the design. The Kennedy half dollar was made to commemorate the death of John F. Kennedy after he was assassinated in 1963. Now letâ€™s talk about values and errors about Kennedy half dollars. Kennedy half dollars are usually wanted because some of the Kennedy halves contain silver. Iâ€™ve seen coin shop owners pay a good three or four dollar a piece for the Kennedy halves. And the ones in really good condition can be worth around ten dollars or so. But clad Kennedy halves can be worth a good amount of money in uncirculated condition. According to the red book it could take someone around three dollars each to get a clad Kennedy half in Mint state 63 condition. But the ones graded above MS 67 can be worth thousands of dollars! The same goes for silver Kennedy halves in MS 67 condition or better. Now letâ€™s get into the errors. Here are some of the more common errors: 1964 and 1964 D DDO (Double Die Obverse), 1968-S proof inverted mint mark, 1974 D DDO and the 1971 D and 1977 D struck on a forty percent silver planchet. The 1964 DDO can be worth from 20 dollars to thousands of dollars depending on condition. The 1968 inverted S is worth hundreds of dollars in a good Proof 65 condition. The 1974 D DDO in a good Mint State condition can be worth around twenty dollars or so. Iâ€™m so sorry but I couldnâ€™t find much information about the prices of the 1971 D and 1977 D silver errors. But, here is a cool fun fact about the Kennedy half: A coin representing Kennedy was conceived the very day of his assassination. Within hours of the assassination, Director of the Mint Eva Adams spoke with Chief Engraver Gilroy Roberts about depicting Kennedy on a coin. First Lady Jacqueline Kennedy selected the half dollar for the coin's denomination. Also I forgot but they also made a gold and silver anniversary half in 2014.

Anyways, I hope you guys learned something new and I think I will be writing another blog on the weekends so yeah. And I really need an idea for the blog.

And also make sure to check out my collection cause I posted something cool there. Bye

Also I could only upload one image cuz the other ones were to large.

Very nicely done! A simple clad Kennedy half dollar was one of my very first coins that I had right before I started collecting. I don't collect them as a series, though I do have them in my type set. Thanks for sharing!

Nicely done Erik. It's good to read a blog written and not copy/paste. I learned from you. Thanks.

My favorite subjet. Since the 1990's the mint has been making silver proof Kennedy's. So my book reads P,D,S,SP.. That's four coins a year. They come out of the sets. The 1964 all silver except a small amount of copper. By the way Eva Adams had nothing to do with the Kennedy. Roberts was doing medals of all the presidents. He was working by Kennedy's office. He would ask him what he thought . The President liked it. After Dallas they needed a coin immediately. Roberts had a finished portrait. They used that on the Obverse.. I have Kennedy's the SMS sets MS 67 all coins all years not worth thousands. Maybe the gold coin they made. But the first Lady did not approve of the first coins. Accented hair. So they stopped fixed it the way she liked it then continued making them. I had to add this I could add more but you did well. Thank you for your blog and your research. Frank Gasparro did the reverse!

Always a hit with collectors, and most likely for years to come.

I think the reverse design is one of the best of any U.S. coin

Learned something new. 1970 D half is my favorite. Bought 10 as a kid thinking they would go up in value. Didn't quite work out, but still like them.