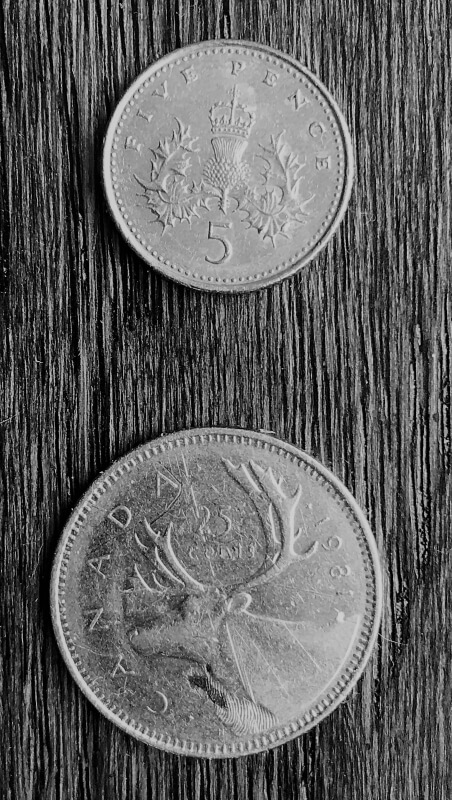 As of late the reject bin has yielded more than just some spare pocket change, though if I am to be honest I am on the lookout for a little more than jingle in the pocket.  What really brings a smile is a foreign coin or better yet something with silver in it.  The latter specimen being rarely seen, but imagine my surprise when in a handful of reject change I spy a Canadian quarter with the queens original portrait that does not appear to be nickel.  Upon turning it over in my hand to see the date it is confirmed being 1963 not only did I find something foreign, but something silver in of all things a reject bin in a HEB Coinstar in the Heart of Texas.  That was not the only unusual coin in that handful of change I also found a coin that traveled much further in distance if not in time from the United Arab Emirates.  It is a Dirham and I would suspect made its way here via a soldier though not knowing the date I could be wrong in my assumption, maybe someone reading this blog can help in the regard by clarifying the date.

Then possibly a week later I once again was able to scoop up a handful of change from the reject bin.  As before I recognized a piece from our neighbor to the north, but being a more current portrait of the queen I knew this time it was not silver.  Still I was happy with the find, but imagine my surprise when I examined my haul further at home.  Not only was there one but two dimes from Canada dated 2013 and 2018 though better yet there was a silver Roosevelt dime in the group of coins.  It was not just a common 1964 or 1964-D, not that I would not have been thrilled anyway, but a 1953 Denver coin I had found.  So with these two finds within a week of each other I much to my wifeâ€™s annoyance made sure to check every machine we happened to pass.

Seems word must have been getting around about this strange guy who kept checking the Coinstar bins because my glance usually yielded an empty bin which seemed to go on quite a while.  Well as in all things luck eventually turns your way and once again I found a bin full of rejected coinage.  No silver pieces to report but it did yield once again a Canadian coin, this one being a 1981 quarter.  The other coins was kind of odd with obverse showing a current portrait of the queen with the denomination being five pence with no country of origin inscribed upon it.  Upon breaking out my World Coin book back at home I was able to find the country of origin.   I guess Great Britain feels no need to identify itself, so this coin like the Dirham also took a long journey to arrive in a reject bin at the Coinstar at my local HEB.

This got me thinking are there Coinstars in the countries where these coins I found originated from and if so do people get equally excited when a state quarter shows up or a Jefferson nickel in the reject binâ€¦â€¦â€¦â€¦â€¦â€¦I wonder.

Man, a great haul for me is anything being in the bin. Great luck. Thanks.

Wow, fantastic haul, I especially like the silver Canadian quarter. Outstanding!!! Thanks for sharing.

Nice finds. Love hearing about what you are finding. Always liked Canadian coins. Used to live near the border, so we saw Canadian coins in change quite a bit.

Nice finds! Have fun with your coin hunting! ; )

Coinoscope is a free app that will tell you all about your UAE coin. Good luck! Let us know what it is....

Neat app, the coin UAE coin was dated 2007 so more than likely I would think it arrived here in Texas via the military. I noticed you could upload a picture to identify the coin, then I just scrolled thru until I found an exact match to the one I found. Thanks for the tip!

Very good hunting. You found a great bin. Good foryou. Canada made some beautiful coins . They say the fun is in the hunt. You should be feeling good now. Take care of them and enjoy them.. Congradulations!!