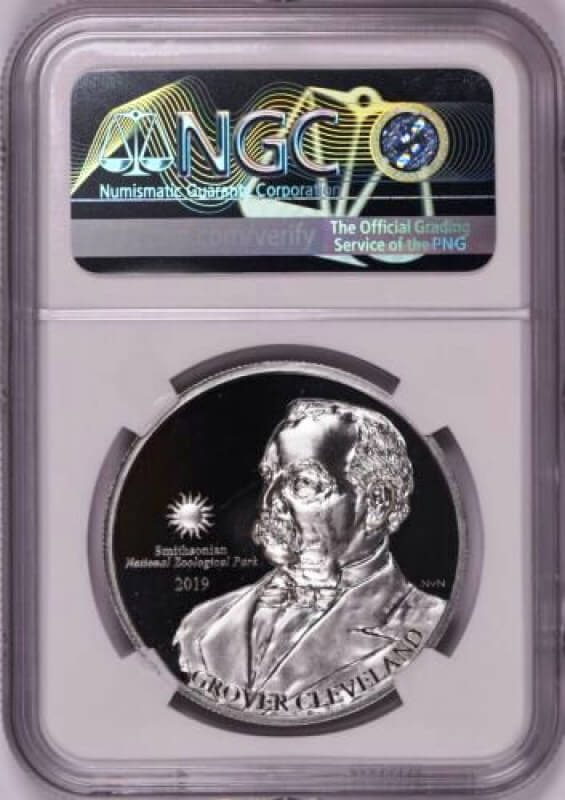 †† I wanted to share this new addition to my ‚ÄúBuffalo‚ÄĚ themed collection!† A perfect Silver 1 oz. Buffalo‚Ä¶ PF 70 Ultra Cameo. A National Zoo Commemorative 2019 Buffalo at the Castle.† Mintage of 2,500† Designed by Natanya van Niekerk.

† Did you know that when the National Zoo first opened in Washington, D.C. †132 years ago, visitors could only see a small herd of Buffalo in a pen behind the Smithsonian Castle and an American Golden Eagle.† The attraction became so popular that a bill was drafted and signed, by then President Grover Cleveland, and the National Zoo was born!

†To honor this great institution, the Smithsonian authorized the release of a series celebrating the founding of the National Zoo. The American Buffalo is the first in the series and is shown on a ruff mound and beneath a sky lit by the Smithsonian‚Äôs own ‚Äúsun emblem‚ÄĚ.† The reverse shows President Grover Cleveland with the same sun emblem and the date.

†† I thought this was such a beautiful coin!† To me the Buffalo is so rugged looking and the strike is amazingly detailed!

Thanks for reading my blog. Hope you enjoyed it†† ; )

That coin is amazing! It is interesting that the Smithsonian actually issued a coin.

Very cool addition to the Herd! Thanks for sharing.

Now that is an absolute beauty. Thanks for sharing Kepi!!!!!

Not long ago I stumbled upon the Smithsonian medal series discovering the two Saint Gaudens. Researching this series I somehow had yet seen this one listed. Thanks for the blog on one I'll be certain to add.

That is a beautiful Medal. I think because of this very interesting blog in will have to pick one up. !! The gold I can wait on. Thanks for telling us about this beautiful animal. To think we almost made them extinct. It will go nice with my buffalos.!! Thanks again!!

That is a stunning coin and a great post to go along with it Kepi ! Since my uncles lived in Oxon Hill, Md., I have been to the National Zoo a couple of times. I have also had the chance to view these majestic animals up close when stationed at Ft. Sill, OK. Thanks again for a great blog!

Beautiful coin. Have not seen it before. Might try to find one myself. Very nice.

That is a spectacular coin Kepi. I'm glad you are gonna let John have a buffalo if he finds it. Do you think he will name it Bill?

Beautiful coin and a great blog read. Thanks Kepi. Nothing, I think, says American Plaines more than the mighty Bison. I too love Bison. They make a delicious burger on the Independence Day grill. Farm raised of course. Thanks. P.S. My wife says if a baby bison is walking down our road, I can keep it. I would NEVER eat our bison.

Buffalos aren't only a popular attraction in zoos but also in numismatics! That's a nice medal you have there, Kepi!