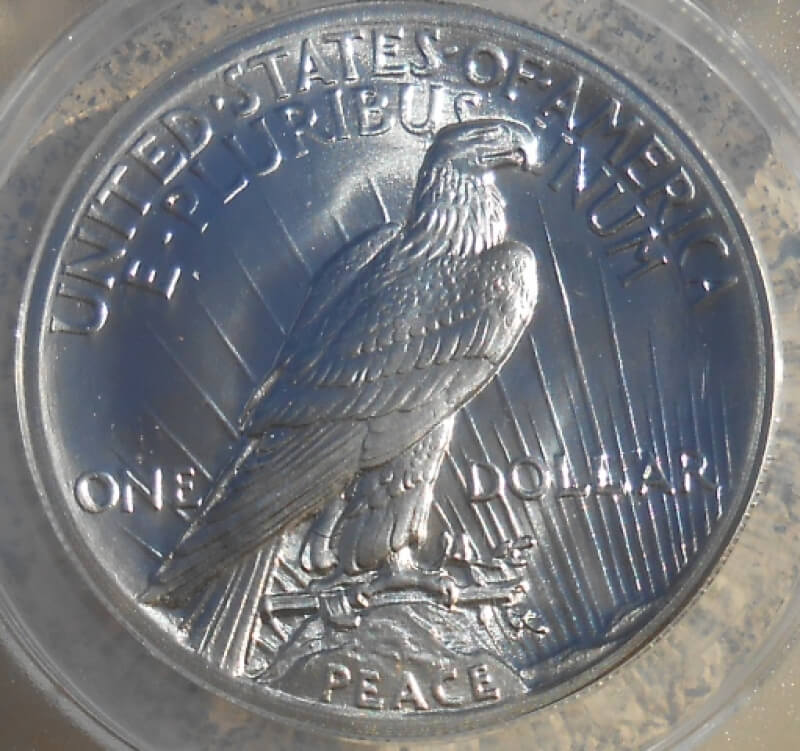 My next blog has been known to cause controversy in other venues, i.e. NGC blogs. Not only controversy but some people get downright angry. Letâ€™s see how it goes here. Below you will see my example of a Dan Carr Token. This particular specimen is a 1917 Peace Dollar with the original design from artist/sculptor Anthony De Francisci. It is in the original high relief as well as the â€śbroken swordâ€ť reverse. There are a couple of facts that I need to discuss now.

First off, as many of you know, the Peace Dollar was designed as a high relief coin. This only lasted part of the first year of strike, 1921. A couple of the main problems with the high relief strike was they would not stack on one another. This made it a problem for the banks. Also this design led to very short die life. The coin was to symbolize peace after our struggle in WWI. Many people, at the time felt the broken sword, to them, depicted defeat. At first the word PEACE was added as well as some other minor details. At least one bronze cast was made of both sides of this design.

Not being enough to satisfy the powers that be, and without De Francisciâ€™s knowledge, the broken sword was completely remove by George Morgan. He filled in the area and engraved some minor details to the hub. A master die and hub were made from his revisions. Since all these changes were making the release of the new coin running late a new run of 1921 Morgan Dollars were also released that year, 1921. The new Peace Dollar went on to be made form 1921-1935.

As time went on the first bronze cast of the first â€śbroken swordâ€ť 1921 design was lost. In 2016 Daniel Carr bought this casting from a â€śpickerâ€ť that discovered it at a garage sale. A 3D High Resolution scan was done and a digital reduction process was used to create the 1917 â€śfantasy-dateâ€ť overstrikes. This process led to the new tokens to have a high relief that is twice that of the original 1921 high relief Peace Dollar released by the US Mint.

You may be wondering how Mr. Carr and his company Moonlight Mint gets away with legally striking these pieces without the word COPY struck on them. The lawyers have maintained and the government agrees, so far, that the coins are over-struck on regular US Mint coins, resulting in impossible and/or fantasy dates or types. This particular coin was made between January 2017-2019 and struck original Peace Dollars. Simply put all these fantasy date coins were made using original Peace Dollars as the planchetes and stamped with dates and designs never made by the US Mint.

My coin is grade by ANACS and classified as an MS 69 TOKEN. The luster and deep, deep strike of this coin is exceptional. It is a true miracle to be able to own a â€śnewâ€ť example of a Peace Dollar in the artist/designers original idea. Thanks for reading this and please feel free to comment. Enjoy the photos. Believe me they donâ€™t come close to showing the beauty of this token/coin.

On the subject, not long ago those two late night "coin dealers" were pushing off 1985 American Silver Eagles (yes, calling them as such) with the original Walking Liberty obverse. They were encapsulated as over-strikes, yet not once had either stated that these were never U.S. Mint issued. Nor mentioning David Carr or Moonlight Mint. Carefully choosing their words for fifteen minutes or so, the unsuspecting and uneducated out there were left with the impression that they were real issues. Can't recall the price, but it wasn't cheap. Aside from situations like this, I actually like them and might someday add a few to my collection for what they are.

Hey longstrider thanks for telling me about the broken sword desing.

When you get a chance tell me why our mint can't make coins with so much luster and Carr can.

Adding items similar to what you collect, can make your collection more interesting to other when you relate the story that goes along with the items.

What ecactly is the broken sword desing

It was the original proposed design for the Peace Dollar. It was to celebrate the end of WWII. The designer originally drew the eagle holding a broken sword to celebrate peace. The public thought it looked like the USA was defeated as a broken sword historically can symbolize this too. You can view the broken sword in the photos above. Thanks.

Thanks for all the information. Mr. Carr has some interesting pieces, that's for sure. I don't have any myself, but you are getting me interested!

Carr's "coinage" is interesting, and sometimes even humorous. I don't have a problem with it but a novice could get burned buying one from a huckster or dishonest dealer. It's still buyer beware. I'm surprised ANACS certifies them. I don't know if NGC or PCGS does. I have a James Madison concept mini-dollar which i purchased raw, and never even considered slabbing it.

Here's an interesting question I think. How come this Mr. Carr can make a coin with that much luster and our mint can't. He does claim to have the same press as the mint. Maybe the mint could take a lesson.

Yes, other forums kind of loose there minds over these pieces. I myself find them attractive and they don't bother me at all. I guess I can see both sides.

Mr. Carr is definitely a lightning rod in the numismatic community. While I probably wouldn't buy a medal struck at Moonlight Mint, I don't have a problem with other people buying them because they know what they are getting. What I really find interesting is the meddling of George Morgan on the reverse design. I knew about the original sword design but I did not know about Morgan. Another point to make is that if I remember correctly the treasury dept in the 1960s put the kibosh on the planchets used for the Heraldic Art Medal series of so-called half dollars. It seems they were the same size and thickness as the US half-dollar. I do have a few of these in my collection and it might be nice to do a blog on them sometime.

Very interesting blog .I think you explained it very well. As far as Daniel Carr goes he's making money of some collectors and I'm sorry but if the mint has to put copy why is he above the mint. The set that was coming out and later defeated was to have copy on it. The Morgan and Peace dollar I believe. As I say and every one else we buy what we like. Good blog I picked something up today that you can find a casting from a picker.. I mean that's fate. Thanks again excellent explanation.

That is very nice Longstrider. I have the 1918, 1919, and 1965s from Mr. Carr. He has also very cheekily done a 1964 D version. But as you stated, he is able to get around the COPY provision because he does not recreate a coin that was ever minted and released and he overstrikes an actual Peace Dollar. Mr. Carr is not for everyone but I find his work first rate and worthy of my collector dollar. Others with objections should simply state their case and lobby their Congressmen if they want the Law, allowing this product, to be included under the Hobby Protection Act.