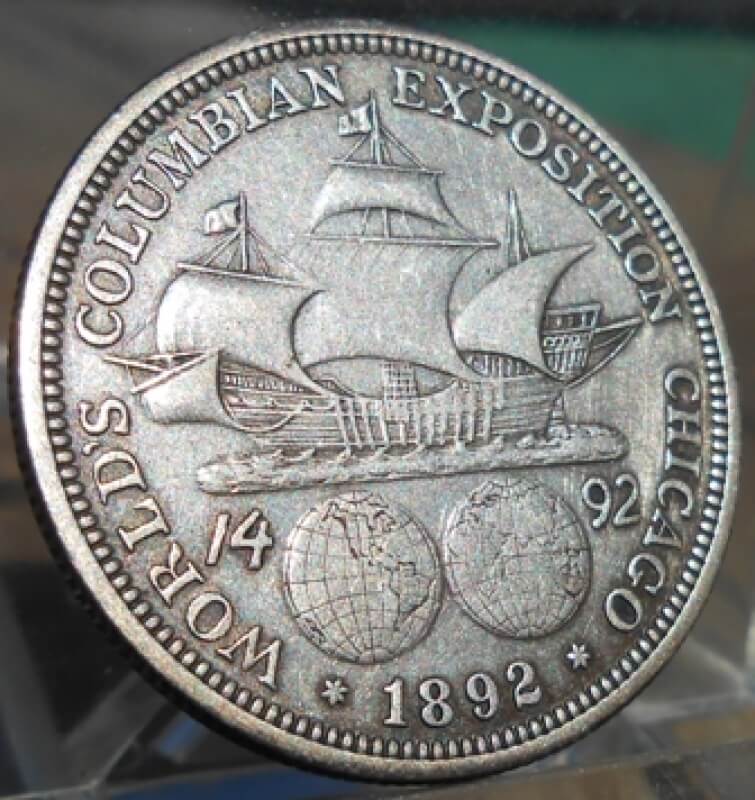 03 Oct 2017
My controversial coin is a 1892 silver Columbian Exposition Silver Half Dollar. It never used to be controversial but it seems to be now. I won't get into politics. This isn't the place. Let's just say that as a American-Italian I am not to happy that most Columbus Days festivals are now called Indigenous Peoples Day, as well as the parades. Back to the coin. This coin is the first commemorative coin issued by The United States of America. They were issued to commemorate the Worlds Columbian Exposition held in Chicago. This Expo was to celebrate 400 years since Columbus' finding of the New World. Coined in 1892 some were also made in 1893. They were sold at the Expo for $1.00 as a souvenir and to help cover the cost of the Expo. This coin has become the most common early commemorative coin. As you can see in the photos, mine has great toning on the obverse, that my photos don't show properly, and wear toning on the reverse. Most were held and not spent but it appears this one was spent. Why?? Maybe the original owner needed money so bad he/she spent a coin that cost one dollar to get fifty cents and it went on from there. The specs on this coin are that the obverse designer was Charles E. Barber. The reverse was designed by George T. Morgan. This is noteworthy as they were, reportedly, arch enemies at the mint. It has a diameter of 30.6 mm and weighs 12.5 grams of 90% silver and has a reeded edge. There was a total mintage of 950,000. I hope you enjoyed the blog and photos. I look forward to your "Non-Political" comments, please. Thanks for looking!
SOURCED:
The 2017 Redbook
www.njccoin.com/coin/explorer

just want to make a correction to your statement that you probably unintentionally made, it was the 400th anniversary not 100th. but back to the coin i got mine this past summer and i just love the design of the coin it is indeed a beautiful coin regardless of what political points of views you have on him or the day

Thanks for the help..

One of my favorite commemoratives. I have a circulated one myself. I believe it came from my grandmother. Thank you for the blog.

Beautiful Commemorative! So much history here...a lot I didn't know! Thanks for an interesting blog and great photo's!

Nice blog, it is food for thought.

The 1st of the classic commems. Yrs ago I found 1 in a bank roll. A good coin with a good story behind it. Further research is on my list of things to do. Ever see the proof coin?

That coin is in great shape. I also like it. I don't care what they say. It's still history. I won't get into politics as you requested. But history is history good or bad. This man wanted to prove the world was not flat. Looking for another route to the east. His crew wanted him dead. You have a great coin mine should look as well as yours I'm glad you posted it. I enjoyed it. Mike.