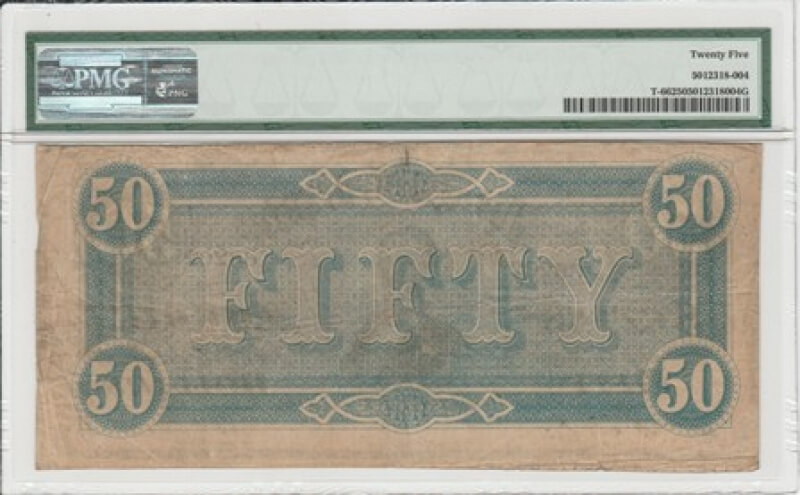 The note pictured below is a 1864 Confederate State of America Fifty Dollar bill. It is dated February 17th, 1864 and printed by Keatinge & Ball of Columbus, South Carolina. It was printed on high quality bank note paper. The total number of genuine notes issued was 1,671,444. I say genuine notes issued because even though the serial number of all the notes lawfully released were printed with a machine as a way to bamboozle counterfeiters, they were counterfeited in huge volumes in Havana, Cuba. The back of the T-66 was printed with a blue back and a red overprint the colors varied depending on how much ink was placed on the plate. The front has a range of color. It ranges a dusky dark pink to light red, dark red and a deep dark orange-red. The dark red commands the highest price. This type note is fairly common in all grades.

The front has a vignette of Jefferson Davis. The back shows the denomination. Across the top is written that this note was payable two years after the ratification of a Treaty of Peace between the Confederate States and United States. A plate letter of "WA" is stated. This and other "tells" make this T-66 note a Criswell variety number of 500 and a PF-11. These are all different ways of listing the different variety of the same type note. It has a Rarity of 4 making it very common with 5,001-10,000 known. I have found these notes to be a very enjoyable way to learn about this important part our history. It can be very complicated with many different issues to be included in researching a note. Just like the history of the Civil War. The smallest detail on or left off the note can change everything. Just like the real world then and today! Thanks for looking. Please feel free to comment.

What a nice addition to your set! Love the faded red color on the front. Thanks for all your research. It's really interesting! Great pics too. ; )

That's a beauty. Love the back. Nice & simple design.

Nice blog. Learn something new. thanks

The history on these is great. You taught me a few things today.

Looks like your going for the set. I think that is great. More collectors should at least give it a shot. This note has Jefferson Davis on it not to many people knew what he looked like. But now we know thanks to you. I enjoyed very much . Keep them coming. I enjoy them and I learn something. Thanks. Mike.