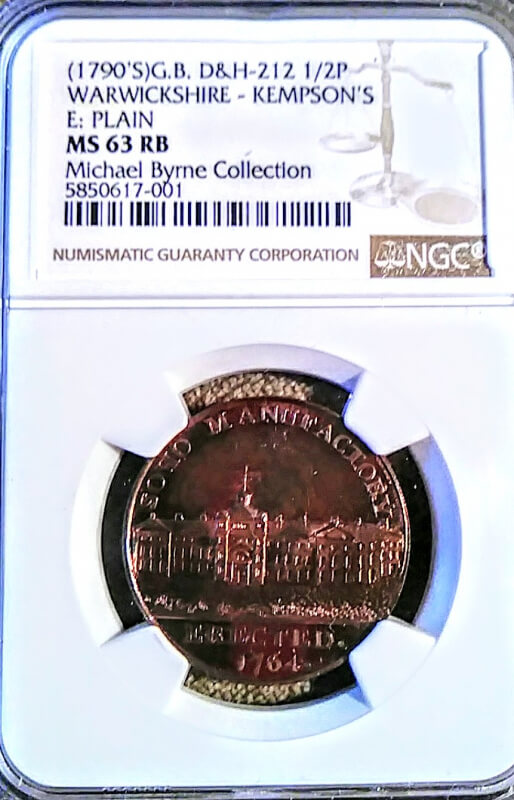 Hi my friends . Now hope I  you all are ok. This blog was written before but a new token and more information is always welcome. Matthew Bouldien was the general manufacturer in Birmingham. In 1762 he bought and rebuilt some works at a place called SoHo. Little did we know what would be coming . Its on the outside of the town. Now he didnt do this alone a gentleman by the name ofMr. Fothergill was his partner. Now he wasnt done they became aquainted with  Mr. James Watt. He was the man made.famouse by inventing the steam engine. He moved to Soho in 1769.
He knew a good thing when he saw it. He hooked up with the other partners. Now Boultin was not done in 1773 he had an Assay office to his bussiness. Everthing was getting bigger.. In 1788  he added a coin machines and a coin  mill was built. Now what we have is the Soho mint. Beautiful coins and wonderful tokens like the one below. I know NGC is busy but that token is a proof you cant get better. They made a mistake on another one. Back to the blog. Now these machines were putting out 60 to 80 coins per minute. And they were taking care of.

I now the made a few items for the Royal Mint. In 1857 there were no more coins tokens . It was dismantled and the machinery sold toMr. Ralph Heaton and the TheSons of Soho. . Now all good things come to an end the old mint was one.  There are no remains of the old mint. It produced some of the words best tokens and coins you have seen most of my collection. I still have raw tokens  that i like that way. But when you come accross a beautiful token whats the crime in trying to protect it. You hold this token up its remarkable. How they missed this i will tell you. NGC is using other graders in different sections. I will not send another coin or token till this virus ends and it will the other mistake. The token said erected in 1794 they used that as the date. It wasnt. It was made sometimes in the 1700's.  I will send it back . Then again i like  to learn the history is a lesson the reserch all teaches. I hope you enjoyed this one the next one will say proof. The obverse is a view of the Soho Works . Legand, is Soho Manuufactury. Erected in 1764. The reverse is Kempson crest and Birmingham. Thanks i hope you enjoyed it Mike

Beautiful Token Mike! And as always a great history lesson ; ) Thanks for all time and effort in researching for your blogs!

Thanks for the history Mike. Nice as always. That token is definitely a PL. Great that NGC is keeping up their standards..

Beautiful Conder Mike, and to get your name on the label means you have some pull. Thanks for sharing your beautiful token and the story behind it. Reading your blogs is like walking back in time.

You are correct, it appears to be a proof or at least should have been noted as being proof-like. I'd call in the ump for a replay.

What a great addition to your collection. Beautiful token.

Awesome Token. I believe I am now a token and medal collector. Have started a nice medal collection and so called dollar collection. It is posts like this that have given me the interest. Just love looking at old medals and tokens. You have a great collection. thanks