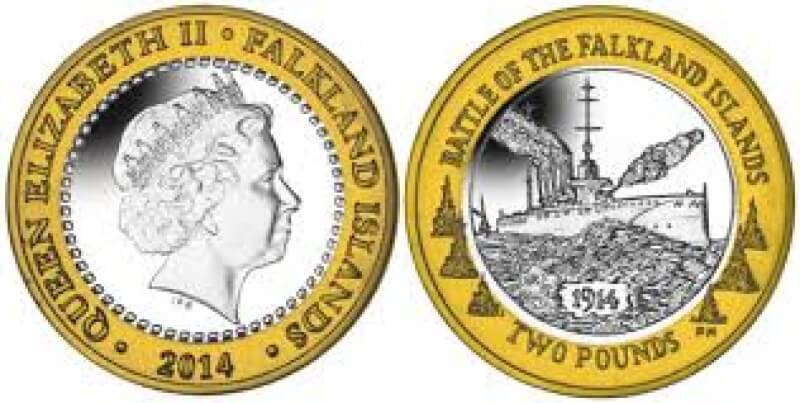 Today, I will be giving a history lesson pertaining to a coin such as the article I did on the Great Fire of London. Today's coin is a 2014 bi-metal coin issued by the Pobjoy Mint on behalf of the Falkland Islands to commemorate the 1914 battle in the 1st World War. This battle is titled the Battle of the Falkland Islands which took place in the Atlantic Ocean which is where the Islands (I thought it was in the Pacific for the longest time) are located.

The coin features a fast light cruiser called the HMS Glascow , a very important ship in the battle, with bomb explosions in the water surrounding the ship and the date of the battle, 1914, underneath. Since minted for the Islands by the Pobjoy Mint, the obverse has Lizzie the 2 (hehe).

More into the history, the Germans previously won a battle off Chile's coast against the British and were confident with their win. Admiral Graf Maximilian von Spee decided to take his ships to Port Stanley in the Falkland Islands to raid the British coaling depot and radio station there. However, he  did not know that 8 British ships ( Britiships?) including the new, modern warships the Invincible and Inflexible were at a nearby port where Spee wen to refuel and made a massive mistake of assuming the ships were of the Japanese Navy. The ships were equipped with much better guns that were significantly more powerful than Spee's and were commanded by Vice Admiral Sturdee.

Missing a golden moment to shell the unsuspecting British fleet, Spee fled from the ships as men were weary from the previously mentioned win plus, the British had better guns the outcome was inevitable if he stayed. Although he had a head start, the modern ships were too fast and caught up quickly and caused Spee to engage with the enemy, as it was the only option left.

At the end of the battle,  four German ships were sunk / sinking including Spee's flagship, and none of the British ships had any major damage. Human casualties accounted to 10 Brits dead and 2,200 Germans shot or drowned. A lone German ship, the light cruiser Dresden, was the only one to escape and basically roamed around for three months until the captain surrendered close to the Juan Fernandez Islands, very rougly 1,800 miles in a straight line, which would take them over South America so probably more like 2,500 miles distance to the Islands. The captain evacuated and scuttled the ship by blowing up the main ammunition magazine.

As a result of the battle, German commerce raiding on the high seas was terminated.  Just as important, Sturdee's success was taken as a tremendous morale booster and victory by the British, entirely reversing the earlier setback at Coronel.

I hope you enjoyed todays and blog and I think I will take a little break from blogs as school is back in session for me and the 12th is the last day to submit for YN bucks before the ANA YN Auction.

Excellent article. A coin made from that kind of enduring history will always be considered a treasure.

Very interesting article. Alot of history what book so I can read more on it. It got my interest so I would like to follow up on it. Especially since the latest war they had with Britain. That was interesting. Especially when the British commander said we have the island surrounded no arms or food will be coming in. I guess he forgot about the thousands of sheep they raise there! Thanks.

Well, I clearly need to brush up on my world history. I forgot, if I ever knew, all about this incident. I love learning new tings or relearning them. Thanks!!

Interesting article. The only battle of the Falkland islands I can recall was the one that happened in the early 1980's. The islands declared independence from England which resulted in the English navy" knocking" at their door.