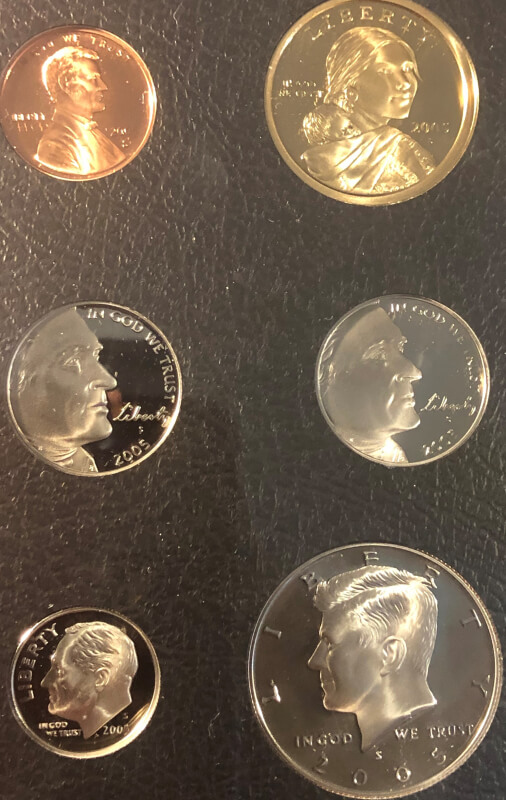 † † †This is part 3 of a 4 part series of American Legacy Sets. The 2005 American Legacy set was the first one issued. It features the Chief Justice John Marshall silver dollar and the 2005 Marine Corps silver dollar. Both of these coins are known as "modern commemoratives" and both are very attractively designed coins.

† † †On the left hand side of the display is the Chief Justice John Marshall silver dollar. It was issued to commemorate his 250th year birthday.† He was the fourth Chief Justice of the United States and was born and raised in Virginia.†The silver dollar features a portrait of Chief Justice John Marshall on the obverse. This was designed by John Mercanti, based on an 1808 painting by Charles-Balthazar-Julien Fevret de Saint-Memin. The inscriptions include ‚ÄúChief Justice United States Supreme Court 1801-1835‚ÄĚ, ‚ÄúJohn Marshall‚ÄĚ, ‚ÄúLiberty‚ÄĚ, ‚ÄúIn God We Trust‚ÄĚ, and the date of issue ‚Äú2005‚ÄĚ.†The reverse of the coin depicts the old Supreme Court Chamber within the Capitol with inscriptions ‚ÄúE Pluribus Unum‚ÄĚ, ‚ÄúOne Dollar‚ÄĚ, and ‚ÄúUnited States of America‚ÄĚ. The reverse was designed by Donna Weaver. It's weight is 26.73 grams, and it's made of 90 percent silver and 10 percent copper, it's diameter is 38.1 mm and it's final mintage is 196,753.

† † †On the right hand side of the display is the 2005 Marine Corps silver dollar. This coin was issued to commemorate the 230th anniversary of the Marine Corps.††The obverse features the famous scene of Marines raising an American Flag over Iwo Jima that was photographed by Joe Rosenthanl. The inscriptions include ‚ÄúLiberty‚ÄĚ, ‚ÄúIn God We Trust‚ÄĚ, ‚ÄúMarines‚ÄĚ, and the anniversary dates ‚Äú1775‚ÄĚ and ‚Äú2005‚ÄĚ. The obverse was modeled by Norman E. Nemeth based on the photograph.†The reverse features the emblem of the Marine Corps, featuring an eagle, globe, and anchor. The inscriptions include ‚ÄúUnited States of America‚ÄĚ, ‚ÄúE Pluribus Unum‚ÄĚ, the Marine Corps† motto ‚ÄúSemper Fidelis‚ÄĚ (Always Faithful), and the denomination ‚ÄúOne Dollar‚ÄĚ. The reverse was modeled by Charles Vickers.†The 2005 American Legacy Collection included all of the proof coins from 2005 and proof versions of the two commemorative silver dollars issued for the year. This set was priced at $135 and limited to 100,000 units.† This coin weighs 26.73 grams, is made of 90 percent silver and 10 percent copper, with a diameter of 38.1 mm and the final mintage is 548,810.

† † †Commemorative coins that†achieved a sell out included the 2005 Marine Corps Silver Dollar, which depicted the famous flag raising at Iwo Jima, the 2006 Benjamin Franklin Silver Dollar, which featured two different designs, and the 2009 Abraham Lincoln Silver Dollar, issued for the bicentennial of the 16th President‚Äôs birth. The mintage for the 2005 American Legacy Set is 46,057.

† † †As always, enjoy the pictures, stay safe, HEALTHY, and coronavirus free. Just a quick side note, I received my first coronavirus vaccine (Moderna) this past Sat. after my local VA called and informed me that they had an "extra dose".† I go for my second dose on Mar. 6, 2021. Talk to everyone again soon when the final 2008 American Legacy Set is received. I'm still in the process of reviewing the 3rd release of the "Loupe", wish me luck...† :-)

The Iwo Jima scene is one of my favorites! Makes me want to buy one. My parents actually got the vaccine too, because I am chronically ill. Thanks for the info!

Great collection! Thanks for sharing these beauties! ; )

I see these sets on the coin vault. On line and T.V. It's on the zeal channels here. They go for about $85.00 but allot of coins. Just put coin vault in and it comes up!! I bought some coins there. They have low medium and high prices . Give it a look see!!

Charlie, you are accumulating a very nice collection of modern US commemoratives, thanks for sharing.

Thanks for the kind words and encouragement folks!

Fantastic blog Charlie. I feel bad as I still don't have the Marine coin. I live next to the biggest Marine base in the world. Nice read. I enjoyed it and learned. Thanks.

Very nice coin! Thanks for sharing it and telling us about it!

Those are some sweet coins, good blog old friend, later!

Great coins. There nice to look at. The Marine coin is one of my favorites. . That's a greatvcoin. Marshall also. Thanks for The Research and the history. I enjoyed it very much!!

Nice coins. Enjoyed seeing them. Nice work. Glad to hear covid shots are getting done. Thanks

Dear slybluenote, Thank you for the opportunity to see some beautiful coins. John Marshall is especially interesting to me because I went to John Marshall Law School in Chicago. He was truly an historic figure. Good job. Stay Safe, Mr. B