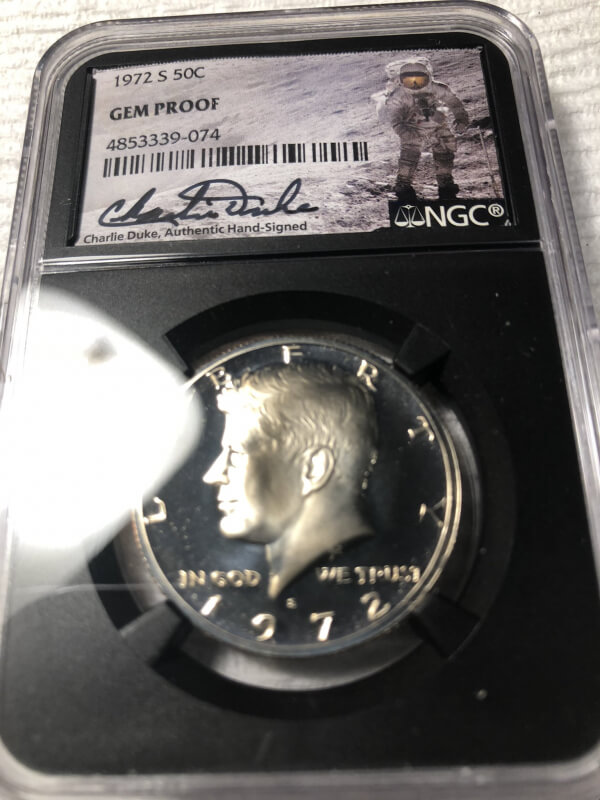 I hate to admit it, but I didn't learn until recently the importance of  Charlie Duke and how he was related to thenumismatic world. So in case anyone else out there is like me, I'll touch briefly about the significance of this astronautand his contribution to numismatics. Charlie Duke was part of the Apollo 16 mission and was the 10th man to walk onthe moon back in 1972. He was also the youngest person to step foot on the moon and still holds that record today. WhenI learned that he had a connection to Kennedy Half dollars,  which I collect, I knew then that I would eventually own one.     When I was growing up, I had heard the name Neil Armstrong, and knew he was the first person to walk on the moon. Ialso knew of the quotes that he made famous. I think the reason I knew Armstrong but didn't remember Duke was the yearin which they performed their feats that they were known for. In 1969 I was still in school and actively learning. In 1972, I wasthinking about things that would soon impact my life. My whole vocabulary would be changing. In April while Charlie waswalking on the moon, I had just received a letter from my Uncle, Sam that is. I was preoccupied with what my draft numberwould be in April 1972. The only Charlie I was concerned with was North Vietnamese soldiers. Saigon, DaNang, tripwires, and booby-traps had become my new vocabulary.     In closing, I have 2 observations. Who says you can't teach an old dog new tricks? And two, pay closer attention to what'shappening in the world around you. In these days and times I often recollect the famous motto of the Non-Commissioned Officers Corps. which was painted on the side of a building at Ft. Sill, Oklahoma, "Mission First, People Always"! Sage wordsof wisdom. I want to thank LongStrider for pointing me toward the Modern Coin Mart where I purchased the piece of historythat I now own below! They do have some pretty good deals. Until next time my friends, stay SAFE and healthy!  Charlie akaslybluenote

Thanks Skybluenote, for the shout out. Just trying to help a brother. No big deal. Anyhow I also was not sure who he was after your blog. Did a quick searched and learned a ton. Those were messed up times watching our draft "lottery" weren't they? I pray no one else has to live that. My number was 181, so no paid trips to see the world-Vietnam. Thanks. P.S. you got a very nice example.

Thank you for caring enough to peruse my blog ! At the expense of sounding "ignorant", could you tell me what "VAM" is and what the letters stand for. I read your blog on the 1922 and know enough to realize that it's a "Variety " with errors on it, but that's the extent of my knowledge about VAM's ! Thanks in advance. Btw, the best I can remember, is my number was something like 58. After going to the local Court House I threw my letter away. Looking back, I should have kept it for a keepsake. :-))

I remember Apollo 11 very well but all the remaining Apollo missions I've forgotten. Thank you for bringing Charlie Duke back to the forefront. I will have to read about his mission and his partners up there.

Thanks for the indormation on this American Hero. There are so many we tend to overlook some. I also picked up something. Every coin tels a story.

Thanks for the blog. I learned something today.

Those were awesome days of watching the moon landings. I also forgot about Duke being one of 10 to walk on the moon. Nice Kennedy Half. I don't have any signed coins yet. Thanks for the post.