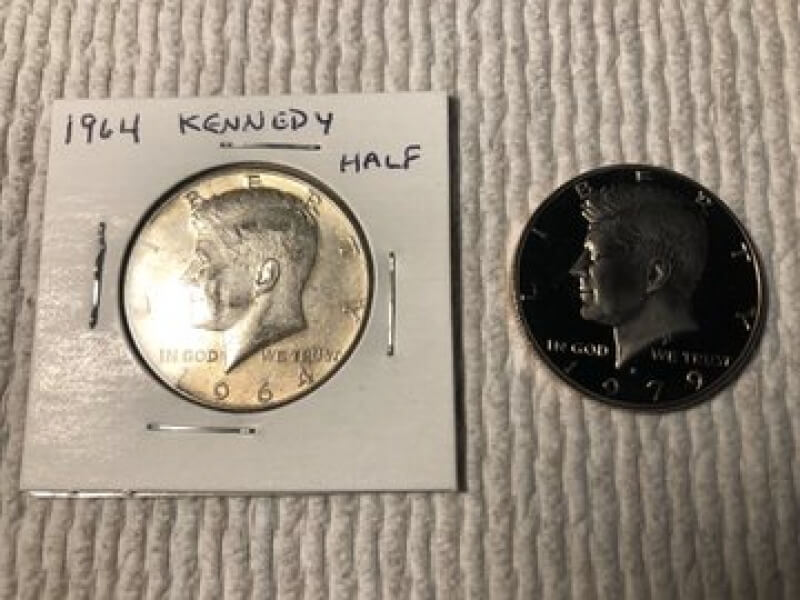 Hello again folks!  I've just completed grading my granny's last 1964 Kennedy half dollar, along with a 1979-S, type 2, Clear, Kennedy halfthat was graded Choice Proof, MS-63 by Profile Coins and Collectibles. I added these 2 coins to my collection yesterday but have been takingmy time during the grading process. I graded the 1964 VF-30 for several different reasons. It's a circulated raw coin and as such it has it's problems. There are a few scratches and it has some  carbon spots. It's also starting to tone a little. It has retained at least 3/4 of it's luster though which is the reason for the grade that I gave it. I wrestled with this decision for over a week. One of the main hurdles is that I'm emotionally attached to it. It's not the same as a coin that I would purchase from a store, like the 1979-S that I will address next. I'm considering upgrading my library soon. I used the Internet, the ANA Grading Standards 7th Edition, and Franklin & Kennedy Half Dollars 3rd Edition by Rick Tomaska as references for this project. Looking at these 2 coins side-by-side, the difference is quite obvious. Now, speaking to the 1979-S, is why I concurred with the grade that Profile Coins & Collectibles assigned to it. This is where I learned A LOT! Rick Tomaska is knowledgeable when it comes to Franklins & Kennedys. He appears to be biased in his coverage to Franklins though. He also doesn't cover raw/circulated Kennedys in depth the way that he does proofs, SMS, minting and cameos. My thinking is that it all boils down to a "West coast" thing  :-) ! Now when I hear 1979-S, the first thing I think about is it a Type 1 or Type 2? I've learned that the type 2 is more scarce, costs more, and has a low mintage. According to Mr. Tomaska, striations are common around the nose area in proof Kennedy halfs. I found this to be true during my examination of the 1979-S. This was only noticeable under a magnifying glass and good lighting which are important during grading. This is another reason I went with the MS-63 grade. I found myself visiting and re-visiting Mr. Tomaska's book when looking at this coin. This is clearly a case of "buy the book before you buy the coin"! It also didn't hurt that I had a few other 1979-S Kennedys to look at also. One thing is for sure; the 1979 portion of my collection expanded due to my research of the San Francisco mint! So far, the only error I've found in Mr. Tomaska's book is on page 138. The book says "On the obverse, the value HALF DOLLAR, Gasparro's initials, and UNITED STATES OF AMERICA are the only elements besides the seal".  I know I'm still a "rookie",  but I think I read somewhere that the obverse was the "HEADS" part of the coin! The part he's describing is the REVERSE of the Kennedy Half Dollar. Just sayin' !  :-)     Until next time folks, mind your social distancing, wear your mask, stay SAFE and coronavirus free!  Charlie aka slybluenote

Grading is so subjective and especially so hard from photos and not in person. Thanks for a great blog and keep it up.

Yes, I agree user7180. Thanks for kind words. Charlie aka slybluenote

Good blog. I love Kennedys, and it is awesome that you have such a cool history, and memories, with the 1964. Very detailed grading, and I will have to check that Rick Tomaska book out, I don't own that one. :) That 1979-S has some gorgeous luster! Good luck with you collection! :)

Thanks Zanzibar ! When I first started collecting Kennedy Halfs someone suggested I purchase that book. It's fairly cheap and you can get it at Whitman's website. Thanks again for your comments! Charlie aka slybluenote

Very interesting to read your reasoning for the grades you assign. I can see why it is hard to but a grade to Grandma's coin. But it really doesn't matter. It's her memory that the coin brings back regardless. Thanks Sly B.

Yes, I agree John. Another reason I graded it so low was "eye appeal". I read somewhere that it was important in grading. I was just pointing out that it's harder to grade your own coins than if you were grading someone else's coins. You're right about the memory though! Thanks for the comments buddy!

Thanks for all the kind words folks ! It means a lot to me to know that I'm making progress! Thanks again! Charlie aka slybluenote

Nice Job Charlie, you are certainly consulting the right book when you read what Tomaska has written. Our own Mike B is a friend of his and has been working with Mr. Tomaska for several years

Good post. Liked hearing about grading. Would love to work for a grading service. To see and grade all those coins must be interesting but also stressful. Thanks for the educational post. Take care

Well you found a Kennedy lover right here. I have the dansco collection two books . All four coins every year. elling.per year. I do not own the gold all MS they came from out of sets . Then i have the slabed ones.the accented hair. The DD obverse of his whole.face. . I like to sit in my chair and see the luster coming of each coin. Page after page. I wish they would.grade books. That would be great. , Thanks for the blog and your coins.Espi ally Grand mas!!