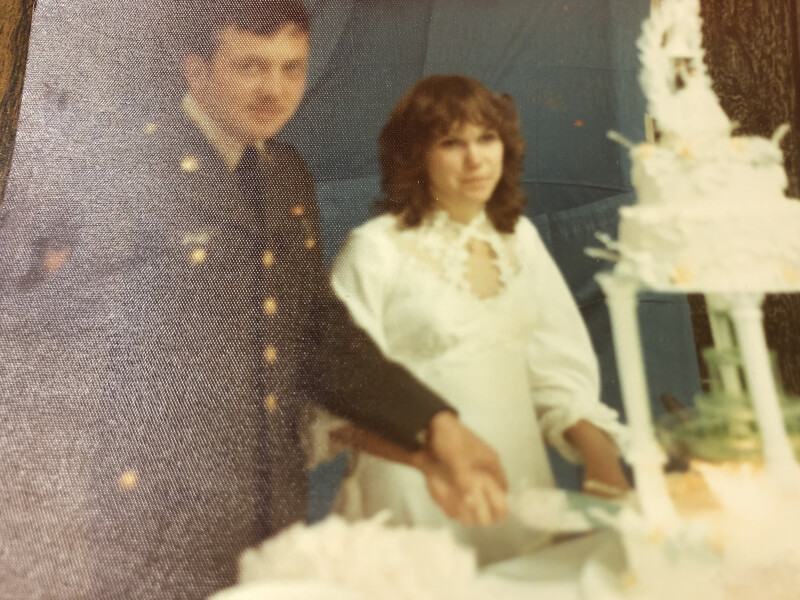 Today is a special day for me as some of you are well aware. 41 years ago I married my best friend! I did start another collection today of quarters, so it's my second collection on this website. The pictures here and in the collection are just some of my favorites. Last year I enlisted in the U.S. Mint Silver Proof Program. In my case silver is more affordable than gold.  I'm not overly knowledgeable about quarters but I'm still on the learning curve. Today I learned that 147 million Americans collected the State Quarters and that number represents at least one person from every household collected these quarters. My step dad married my mom when I was about 10 years old. Although he never "officially" adopted me, I still called him Dad. He was quite a drinker so our family was what is now called dysfunctional. Being prior military, he commanded respect. I wasn't a big fan of his discipline tactics, but I did respect him. When the state quarter program began, he went to a local bank and obtained a map and started collecting the different states quarters when they were distributed. He didn't live long enough to complete his map, so I did it for him. I wouldn't meet my birth father until much later in my life. That's a WHOLE different story which will eventually be revealed in another blog.

I received an email a few days ago from the U.S. Mint advising me that my silver proof set was on it's way. It's running $63 and some change, but to me it's worth it, I think. Last year they gave me a free 2019-W reverse proof penny which is really nice looking. This year it's going to be a 2020-W reverse proof nickel. It should be arriving any day now. I'll blog about it when I receive it just for Longstrider's benefit  :-))  Maybe I should start a "Junk money" collection ! When I found out that my step dad was collecting the state quarters I figured he would need a better way to display them so I went and bought a new "official looking" map. I spent $30 for the map, certificate of authenticity, and booklet telling the story behind each quarter. According to my research, there were 6 million free lesson plans related to the program that were downloaded from the US Mint by teachers, parents and students. My own vocabulary was also expanded to include the word "seigniorage" ! To explain this word, the US Mint made $6.1 billion from this program !

I've never attempted to grade a quarter but since I've got a few, I may attempt it in the near future. I got my new 2021 Red Book in the mail yesterday but I'm going to need more information that what I currently have to subjectively grade them. I've got a few in my Junk money that I could look at, but it's a problem when you haven't been able to actually look at and examine MORE than a few graded specimens! Collecting coins is a lot like marriage! One has to determine if you're in love or lust! That's the best sage wisdom I can provide to young numismatists ! Until next time my friends stay SAFE, healthy, and Coronavirus free!  Roger and out ! Charlie aka slybluenote

I got a map just like that for my son! He plugged it for a while and lost interest. I'm the only one in my family even remotely interested in coins and I'm way on the other side of the pendulum. When I show my wife some of my coins she usually replies, "That's nice." Anyway, I digress, congratulations on 41 years of marriage. My wife and I will be celebrating 38 years of wedded bliss this year!

I hear you Gary ! My daughter and wife are NOWHERE near interested in coins except when they go shopping! :-)) You're about to catch up with me on anniversaries ! Thanks for the post. Charlie

Happy anniversary! I love the quarters sets, I collect with my mom. We are assembling four sets, one for her, one for me, one for my little sister, and one for my little brother. :) For Christmas a while back, my dad surprised her with silver quarters from the states set, P, S, and D, (so not the whole set, since the special boxes contained many coins, but many mintmarks of each lol.), and she and I hope to collect the rest of the silver quarters in each mintmark, at least for her. I love how collecting brings families together. :) Thanks for the post!

That's GREAT that you do it as a family ! I love that concept. Good luck in your endeavors and collecting, also thanks for the nice comments. Take care, stay SAFE and Coronavirus free! Charlie

Happy anniversary. My wife and I just celebrated on 34th.. Great start to your quarter collection. You have a great family. Well done..

Thanks John, and congrats to you too! Thanks for the post. Charlie

Congratulations on 41 years. How time flies by! Silver coins, medals and sets are the only products that are affordable to most collectors and still maintain their value down the road.

Good going! It is always nice to start something new. That is what makes the hobby great.

Yes, I agree Sun ! I'm 50% complete with my Kennedy Half Dollars and thought I would speak about another denomination! Thanks for commenting! Charlie

Can never go wrong with silver. Fortunately for you, quite a few of them are available at issue price or in some cases less. The only set I'm missing is the 2012 silver proof. That was the year I started my motorcycle shop so coin collecting was put on hold for a few years. I only wish the year had been 2010, those sets are much cheaper on the secondary. Another fine blog!

That's for sure LongBeard ! I also am shopping for the 2012 Silver Proofs also. My only problem is, like I said before, I'm not willing to give up my first born :-)) ! I talked to Mokestr about floating a loan from the sale of his Fiat and he indicated he only had a nice set of Roosevelts ! HaHa ! Thanks for the comment bro! Charlie

Happy Anniversary!! 41 years ! My brother I believe married in 79. My 2021 red books are on the way. Thanks for the post and updates. Always like.

That's a coincidence Golfer ! Yeah, I got the hardcover edition this time. I think I like the spiral bound one better! Thanks for the kind words. Charlie

Nice choice my friend. My son got the original quarters for each stae the one that came with the map. Thats what he wanted. Then he saw the America the beautiful quarters. I told him yes ten years and many coins. P,S,D, and the silver. He said i want the just the silver quarters proof ultra cameo MS 69. He has one coin to go. He didnt want the clad. I went on NGC site they price them at 35.00 each. Good for him. You always have interesting blogs i enjoy them. I like the family with the coins. We collect what we like. Go for it.

WOW MikeB ! Those must be some nice looking coins! Good for your son! Take care my friend thanks for the kind words! Charlie

Fantastic Charlie, you are well on your way to becoming an obsessed collector like the rest of us. I love the silver proofs also and its cool they are all 100% silver now. Cannot wait for your next blog.

LOL Malcolm ! Should I take "becoming an obsessed collector" a good thang or a bad thang? HaHa Thank you for following my blogs. I'm only 50% done with my Kennedys but decided to take a break. I do have more to slab and add, but I do think the break will do me good :-)) Take care my friend and keep those Roosevelts handy :-)) ! Stay SAFE and healthy my friend! Charlie