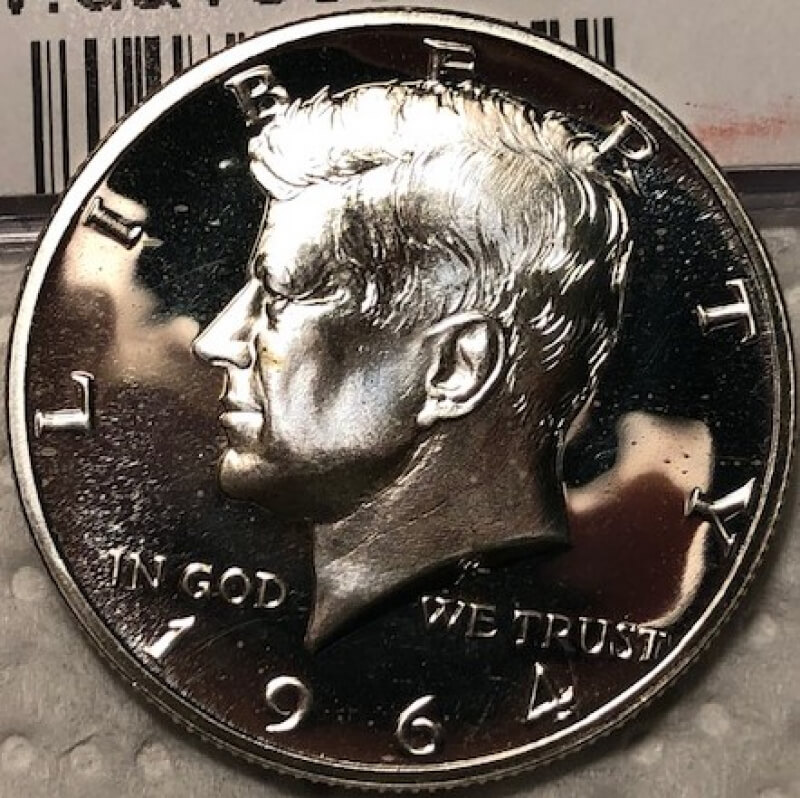 I'm very excited to make this post. About a week ago I received a circular via email that was advertising "proof coins". Since I had done business there in the past, I decided to check it out to see what they were offering. When I first started collecting Kennedy Half dollars, I went for the key dates first which were the 1998-S Matte finish and the 1970-D. I was eager to obtain the complete set, business strikes and date/mint mark coins first. Needless to say, I was taken aback when I discovered that business strikes only covered Philadelphia and Denver minted coins. I did not let this deter me though, because in my mind, a "complete set" included all coins from all years from all mints. Anyway, when I first looked at this circular, the first coin I saw was the 1964 accented hair variety,  gem proof, Kennedy Half dollar.  I have several 1964 Kennedy Half dollars, but not one of these varieties in my collection. I knew they existed, but I wasn't going to buy one due to 2 reasons: Number 1, I didn't need it to complete my set, and number 2, it cost more than an average Kennedy.

One of the publications I used to assemble my collection "My Coin Guides" states the following "One of the most notable varieties of the series is the 1964 â€śAccented Hairâ€ť Kennedy Half Dollar. The variety only exists for the proof version of the coin. Many collectors seeking a complete set of proof coins will include this variety in their collection. In the first year of issue for the Kennedy Half Dollar, the design was modified shortly after production began. It has been rumored that the modification came at the request of Jacqueline Kennedy who disliked the details of the hair above her husbandâ€™s ear. An alternate theory suggest that the modifications were done to facilitate production. Whatever the case, the heavy incuse lines in Kennedyâ€™s hair were removed, creating a low mintage variety." The article goes on to state "It has been estimated that 1% to 3% of the total mintage of proof 1964 Kennedy Half Dollars are of the accented hair variety. This would suggest a total population ranging from about 40,000 to 120,000 coins." As noted above, this coin is gem proof and is a very nice looking coin although it does have a couple of spots on it, and I did get it at a discounted price, so it's something I can live with. It's a coin that I would consider sending off to have graded!

Just to give you a little more history of this coin, Gilroy Roberts and Frank Gasparro are the designers of the coin. Per the My Coin Guides article "Gilroy Roberts later recollected that Mint Director Adams had called him within hours of the assassination. He was at the Mint at the time, working, and talked to Adams about possible denominations that were considered, these being the Quarter Dollar, Half Dollar and Silver Dollar. The Silver Dollar had not been produced since the 1930â€™s, and while there were discussions going on about reviving the largest silver denomination, the plans were not viable enough to consider placing Kennedy on that particular denomination. Jackie Kennedy, who had ridden in the Presidential Motorcade sitting right next to the husband, opposed replacing the Washington design of the quarter, and thus the half dollar denomination was chosen."

I've just finished adding this coin to my collection on the "collections page" of this website, and while doing so got the feeling that I was visiting an "old friend".  If you're interested in learning more about Kennedy Half dollars, I would certainly recommend this website:

As always, enjoy the pictures, stay safe, HEALTHY, and coronavirus free! Get your vaccination when possible to protect you and your loved ones! P.S. I included a pic of my jewelers tray just to let ya know I'm staying busy and there will be more posts coming soon!

Youve got yourself a BEAUTIFUL coin there!! Thanks for sharing!

Nice pickup, I also occasionally use your guy, never been disappointed with a purchase. Keep on keeping on!

I enjoyed the notes about the Kennedy Half Dollar. Before I became a "real" coin collector, I had been saving all of the Kennedy Half Dollars in commerce. That started in the 70's, so, obviously, I didn't have many of the Kennedy Half Dollars that were in great shape. Since then, I have been collecting the Kennedy Half Dollars that I could get that were in really nice condition. I doubt if many of them were Mint State quality. Then I discovered the Mint and I started buying them from the Mint. I never bought a "single" Kennedy. Almost all of them came in a set. Then the Mint offered them in 2014 (I think). Anyhow, I bought the Anniversary Set in 2015 and they are beautiful. I also like to get them in the Silver Proof Set and the Limited Silver Proof Sets and any other offering from the Mint. I don't send them off to get graded because I don't need their validation that they are great coins. Anyway, with the prices going sky high, I may just be satisfied with what I have. Again, I appreciate the comments that have been made.

Great pick-up. It's nice to add a new addition.

That is a beauty! Mine, which I sold, was an NGC PF68 with hideous milk spots. I bought it sight unseen through a mail order in the late eighties , can't recall who, but several years later turned a nice profit. . Perhaps it's time for a replacement?

Nice coin. I'm not sure what a TPG, say NGC, would say on a Milk Spot coin. I would call and ask. It would be a shame if they gave it a "details" grade over that. I like dealing with your guy. he is very fair. I started using him from an older blog from you. I told him to give you a referral deal. haha! Thanks looking good.

Got my vaccine scheduled for this coming Friday. Thanks for sharing your outstanding Kennedy. Keep us posted!!!

Very nice. Show us again once you get graded. Thanks

Well that's a great find. I don't know if you send coins in to be graded but if you do this should go. An accented hair in a high graded proof coin is worth sending it in. I have one. And it will pay for itself plus. Congratulations on a sharp eye. And nice pick up!! I see a silver cloth please don't use it. Leaves hairline on the coin. Brings the value down!!