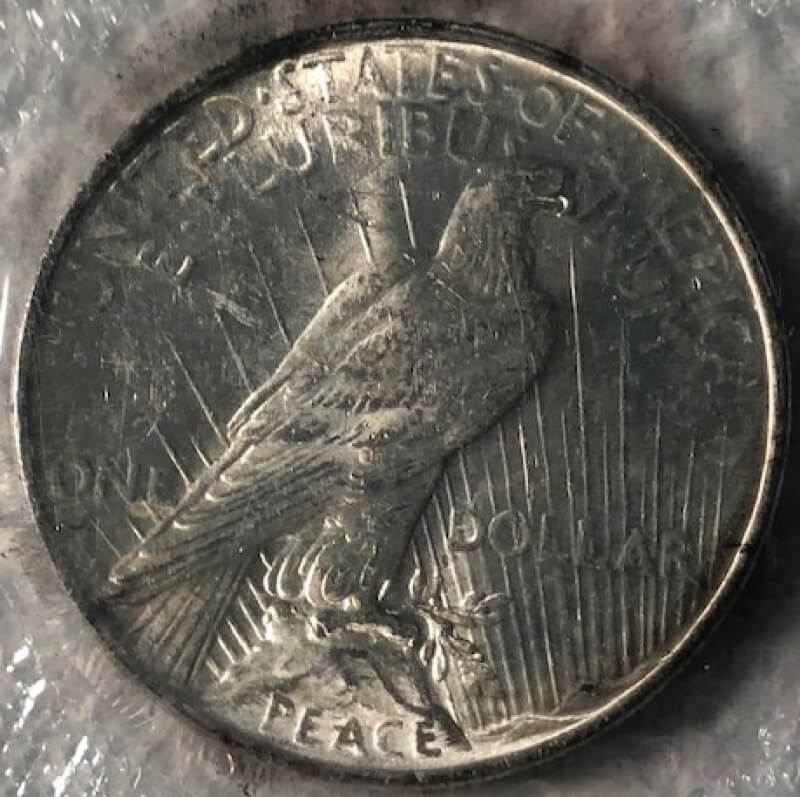 Ā Ā ĀAs promised in my last post, I would like to talk about Peace dollar hoards today. This post should have been last April for the "Big,Ā Bold, Coin Week"! Oh well, it's the story of my life, a day late and a dollar short. I'm not sure if everyone is aware or not, but I don't usually purchase coins/money from ebay. At first, I was only going to talk about the Binion hoard today, but yesterday, the second coin that I have ever purchased from ebay arrived. It was a 1923 "GSA" hoard Peace dollar. I have one more to acquire which is the Redfield hoard Peace dollar. It's no wonder that both of these specimens are from the year 1923. As "My Coin Guide" states "Although the overall mintage was not the highest at 30,800,000 pieces, substantial quantities of the coins survived undisturbed for years in mint bags, providing an ample supply for future generations." The specs for these coins are they are both from Philadelphia, are 90% silver, 10% copper, weighĀ26.73 grams, and the diameter isĀ38.1 mm.

Ā Ā ĀI really enjoyed doing the research on the Binion hoard because of the history of the coin. Not only does Ted Binion play a role, but NGC does as well. On 15 Jan., 2002 they posted an article on their website about these coins; "https://www.ngccoin.com/news/article/37/Ted-Binions-Silver-Dollars/". To obtain an even more complete picture of the history/pedigree of this coin I read another article from CoinWeek. You can find this article atĀhttps://coinweek.com/coins/certified-coins-news/pedigrees-hoards-the-binion-hoard/ . The article by Rick Bretz sums up the story behind this coin by stating "TheĀBinion HoardĀoffers the collector a variety of ways to collect coins, currency and memorabilia like ashtrays, dice, gambling equipment, photos, casino chips,Āetc. A collector could assemble a traditional date/mintmark set, or he could choose to assemble a set of the various souvenir items available. But first, who wasĀTed Binion, and what is the Binion Hoard? In case you missed theĀCourt TVĀdocumentary about him and didnŌĆÖt read any of the several books written about him or his father, here it is in a nutshell:".Ā

Ā Ā ĀAlthough the GSA hoard story doesn't have the allure or mystery behind it, it's a story that needs to be told as well. For the information about this hoard, I relied on the "Guide Book of Peace Dollars" by Roger Burdette. After spending 27 years in the employ of the U.S. government, I can honestly say one thing: if there's ANY way something can be messed up, the government is more than qualified ! "By March 26, 1964, the Treasury's inventory was down to approximately three million coins, most of which had been struck at the Carson City Mint during the 1880's. To prevent inequitable distribution of these pieces to speculators, Treasury secretary C. Douglas Dillion suspended redemption of silver dollars for paper currency and later transferred the coins to the GSA for public sale."Ā

Ā Ā ĀAs I reflect on our great nation's birthday this weekend, I'll be looking forward to completing "the trifecta" of obtaining a Redfield hoard Peace dollar. It is my hope that each and everyone of you who read this will have a safe, HEALTHY, and fun filled 4th of July ! As always, enjoy the pictures and we'll be posting again in a few weeks.

I own a Redfield 1885-CC Morgan but not in a Paramount holder. I know what I bought when I bought it shortly after the hoard sold for $7,000,000. Unfortunately, I lost the papers associated with it and can't prove it. Otherwise, I am fascinated by all hoards regardless of their origin. They all tell a story. I had the coin subsequently graded by PCGS at MS-64. Everyone have a safe and happy Fourth of July!

Really great blog! Love your photos! I am lucky enough the have a "Binion" Peace Dollar in my collection. Have a great 4th Charlie ; )

Sounds like you're going to complete your trifecta soon, I do have a Binion Peace Dollar but do not have the others. You many have inspired me. Happy Fourth to All!!!

Great blog Charlie on my favorite coin. I have a couple of Binion's. I even was able to talk to a woman that was "there" when they opened his vaults. Amazing. You found a fun way to collect them. I need a GSA soft pack. Thanks.

As a coin, the dollar never really circulated as the mintage numbers suggest. As long as a federal note exists along side the coin, people gravitate towards the convenience of paper as opposed to the cumbersome coin. As a result, two things occurred between the Morgan/ Peace and Eisenhower. One, a large percentage sat in bank vaults for many years. Two, the casino industry was the largest consumer beginning in the 1940's, coincidentally almost all of the hoards originate from the western half of the U.S.. Great blog, as always.

Great blog. I always wanted to find a hoard. Ask me in will tell you there are more. It's only a matter of time till they show up. Great history on both. I would.only like to know were the peace dollar board was found. That's it . Everything else is great. A good read for all. Thank you very much I appreciate a good blog!!

As LongBeard indicated, the Binion hoard was located in Nevada since Ted Binion owned the infamous Horseshoe casino. The GSA hoard was located at the Dept. of Treasury since it was the "govt. hoard". As I said in the post, this article from CoinWeek has the complete "Binion" story: https://coinweek.com/coins/certified-coins-news/pedigrees-hoards-the-binion-hoard/