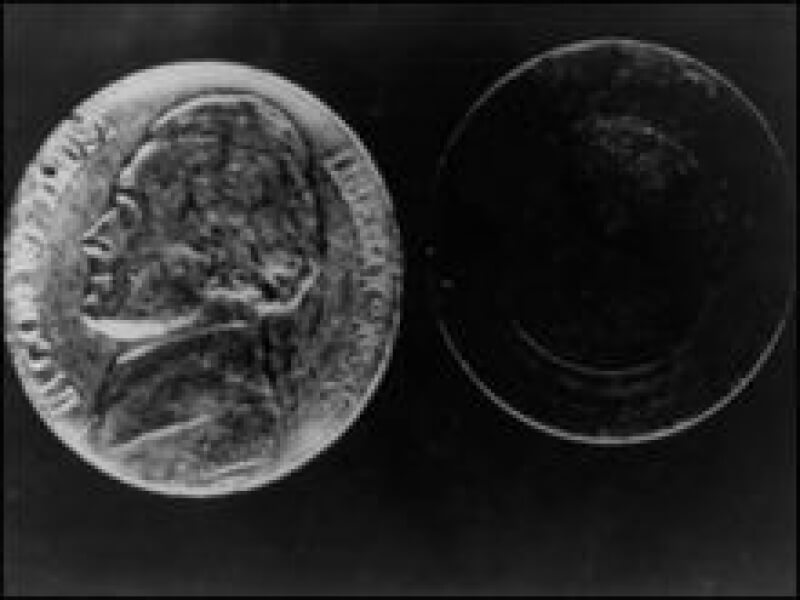 Jimmy Bozart was a young man who decided to make some money by working for the Brooklyn Eagle newspaper as a delivery boy.  One day, as he was making his way around his route, he accidentally dropped the last payment he received, which was a nickel.  Much to his surprise, the coin actually split down the middle of the edge.  One side had a normal 1948 obverse, but the reverse had a large S mint mark proudly sitting above Monticello.  Any of you would surely be able to tell that that simply could not be.  upon closer examination, Jimmy could see that still inside one half of this coin sat some microfilm.  Jimmy took it to the police, who turned the case over to the FBI.  They finally cracked the code on the microfilm, which incriminated the Soviet spy it originated from, Rudolf Abel.  He would later explain that he accidentally spent the coin, and couldn't track it down.  Later, Jimmy would ask  to buy the nickel back, but was refused, seeing as how it was now evidence.

Remember: If you see a hollowed-out nickel filled with a microfilm cryptographic message, say something. Just don't count on getting it back.

Then there was the man who made a business out of gold plating a V-nickel to make it appear as a $5 coin.

As it so happened, the nickel was close in size to the $5 gold piece, which had a similar design. So, as the story goes, a man named Josh Tatum began gold-plating the nickels and passing them off as $5 gold coins, for instance buying a 5-cent cigar then placing the coin on the counter and getting $4.95 in change.  The date 1883 was the first year of the Liberty nickel and since the population was new to this coin, it was easy to get away with the scam. Surprisingly, the perpetrators were found innocent since they used a deaf mute who would buy the 5 cent cigar.  Since the perpetrator couldn't speak he never said it was a $5 gold piece and therefore was innocent of fraud. (19th century logic, those were the days, am I right?). Later that year the word "Cents'' was added under the "V" to form the V-nickel we all know and love.

Hope you enjoyed, and, as always, please tell me any stories I missed in the comments.

Very good. I enjoyed them especially the kid Jimmy Bozart. He picked up his pay from Abel who lives in Foster Ave in Brooklyn. Two movies were made. The F.B.I. And a Stephan Spielberg movie when we exchanged Abel for our spy plane Pilot shot down. Can't member the name of it sorry. That nickel is in the F.B.I. Musuem. Thanks.

WOW...I have never heard these stories! Are they true? Just asking for friends, ME!....LOL Interesting reading for sure. Thanks for posting !

These are all true. Hard to believe!

That was fun NM, there are a million stories in the world of numismatics. How about the young boys in the late 60's who made their own 1944 Steel Cents by taking ordinary 1944 cents and heating them in Mercurochrome on their Mattel Thingmaker. Luckily for the coin market and the health of these young numismatist, Mercurochrome is no longer available. (: PS-The manufactured cents were not very convincing.

Proof that even Spy's read the newspaper back in the day. Nice Story.

I would have loved to see Jimmy's face when that nickel broke open. Not just Soviet spies used those kinds of coins. I've seen some questionable people put hollow coins with questionable microfilms into circulation. The racketeer nickel is a classic, I think that story will go on forever. Thanks!

I remember these stories from the past

Regarding the gold plated nickel and the deaf man, it was just a case of BLIND justice LOL! That's a cool story about the espionage nickel too