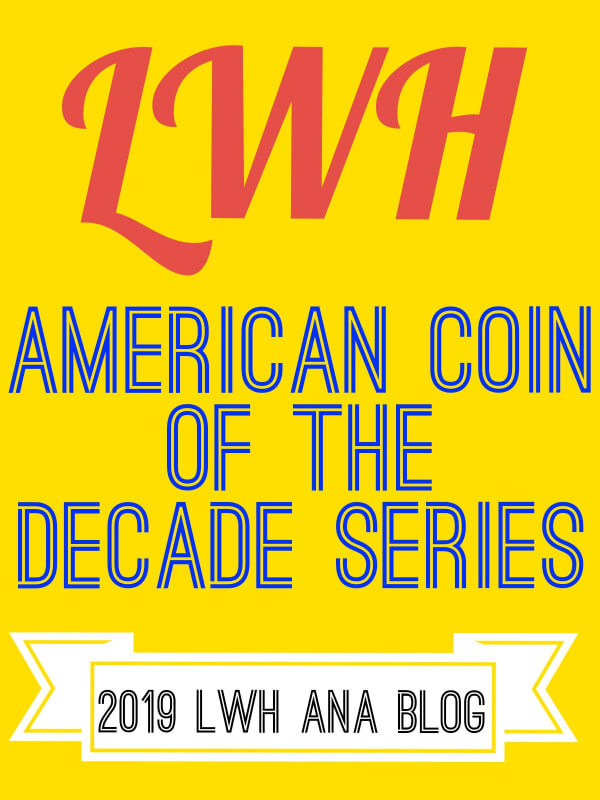 This is part seven of an eleven-part blog series.

Another artistic Weinman work, though personally I prefer his "Liberty walking" design, the "Winged Liberty" dime, another name for the "Mercury" dime, though less common, is an attractive piece. With exception for a few dates and errors, the "Mercury" dime is a great series for both the new and tight-budgeted collector. A wing-capped Liberty adorns the obverse, while banded sticks, to which attached is a blade, like an axe or tomahawk, around all of which is a leafy branch(I am unsure what type, though probably olive) cover the reverse. A fun series to collect, and an admirable design, hand the "Mercury" dime this award.

The "Peace" dollar, designed by Anthony de Francisci, has a stunning design. Originally minted in high relief, issues with minting lead to a lower relief version being created. It was produced in the same year as the final year of the Morgan dollar. If ef-au designs are acceptable, "Peace" can be had at a fairly affordable price, at least the majority. Sporting a spiked-crown, Liberty, with waving wisps of hair, is depicted on the obverse. Taking up the reverse is a detailistic perched eagle, clasping arrows while sun rays shine upon it. A pleasingly designed coin, the "Peace" dollar reigns champion of this decade.

From another popular series to collect, the "Three-legged" variety is probably the most sought after of the series, though a larger check is required(a three and a half legged variety for the previous year at Denver exists, and is more expensive, but in general the 1937-D three-legged is more prominent). The "Buffalo" nickel depicts a serious-seeming Native American ‘Indian’ on the obverse, with a bison, supposedly modeled by "the ‘Black Diamond’ in the New York Central Park Zoo"(2013 Redbook), standing on the reverse. Also known as the "Indian head nickels", these "Buffalo" nickels are the fine work of James Earle Fraser. A popular variety of a well-designed coin, this "Buffalo" nickel error wins the "Three-legged" race, and this award.

Ever since I first watched a documentary on this coin, I have been enamored with the story of the 1933 double-eagle. Not even supposed to exist, examples were leaked out of the mint’s safes away from the merciless melting pot. Numerous 1933’s were tracked down, but one traveled around the world, requiring the Secret Service to eventually recover. At one point in the King Farouk collection, that particular double-eagle was the only 1933 to be sold at auction. Granted, there are others out there, as was evidenced in that one case where a family had around ten, but still that element of mystery, espionage, and ‘cool’ remain, at least for me. Even if it was horrendously designed(which it isn’t, as I covered earlier when the "High/Ultra high relief won), the 1933 double-eagle would still win champion. (Please note, the St.-Gaudens double-eagle is allowed to win champion twice due to the fact that in both cases, it was a specific year or design variety that won).

Mercury dimes are a great coin that’s legacy will remain.