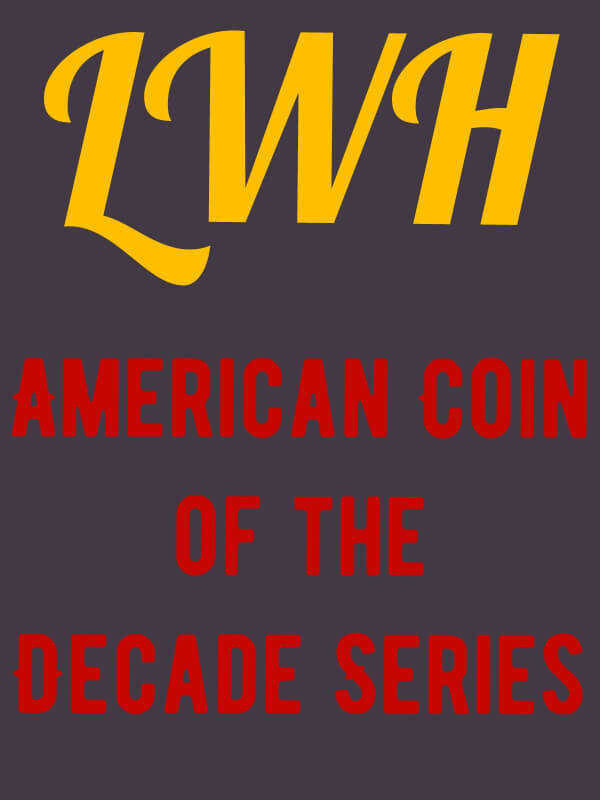 This is part ten of an eleven-part blog series

Long running design, starting in 1946, and still being used to this day, the Roosevelt has become in modern times the coin that multiple feel should at least have a little change. Regardless, thirty/forty years ago, the tiring of seeing the same design was not at the level it is now. The obverse depicts Franklin D. Roosevelt, while on the reverse a flaming torch is flanked by an olive branch on one side, with an oak branch on the other. The majority of 80’s Roosevelt dimes can be found in rolls and pocket-change fairly easily, though a few varieties may necessitate purchase for a small price, such as the 1982 "Without mintmark". A pleasant design for the time, the Roosevelt dime deserves this award.

An extremely unpopular coin with the public, the Susan B. Anthony Dollar was minted in only four years, 1979, 1980, 1981, and 1999. The obverse features women rights activist, Susan B. Anthony. While the reverse the same reverse as the Eisenhower dollar did, a eagle, which appears to be perched, is on the moon, with thirteen stars and planet earth in the distant background. For the most part examples can be found in circulation and rolls, even the 1979-P "Wide rim", though others, such as the 1981-S "Proof, type two" may require paying small prices, particularly low considering the overall drop in Susan B. Anthony dollar prices.(2013 redbook price, 1979-P "Wide-rim" = $60, 2018 redbook price= $39, that is just one example). The first regular circulating American coin to depict an actual woman(as opposed to the allegorical Liberty), the Susan B. Anthony dollar reigns champion of this decade.

Designed by Felix Schlag, The original Jefferson design was on it’s last full decade before some design modification. Featuring our third president facing left on the obverse, the reverse depicts Jefferson’s home, the Monticello. A few various varieties and dates are more expensive, but otherwise it is possible to assemble the majority of Jefferson nickels from circulation and rolls. Extensively sought out are Jefferson nickels in which the Monticello has five full steps. A pleasing design, and great coin for new numismatists, the Jefferson nickel takes home this award.

The first year of a program that would lead to numerous new collectors, and put the quarter right up against the penny for top first series to collect, along with rivaling it in early-collecting nostalgi, the first year of the State quarter program, 1999, was a big one. Besides starting a new trend with the reverse of quarters, as evidenced by the subsequent "America the Beautiful" series, it also created a trend of commemorating multiple things on a regular, rotating, annual basis, such as the presidential series with the dollar, or the "Native American" series also with the dollar. The obverse was modified to have "Quarter Dollar" where the date used to be, and "E Pluribus Unum" was placed above the mintmark. The five states honored in 1999 were, Delaware, Pennsylvania, Georgia, Connecticut, and New Jersey. A successful start to a program that brought in more numismatists, and started several trends, the 1999 State quarters win champion for this decade.

I'm enjoying your series alot! Fun blogs for sure ; ) Usually I agree with you, but not with the Susan B. Anthony for a Champion. Honestly I think the design is horrible, she looks like a man. Looking forward to your next one! ; )

Even though we may not always agree, I am glad you are enjoying the series

Thank you very much for this series. Keep um coming!

Glad you are enjoying it

Very nice. This is the first part I have seen. I will need to track down the first 9.

If you click my username/avatar, then when at my profile, scroll down to my blogs. Click on see more, which should make it easier to find the previous nine parts, as opposed to hunting through all the ANA member blogs

Are you kidding? The SBA dollar? We had to sell most of them to Ecuador, at a deal, to get rid if them. They love dollar coins there. I appreciate your enthusiasm for this and like your blogs but I have to disagree with this winner. I'll buy a Roosevelt dime with full torch and you buy any SBA you like. Let's see who does better in a couple of years, money wise. Don't really buy one, we will pretend. haha! The quarters are a good choice. Thanks for this series. Remember I am a Peace Dollar VAM guy , so what do I know... Thanks

This is not based off solely monetary and market values. Thinking that way would be narrow minded, as numismatics at its full is more than just filling your pockets with cash, but your mind with knowledge and your heart with joy. Granted, if this were just for investment purposes, I would never go with the SBA, unless as a high risk gamble type deal. But that is not the purpose, aim, or point of this. I'm sorry if to this time that hasn't been clear.

I'm a Jefferson Nickel fan and all those before it.!!

It's great that there are so many different coins for us to enjoy and choose from. Have you seen one of Schlag's proposed reverses? It had Monticello at an angle view. Looked cool. I think it would be a nice limited edition reverse someday

Good choices for both, I am guessing WTH quarters of Union Shield Lincoln for Part11.

Yeah, I can't get edit to work either

Wow, edit does not work on my response, I meant America the Beautiful quarters OR the Union Shield Lincoln Cent.

Thanks. check back next week to see whether you've guessed right!

Great choices. Thanks for the series. Looking forward to the part 11 finale!

thanks, hope you enjoy the final segment, and the blogs scheduled to follow it in future weeks