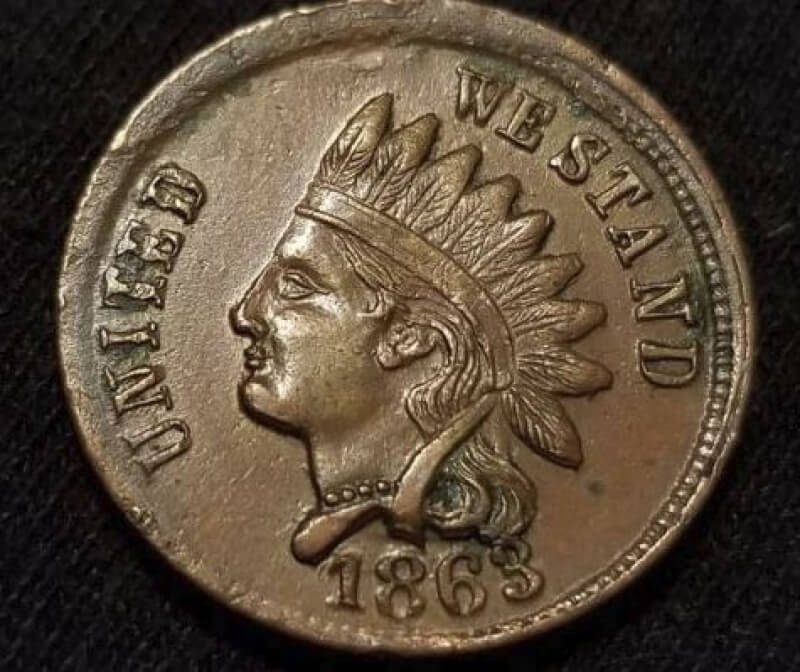 02 Aug 2018
DIE CLASH
A die clash is when a planchet fails to be placed between the two dies during the minting process, causing the dies to strikes together.  The design of one or both dies may appear in the opposite die, causing a "shadow" of the design to appear on subsequent coins/tokens minted with the damaged die.
This Store Card Civil War Token (CWT) has a great example of a die clash.  Looking at the obverse (on Store Card CWT's, the obverse is the advertising side of the token), you can see the "shadow" of the Indian Head.
This Store Card CWT is listed as NY-630-L-6a in the U.S. Civil War Store Cards book (3rd edition) by George and Melvin Fuld. The Broas Pie Baker of New  York is one of the more common Store Card CWT's. This token was purchased for less than  $25 which I feel is an average price for an example of a "common" CWT in this condition.

Thanks "SUN"! This is a really beautiful example of a CWT. Nice die clash too! Thanks for sharing it with us.

That is one of the best example of a clash I've seen. Beautiful coin and fantastic photos. Thanks. I think you bought that one cheap!! Well done.

Cool coin! I am really bad with errors like die clashes, but I am trying to learn more! ~Matt

Very interesting, I have always liked die clashes, sort of a two for one coin design deal. Great find.

I have the same exact token in AU 58 condition. Bought it at a coin club auction for around $25. It's the only civil war token I own. No die clash but what I believe to be a die cud.

Actually, turns out there is a minor die clash on it. Never would have realized it until I read this article. realized it a second after I posted that first comment.

That was interesting, and that's 1 historical token. CWT are a fascinating series.

Great blog good point and you have a remarkable picture of it. You can clearly see the shadow on the reverse. Thanks for the information how this occurs without the pictures we would have to try and imagine it. Thanks for your work and bringing this variety up.

Some die clashes do escape the mint. But like any mint error, the mint tries for good quality control.