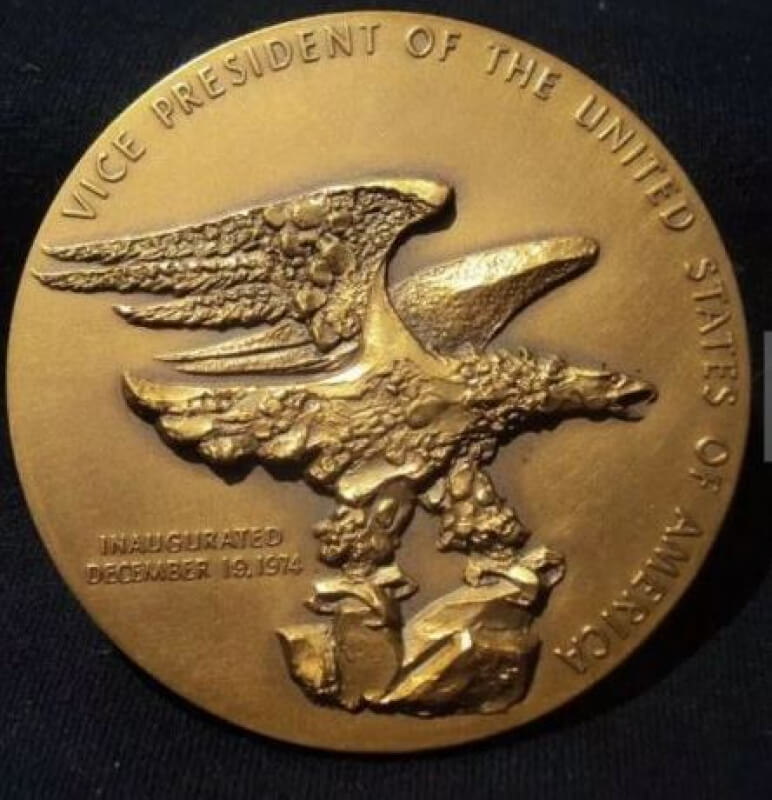 This medal marks the first inauguration of a Vice-President of the United States under the procedures of the 25th Amendment to the U. S. Constitution.  The amendment was adopted in 1967 to assure an immediate successor "in case of the removal of the President from office or death or resignation."  It provides that whenever there is a vacancy in the Office of the of Vice- President,  the President shall nominate a Vice-President who shall take office upon conformation by a majority vote of both Houses of Congress.  With the sudden resignation of Vice-President Spiro T. Agnew, a vacancy occurred on October 10, 1973.  Gerald R. Ford took the oath of office of Vice-President on December 6, 1973.

Gerald R. Ford was inaugurated the 38th President of the United States on August 9, 1974, after the resignation of President Nixon. Just eight months before Ford had became Vice-President.  For the first time, an American citizen became President of the United States without a formal election by the people at large.  Mico Kaufman , who prepared the Vice Presidential Medal, was commissioned to design the obverse, while Frank Elissu was commissioned  to design the reverse.  The Eliscu  design was inspired  by a stature of an American Eagle he had prepared for President Ford.

When Gerald ford succeeded Richard Nixon as President, another vacancy  in the vice presidency occurred.  Ford nominated former Governor of New York, Nelson A. Rockefeller for Vice-President.  Mr. Rockefeller took the oath on December 19, 1974.  The two Vice-Presidential medals form what in known as the "Watergate Set."  They chronicle the successive stages of the changes at the helm of the nation upon the resignation of a President.

These two VP medals make up the "Watergate Set" of 70mm inaugural medals which also include the 1973 Nixon/Agnew medal,and the 1975 Ford presidential medal. It should be noted the Republican national committee also struck 38mm vice presidential "luncheon medals" for George H.W. Bush in 1981 and Dan Quayle in 1989.

Great blog of your beautiful medals. I am really becoming a medal fan. So much detail. I remember when president Ford died. In the Palm Springs area, they put up big billboards that read "Gerald Our Ford". He is loved there..Thanks.

Great medals! Sometimes I think these medals are underrated... I love them! Great history and Metallic art! Thanks!

I love these medals, especially the Nelson Rockefeller with it's rough stony form. Medallic Art Company was truly a house full of brilliant engravers. Thanks for sharing.

Excellent Medal and blog. I didn't know they made one one of Gerald Ford. He was a great man . The history behind it you could write for hours. The Medal itself . What more can you say but beautiful. Metallic art perfect because Medals are art. Just look at the reverse. A beautiful design. Rockefeller has such a beautiful eagle. Dynamic. Thanks I enjoyed it very much.

Artistically, these medals are very attractive. Historically, they represent an important aspect of our nation's history, that of the presidency. Your blog is very informative.

I have been paying more attention to medals at coin shows lately. A lot of them are very reasonable in price. Might purchase one someday. Thanks for the information. Very interesting.

A person usually can find these reasonably priced, if they take their time.