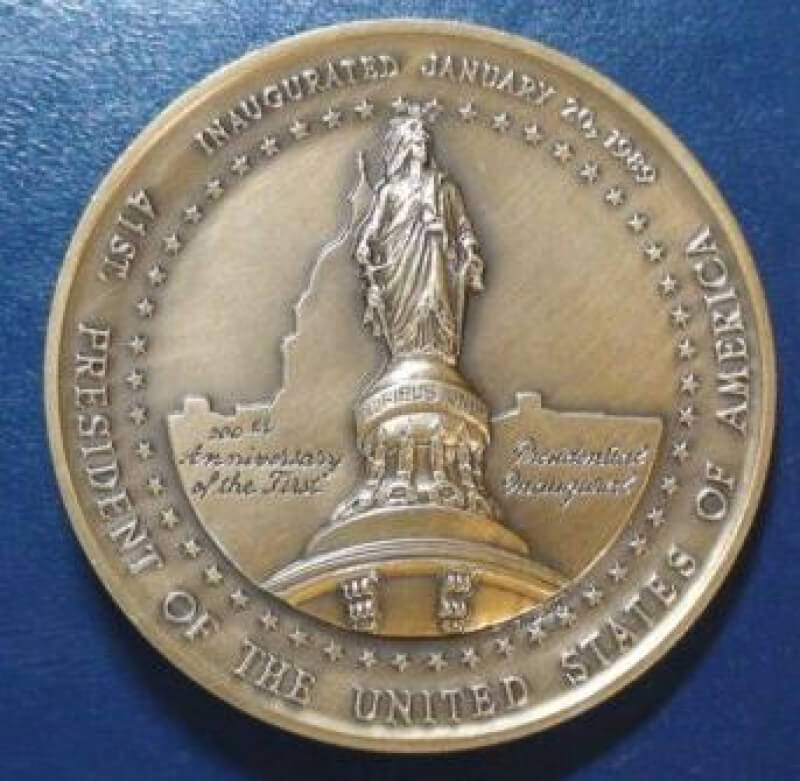 The George Bush medal marks the American Bicentennial of the inauguration of the President of the United States.  Mico Kaufman was again chosen to create the official medal.  For this sensitive  portrait of President Bush, Kaufman sought to portray Bush as a man of purpose and high idea with vision and yet concern for the awesome tasks ahead.  The reverse design features an an unusual perspective of the U.S. Capital building dome with the "Freedom" sculpture prominently featured.  Once again the Medallic Art Company was  chosen to produce the medals.  There were 6.884  70mm bronze medals struck.

History of the Official Inaugural Medal by H. Joseph Levine

The larger medals have so much room for detail and artistic design. These are a good tribute.

That's one I'll be looking for. Thanks!

Nice medal. It's one I haven't' found yet. The presidential medals tend to be designed well in my opinion.

Do you own one or not?

Yes, I have these medals in my collection.

I especially like the reverse of this medal, it has a certain nobility to it.

Beautiful medal. I think the artist captured what he was trying for. Thanks.

Thanks for posting about medals. My new found interest is medals, and can't wait for shows to start up so I can look at some medals in person. Presidential medals seem like a great niche in the medal collecting area.

Great medals. At least yours has all the spellining rite. Medillic Medal company has made.many cotrabutions to the leaders and the great things we have done. One of our great Presidents. Thanks for sharing these.

The Medallic Art Co. has always done a fine job of designing and producing some of the most beautiful medals there are. This one is no exception as it is a wonderful representation of President Bush "41".