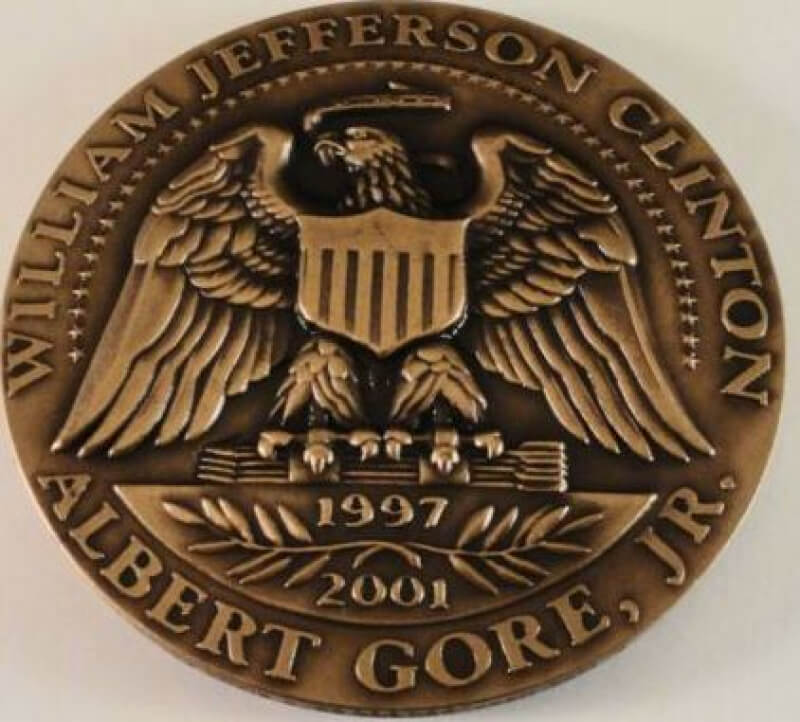 It has been since April, I blogged about official inaugural medals.  I started  with President Eisenhower and planned to go through President Obama by election time.  President Trump did  not have one issued. I do have  the medals, the photos are copied from the internet.

The obverse of the medal has Bill Clinton facing left, while the reverse depicts  "America the Beautiful" with a small Presidential Seal.

Keeping  with tradition, the second medal includes the Vice-President, Al Gore.  Gore is in profile, while Clinton is 3/4 view facing right.  The reverse has a spread eagle to commemorate the passing our great Nation into the next century.

The medal is really nice, I had never really considered the Presidential Inaugural Medals as collectable, and I see that I should have. Thanks.

Very cool, I have not seen those medals before, I wonder why President Trump chose not to have an inaugural medal, seems like it would have been popular. I see that PCGS is slabbing ASEs with Trump or Biden on the label. A bit too much in my opinion.

Hadn't seen these. Thanks for sharing about them.

Nice presidential medals. Low mintage of both medals. Collecting Presidential medals would be a great area of collecting. I suppose there are quite a few people that collect in this area. Thanks for posting the medals. Enjoyed seeing these.

Next one's 100! I like the 1993 medal better, the reverse is beautiful. Thanks for sharing!

Those are great medals that company makes some of the best Medallic. I like the obverse but the reverse is very well done. Its very nice collection you have. Thanks for sharing them .