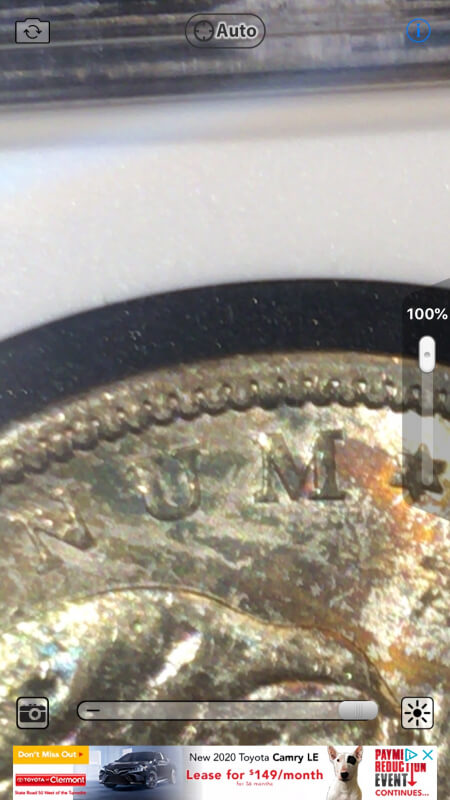 Whenever something goes against the grain usually there can be found an interesting glimmer of hope/ light.  My previous post was concerning the 4 voucher submission return I received and how the grades went against me due to the 4 toned coins all receiving Detail 91 - Questionable Color.  Not what one wants, but there are several opportunities underlying this story and the one I choose will sure have a Part 2 posting.  I am looking forward to it. This is not the "Can't Wait" I am referring to in the title, however.  See equal with this submission was another one I sent in simultaneously.  At an auction online I found a unique Morgan Dollar, an 1921 P.  I know you aren't standing over the proverbial air grate with the gust of air blowing straight up, but it was a 17 Berry reverse. So the coin had abnormally wide edges to the point I ruled out a missed collard error or broadstruck error because all the details were exactly where they needed to be on the obverse and reverse but an "intentionally" made extra thickness from the back of the denticles to the edge of the coin, as even as could be around the circumference of both obverse and reverse. VamWorld time!  I found there was something to the reverse of the coin first and foremost, a 16 Berry or 17 Berry reverse. You can easily tell without counting and that is the Eagles talon on the right side; if the talon extends down to the shaft/tail feather of the arrow then an extra unit of the shaft/tail feather behind it (usually has 4 parts - just look at 16 Berry reverse and you will count 4 parts) will have 5 parts. (Essentially a doubling of the hub caused the extra unit and extended Talon).  Then if you see this look at the top of the left side of the wreath and you will see a very large berry and on the opposite a little one. (don't count these berries first because some die states and wear could have caused that little berry to be lesser in appearance than should be). There are many VAMs for the 17 Berry reverse and of which a particular Holy Grail variety, The Zerbe Proof.  (Not an actual Proof but a severely extra polished business strike).  Now the coin I had also contained an error, yes graded, was designated an Error - strike thru reverse - but not graded a VAM nor a Zerbe.  The error, and I will quickly explain because I don't have the pictures yet, has metal removed around the D and O of Dollar and goes right up to the edge of the bottom of the wreath and ribbon. I think more of a lamination issue due to the D and O still struck, still there but the material removed doesn't extend to any of the devices but just to the edge... little too close for strike thru but lamination error could very well be.  Anyway, I placed a bid and figured one of 2 things would be TRUE if I win: 1) I either win an Error Zerbe Proof ( Very low probability ) or an error VAM ( high probability).  Both are a win in my book. Why I thought it was a Zerbe?  Well it appeared to have on the Obverse the  die polish line from the second U, first serif, in UNUM to the denticle above.  With the toning of green and blue (I like toned coins, yes) in that area it made it very difficult to tell definitively from the auction house photo.   It has many more die polishing marks all over but the Zerbe has that one trait along with the 17 Berry reverse.  I won the coin, received it and was floored by the strike, luster, eye appeal and overall visual aesthetics of the coin.  In an NGC holder I contacted PCGS wanting to send it in for a crossover but I needed to know the service level to choose.  I was advised how to submit it and what to select for service level and I did.  Shortly after I was contacted to be advised it was not a Zerbe, "rats", but it was a VAM just not one PCGS recognizes yet. So I was right after all. Whew Who! Now is the interesting part... So this pandemic juuust so happened around the time my Coin was going through Quality Check and Imaging. And PCGS shut down, temporarily, the doors to their facility and my Coin is still there.  So why is this a "Can't Wait" and not a Woe part 2?  Well I figured I am going to submit it to ANACS for attribution, then re-submit it to PCGS for the VAM attribution plus Error designation. This is why I can't wait, I am stoked about this and am patiently waiting for enough flattening of the curve of the virus in Cali so PCGS can re-open and finalize the processing of my submission.  Not their fault they have to shut the doors temporarily and so I wait... irrational exuberance (to quote Mr. Greenspan) to complete the full error+VAM attribution on my label.  Who knows...maybe I won't be finished there with all the "submissions" I could continue on? (hands rubbing over each other with "up to something facial expression" and Evil Scientist Laughing while purposefully leaving my reader in suspense).

Eyes to old like me to see these vams. Enjoyed your story its long but i want to get it all so i will read it again. Thanks the pictures they help!.

Hurray! Another VAM Guy. We are an odd group, no question. I would recommend that whatever TPG you send your Zerbe, I know you will win it, that they will list it as such as well as the VAM number. They don't list them all. I think ANACS does the most but they all are catching up. Great description in your blog. Well done and thanks.

Awesome post and story. Was hoping you had a Zerbe, and you had me in suspense. Ive mentioned before that I would rather purchase a VAM, then search for them. Ive seen collectors at shows going through upgraded Morgan's assuming they are looking for errors or varieties. PCGS shutting down would be frustrating for sure. Looking forward to more news. Thanks for posting!