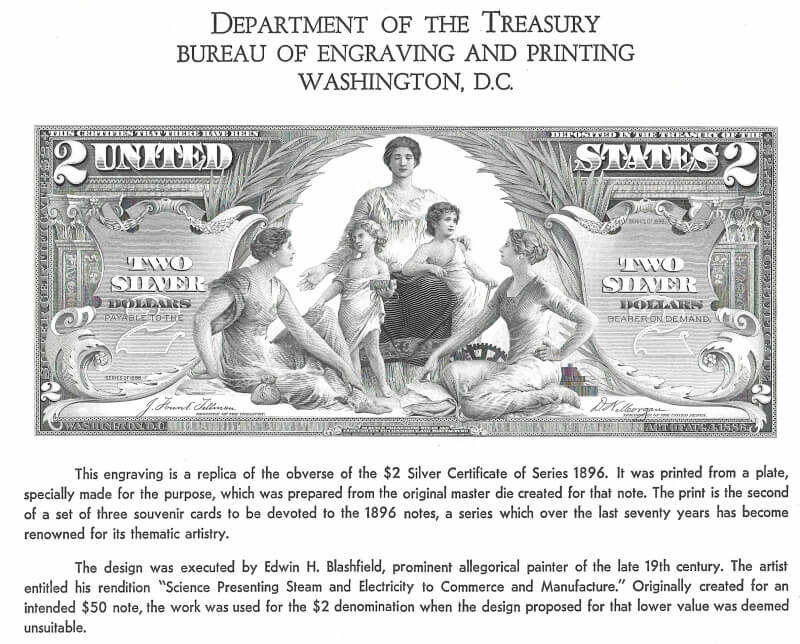 NOTE: Coinsbygary sent me a copy of the ANA/BEP Card for the proposed, but never issued, $10 Educational Note.  I have added it to my pictures.

There has been some talk in recent years about redesigning U.S. currency to distance ourselves from the ancient old men theme.  Of course, Harriet Tubman seems to be back on track to make an appearance on the $20. But displacing old Andy Jackson seems to have stirred up a hornet's nest of opposition.  What I would like to see is a complete and total redesign of all our circulating currency.  Wildlife Themes, Natural Beauty themes, Historical Events, you name it, they could all be part of our wallet if we dare.

Much like coins, our currency also used to have artistry that captivated the imagination and spoke of the power and the grandeur, of our nation.  In my opinion, the most beautiful currency ever produced in this country was the Educational Series of 1896.  This series placed allegorical images on our currency in ways that completely amaze me with the sheer artistry.

The $1 bill, History Instructing Youth, was designed by Will Hickock Low and engraved by Charles Schlecht.  We see History holding Youth close while gesturing to an open book, Washington D.C. looming in the background.

The $5 bill, Electricity as the Dominant Force in the World, was designed by Shirlaw, Morris, and Smillie. The engraving was done by Smillie and Morris. We see Electricity as w winged lady standing over North America while electricity courses through her upstretched hand.  Other figures including a herald trumpeter proclaim Electricity's dominance.

These three engravings were released during ANA Conventions over a three-year period.  They do not depict the other sides of the bills but, of course, they are not collected for their reverses, they are collected for their beautiful obverses.     What do you think?  Wouldn't you love to see currency like this again?  Other countries do it, we can too.

That is a cool cert

I could not agree more! Yet somehow I don't see it happening any time soon and that's sad.

I would have called "History instructing youth" Tarzan and Jane.... LOL!

Oh man I would love to have any of those. This is also my favorite series. My favorite is the $5. All of these are great pieces of art. I agree with your ideas. New art currency is way overdue. Great blog. Thanks.

Wonderful examples! You must be one proud owner!

BEP cards are great if you can't own the real thing.

Beautiful examples and wonderful blog. Being mainly a coin guy, I have less than 15 examples of currency, a change might fuel my interest, however it may not. Later!

I would love to see these classical type designs come back to our currency. They are definitely works of art! Thanks for a great blog! ; )

I agree 100%. And while we're at it, why not issue a commemorative note every once in a while? I know that making any major change(s) regarding paper money will be met with strong opposition from the BEP and Treasury, and they are working full time to keep counterfeiting at bay. But beautiful notes will be worth it. And it may spark an interest in currency collecting as well, just as the Statehood quarters did. I consider myself a numismatist, but am a coin collector first, but give me something beautiful to collect with U.S. currency and I will.

I have all these prints and a $10 "Agriculture and Forestry " note print from the 1974 ANA convention. Based upon a design submitted by Walter Shirlaw and executed by Charles Schlecht was never printed because the bill providing for the $1, $2, and $5 notes did not include a $10 note. I'll e-mail you a picture of the $10 print.

Thanks Gary, the $10 note is absolutely stunning.

It's something worth considering seriously. I would also like to see some classical themes in our new coinage

Currency change would be fine. Currency is less needed anyway. Maybe a new modern design for everything. I like the old currency and look at it now at shows.

I also agree 100 % ! Those are beautiful bills and represent American ideals. I'm all in on your vision Mokester! Who do we see to get this project started? Just sayin'. Thanks for sharing Moke !

I love the educational series. There a little bit out of my budget but to me worth every cent. I agree on the currancy. Harriet Tubman will wind up on the twenty dollar bill.That is way over due. About time. I can see changes in our currancy. But I like the fifty and the hundred. Tubman on the Twenty is great. And the one ,five,and ten dollar I agree totally on. Maybe with our upcoming anniversary would be a good time to change it.. Thanks my friend. Maybe I will just get into those deep pockets and get an educational bill. I think there beautiful. Thanks my friend