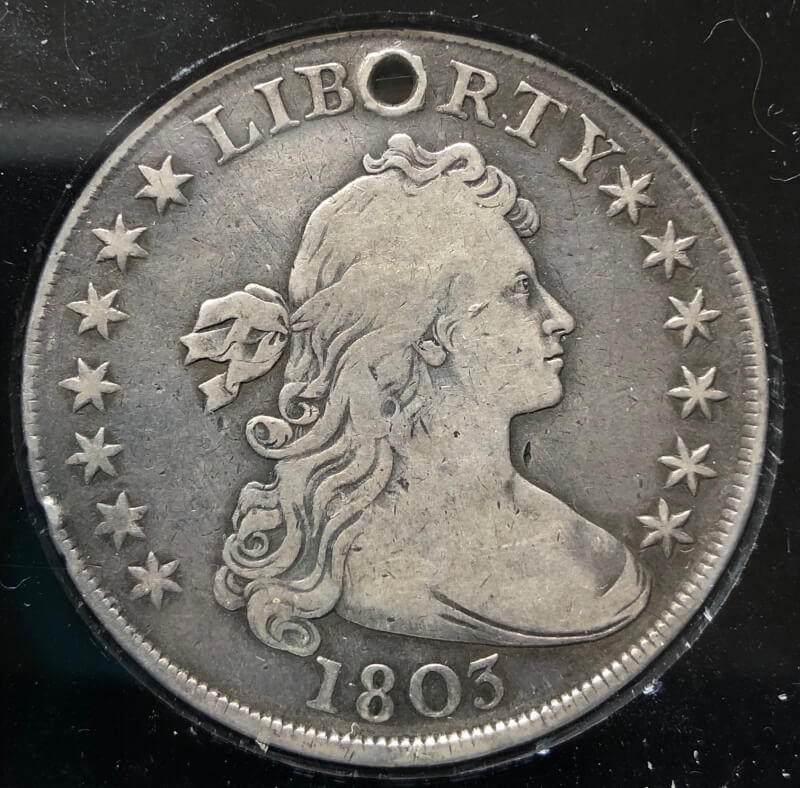 When one thinks about Silver Dollars, your mind inevitably focuses on the rarest Dollar of them all, the legendary 1804 Silver Dollar.  Two things immediately stand out about the 1804 Dollar.  The first thing is the mintage, according to mint records over 19,000 1804 Dollars were struck.  The second thing is reality with only 15 known pieces in existence.

So, what happened to all those thousand of 1804 Dollars?  One theory had the entire mintage shipped aboard a U.S. Navy vessel tasked with suppressing Pirates along the Barbary Coast.  The coins were meant to be payroll for the crew, or ransom for an imprisoned individual.   According to the narrative, the Sailors either spent their Dollars during shore leave or the Ship's Purser paid the required ransom, and they were all subsequently melted.  A darker scenario has the ship sinking along the way and surrendering all the Dollars to King Neptune's Treasury, never to see the light of day again.

Another theory posited that the entire mintage was shipped to Central America where they circulated for a few decades then slowly disappeared into the melting pot or into secret caches yet to be found.  When you think about the fact that Ecuador, in South America, loves our Dollar coins and circulates them freely, the second theory perhaps takes on more substance.

But the real truth is enmeshed in early Mint practices that played loosey goosey with the rules.  First of all, it has been fairly well established that the 19,000 plus Dollars struck in 1804 were all dated 1803.  This was a fairly common practice at the early mint where it was believed that wasting a good die (a die that took great skill and effort to produce) should not be wasted even if the calendar had turned another year.  The Dollars dated 1804 were minted in two waves, the first 8 were produced the mid 1830's and the other seven were produced in the late 1850's and into the 1860's.  The motivation for the two groupings are quite different.  The first 8 1804 Dollars were minted to be part of presentation sets to be gifted during diplomatic missions.  The final 7 were produced in a much more slipshod manner, one actually having been struck over a Swiss Shooting Thaler, for prominent collectors who wished to add an 1804 Dollar to their cabinet.  This was also a common practice at the Mint in the 19th Century and gifted the numismatic community with numerous weird and wonderful patterns and varieties.

If you think about the 1804 Dollar at all, think about the wonderful research primarily by Mr. Eric P. Newman and Mr. Kenneth E. Bressett, that illuminated all the details about her mintage.  Their book, The Fantastic 1804 Dollar, is a MUST read for anyone that loves a great detective story and loves an equally great history.  Thanks for your time, National Coin Week's theme "Money Big and Bold" certainly describes the 1804 Dollar to a tee.

In the early years, until shortly after direct of exchange of bullion for coin at the Philadelphia mint ceased, there were many "midnight" coining operations to satisfy dealers/collectors. So long as the books balance and things hadn't gotten out of control, management seems to have turned a blind eye. I would agree with the Central and South America theory knowing that even today the U.S. dollar coin is extremely popular south of our border. And the Treasury sends millions.

The story of the 1804 dollar is one of the more fascinating stories in all of numismatics.

Very interesting and intriguing. Would like to read the book.

That book has been on my list for some time. Think it's time to go shopping. For a first edition hard cover, of course.

What is odd about the 1804 dollar was that in 1804. they never struck any silver dollars. I will have to add that book to my collection. This coin is one for the rich, or with a big credit card. Being a YN, I can't buy anything without paying several months of chore wages Fodder

Once again you've proven to be an invaluable resource to this community Mokie! A great blog and outstanding pictures to accompany it! Thanks for sharing buddy!

Very interesting... I might be able to hold an 1804 dollar in the coming months... man, would THAT be a great photo! Thanks for another great blog!

You nailed it! Great coin, great blog and photos! Thanks Mokie! ; )

Now this is a blog. It figures you would enter this in the contest. I know you want a couple of those prizes. This is some real competition for everyone else. Way to throw out the gauntlet on the first submission Mokie. I'm not even going to count the words. Well done. A great read. Thanks.

That was wonderful reading. I thought I was in class back in college reading history. History of our country. The mintage and the places these wonderful coins might of wound up is depressing.. It figures that our coinage going to our men only to end up in the hands of pirates is dishearting. Or being melted more depressing or just spent somewhere where they should not of been. That would be the coin to own. .Fifteen left known in existence is heart breaking. Thank you for a wonderful blog. I always say it . We learn our history from our coins. Thanks again.