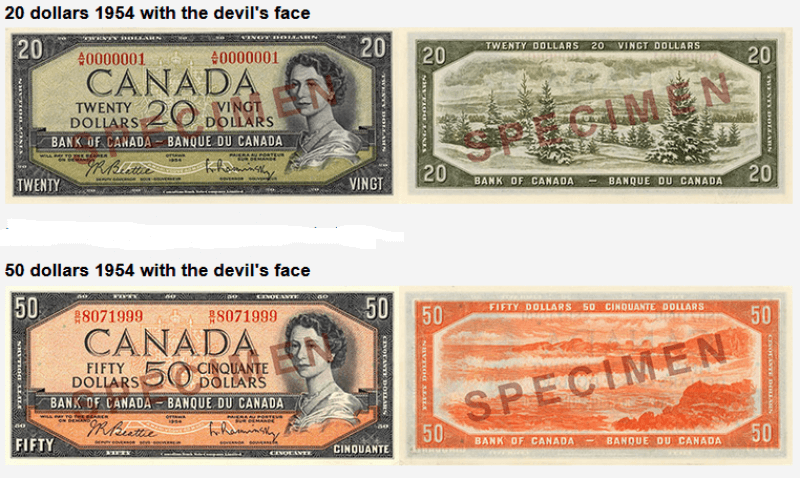 Queen Elizabeth II was in her second year of reign when Canada issued their first series of bank notes with her image on the right obverse.  Unlike the United States, the Canadian Bills have the same portrait on each denomination. This first series of 1954 had $1, $2, $5, $10, $20, $50, $100, and $1,000 dollar denominations and besides their Queen Elizabeth portraits, they also all shared a devilish detail.

In Queen Elizabeth's hair a very clear image of a horned devil appears in the Her Majesty's tresses.  Unlike some images that are hard to see, this one is very clear to the unaided eye.  In fact the image is so strikingly obvious that the Canadian public started believing the image was engraved there by an Irish Republican Army sympathizer or a French Canadian separatist.

Despite exhaustive investigation, there has never been proof that the image was anything more than mere happenstance.  There was a brief revival of the issue when the original engraver died and his personal ties to an individual that might have been Satanic cultist was uncovered.  But nothing came of this.  The Notes were replaced in 1956 and all the Devil's Heads notes that returned to banks were taken out of circulation.  Because of their relatively short period of circulation and their publicity, many high grade examples exist.

My example is a $1 bill in XF40 condition.  It came to me courtesy of a Friend on this very board.

Yikes. Another interesting story for Numismatists. That is a weird one.

Cool blog, I got an old Canadian Dollar with that portrait of QEII. I guess now I'll have to haul it out and have another look.

Cool blog! The mind is an amazing thing and so is our imaginations! I couldn't see it for awhile, but then when I did, it just popped out! haha

During WW II the Germans had been able to counterfeit the British five pound note. . It was perfect. Countries do this to bring there economy to a halt. Then England looses the war. The commandos radid the operation and dumped those millions in a near by lake. The were found after the war. Still in perfect conditions. Being Irish nothing would surprised me about these devils. The South had won its freedom but they wanted the six counties in the north. It was after the revolution that these notes were found with this devil. The I.RA. Would stop at nothing to bring down the country of England. My opinion. Great blog keeps you thinking. Thanks I enjoyed that.

If in fact the Devil's face was purposely planted, I think it more an act of mischief than a any attempt to subvert the currency. I tend to believe it was just an accidental rendering like seeing an Elephant in the Clouds. But it is pretty easily seen for most people.

Took me a while to see the devil ! My opinion is that it was not intentionally added. Interesting story.

It is amazing what a person can find in a design.

Creepy! When I first saw one of these I couldn't see the devil face on it. After looking it up, I can't get it out of my mind. It jumps out now. Very nice blog and super clear photos. Thanks for the history of this issue. Enjoyed reading this blog. Thanks..