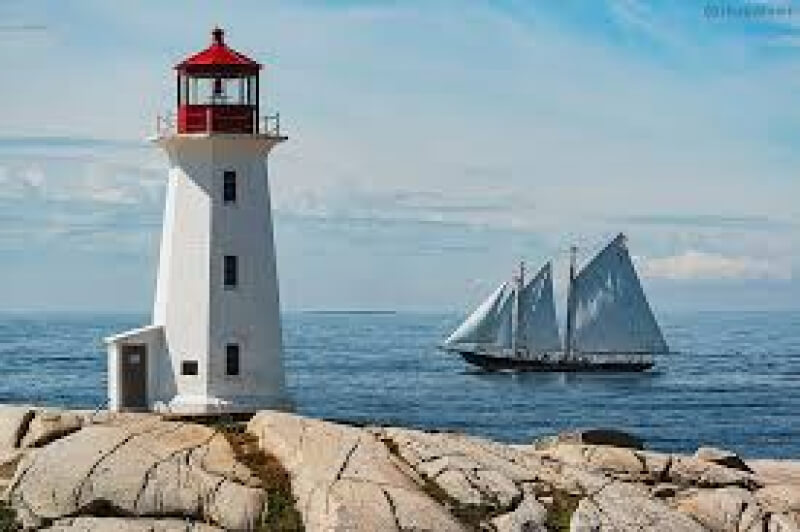 When we think of Canada, we think of Beavers, the McKenzie Brothers, Moose, Maple Leaves, and maybe Poutine.Ā But you probably do not think of Bluenose.Ā Bluenose is a fishing/racing schooner built in Lunenburg Nova Scotia and launched in 1921.Ā She has been featured continuously on the reverse of the Canadian dime since 1937 (except for 1967).Ā

So, what is BluenoseŌĆÖs story?ĀĀ She is a fishing vessel, meant to ply the fertile waters of the Grand Banks.Ā She was also a racing schooner that wreaked havoc on her competition in the 1920ŌĆÖs, sadly by the 1930ŌĆÖs her style of boat was no longer commercially viable but her racing prowess was undiminished and she won her final challenge against the U.S. schooner Gertrude L, off the coast of Massachusetts, in 1937.Ā Sadly, she was sold to a West Indies company in the 1940ŌĆÖs and sank after hitting a reef in 1946.Ā

Bluenose II, a reproduction of the original schooner was built in 1963, she is homeported in Lunenburg, N.S., and plies the Atlantic Coast as a wonderful symbol of Nova Scotian pride.Ā The Royal Canadian Mint thought it fitting and proper to honor her on her 100th birthday with a beautiful commemorative.Ā The reverse shows marine architect William Roue designing Bluenose while the finished ship appears through his imagination.Ā The obverse features the famous portrait of George V, symbolic Head of State when Bluenose was launched.Ā

Out of curiosity, was the portrait of George V on the proof from the original model used on the Large Cents of 1911-20 or a modified version?

Good question, I took a look at my 1935 Dollar and compared it to this Dollar. The Proof vice Uncirculated makes it a difficult comparison, but I believe the current George V differs from the original Dollar George V. Probably a redo like when Morgan had to recreate his design in 1921. In this case, although the original designer is credited by the Mint, I think it is a redo.

Nice coins to go along with a great story buddy! I really enjoyed learning about bluenose! Quite the vessel, eh? Talk to ya soon Mokester!

What an absolutely beautiful coin. And, what a track record in races. Thank you, Mr. B

Single malt Scotch, wow, my mind flashed back a bit as well. I never knew this story, great blog. Later!

Great blog. I learned a bunch from you today. Beautiful coin and boat. I wonder if she brought any fine Canadian whiskey here during prohibition. Sorry my mind wondered for a second. Thanks for the history.

Beautiful coins! I really enjoyed the history behind them! Thanks for your research and for sharing these. ; )

A beautiful shio. I can see it sailing in the blue water. Three sales almost like his being above the waves. I saw this or something like this in a Museum. It was a model but looked so real. It was a mighty ship yet graceful. Her She was sad but down to the depths all great ships go. Thank you for the memories. I didn't know they made a coin a beautiful coin. Thank you my friend.

Thanks for sharing. I never knew the story behind the image.

Nice story. It is great to tie the story to a coin.

From time-to-time, I remember getting Canadian Dimes like the one you picture in my change. At the time, I never gave them a second thought, nor of the schooner portrayed on the reverse. Thanks for sharing this story Mokie. I guess that ignorance is not always, if ever, bliss!

I want one of those. Always liked Canadian coins. I may try for one of those. My brother is a naval architect, he would like it. Nice post. Thanks.

Thanks for the awesome blog! I never did know what that was on the reverse of Canadian dimes before.

Wonderful coins, I enjoy them a lot! Thanks for featuring this one for us today!

Very fascinating! I never knew about that, but I have been to Nova Scotia a few time. I have some ancestry there. Cheers!