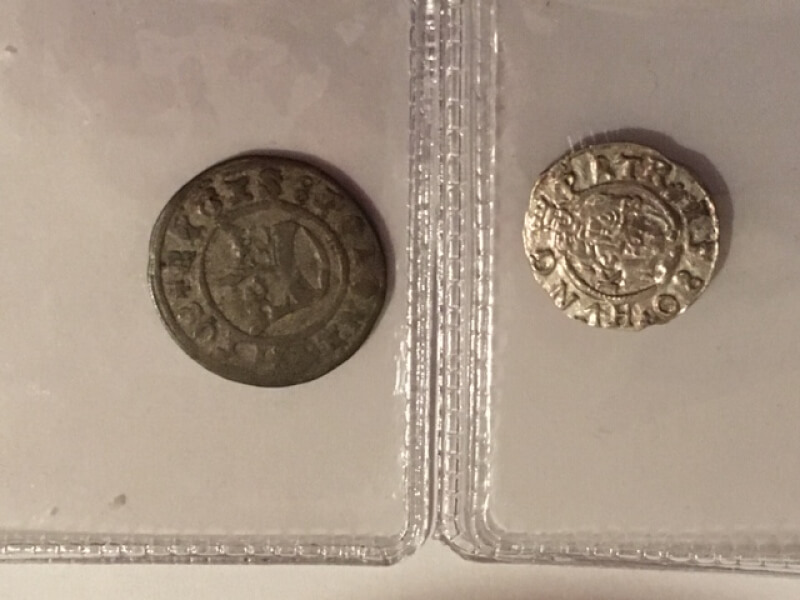 Old European coins from the 1500s

I acquired a pair of very old coins last month.Ý The ‚Äúnewer‚Äù of them is from the Kingdom of Hungary and was minted in 1580.Ý The Kingdom of Hungary was ruled by the Hapsburg dynasty and was on the eastern edge of their domains.Ý Ottoman invasions throughout the century had eroded Hapsburg control of Hungary. The Hungarians had suffered a disastrous defeat at the Battle of Mohacs in 1526, in which their king was killed.Ý Their defeat was so bad that an expression came into being, used in any hardship: Worse was lost at Mohacs.Ý By 1580, the country was a small portion of what it had formerly been.

This coin is a silver denar, with a religious image of Madonna holding child on its reverse.Ý The ruler at the time was Rudolph II, who was also Holy Roman Emperor. As emperor, Rudolph was unpopular for his intolerant rule.Ý Combined with his mental health is cited as a root cause of the Thirty Years War that wrecked Europe in the 1600s.

I don‚Äôt normally buy such old coins, because their quality is normally bad and their features difficult to make out.Ý This coin, however, is fairly sharp at 400 years old, still retaining its design. The obverse has a shield with the Coat of Arms.Ý Like many coins from the period, it is very flat in comparison to more modern coins, with no measurable height. It has no edge, rim or reeding.Ý It was minted by hammering: inserting a planchet into a restraint, with obverse and reverse dies surrounding it. It was then hammered, often multiple times.Ý As a result, doubling on the design is common; this is true for my Hungarian coin.

The other coin fits many of these descriptions: flat, hammered and well worn.Ý This coin is older than the Hungarian one, dating to 1508. It was issued by the Kingdom of Poland under King Sigismund I, only two years after their first coins.Ý Its denomination is ¬Ω Groschen, but the coin does not show it. The obverse has a Crown in the middle, with edge lettering denoting the country and date. The reverse has an Eagle in the inner circle, with King Sigismund‚Äôs name wrapping around it.

King Sigismund became king of Poland on the death of his brother in 1506.Ý He launched currency reforms, leading to the first Polish coins that year. During his rule, the kingdom was enlarged and the Teutonic Knights were defeated.Ý Old coins such as these are new for me and I was surprised by how much I learned from studying them.

I have been thinking about collecting a few older coins with good history behind them. This sounds like a good lesson to me. Thanks

The way this works so well is we leave comments on your blog and you leave your comments on all the others. That's how we learn. We read each other's comments. So I will leave you now.. It was good for a while. Continue writing you will do great!!Mike.

You get a lot of character with older hand struck coins. They almost demand you to touch them and hold them in your hand.

Thanks for sharing your beautiful coins and your detailed description of each,. I really enjoyed reading about them.

Truly fascinating article. The pieces you have are indeed quite beautiful.

Those are fun coins to collect. I have a number of Thalers from the 1500's in addition to some similar to yours. Not all coins from this era are crude. I'm not saying that in a bad way, I like crude coins.

Awesome coins. I dont have any coins that old. Looking at purchasing a coin from the 1700's, but to have coins that old would be great. To wonder about the people who touched those old coins and their lives. Thanks for the pictures and history.

Thank for the information . I have seen them before.