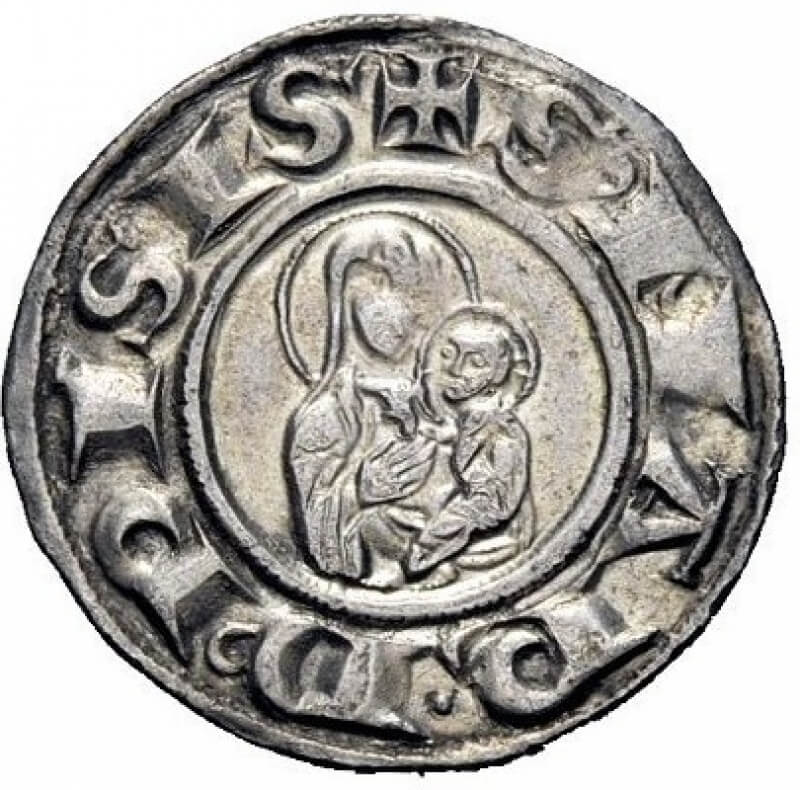 While much of Europe was still shrouded in the Dark Ages, the merchants states of Italy were trading across the Mediterranean, with North Africa, Byzantium and the Levant.  Most famous of these is Venice. But whereas Venice's origins date to well after the fall of Rome, Pisa has been settled since the 9th century B.C. and was an ally of Rome during the Punic Wars.

The city of Pisa, home to the iconic Leaning Tower, was a merchant republic on the Arno River.  With this strategic location, Pisa grew into a dominant merchant state starting in the 12th century, and continuing for the next 150 years.  Pisa conquered Corsica, the Balearic Islands and part of Sardinia, trading with Italy, Sicily, North Africa, Byzantium and the near east. The city grew wealthy through trade, and gained culturally and artistically from contact with the Middle East.  With the development of Pisa's trade, they were able to mint their own currency, beginning in 1155, the same year the defensive wall around the city was built.

Pisa minted three denominations of currency, the grosso, denaro and bianco.  Three denaro (or denari) was worth bianco, and four bianco was worth one grosso.  One grosso was thus worth 12 denaro. This system is reminiscent of the British pound sterling system, with the penny and shilling (12d).

Of the three, my favorite is the 1 grosso (see Image 1 ).  Minted from 1155 to 1312, the coin depicts the Madonna and child on the reverse in the inner circle of the coin.  Around the image is an inscription "S Mar D'Pisis". The obverse also has an inner circle, with an "F" for Frederick 1. The coin weighed 1.7 grams and was made of silver.  This makes it about the size and weight of the c.1910 Canadian 5 cent coin, which was also silver.  It does not bear the date.

What I love about this coin is how it seems like the modern 1 Pound coin.  Both have an image of a revered figure on the inside circle of the coin (Madonna and child; Queen Elizabeth II), and a text inscription on the outside.

The figure of Madonna and Child is a typical art piece of the early Renaissance period, of the late 13th century.  The image on the coin looks very much like that of a 13th century panel painting (see Image 2 below).  Both depict Jesus in the Madonna's arms; the subject of numerous religious paintings from the time period.  As a product of Pisa's trade and economic growth came great scientific discoveries and advancements in mathematics.  The great mathematician, Leanardo Fibonacci (1170-1250), known for the Fibonacci sequence, was born in Pisa and introduced the Hindu-Arabic numeral system to Europe.

It was not to last.  As Pisa expanded its territory across northern Italy and grew wealthy, got on bad terms with rival merchant states.  Pisa suffered defeat at the hands of Genoa at the end of the 13th century, losing Corsica in the process. In 1324, it lost its lands in Sardinia to Aragon.  It suffered its final defeat in 1406, when Florence captured Pisa itself, helped by treachery by the Captain of the People.

But while it lasted, Pisa was a flourishing republic, home to a university, with its own coinage, while helping to pioneer advances in art, math and science.

Image 1: The Pisa 1 Grosso, minted from 1155 to 1312, featured the Madonna and child.  The image is similar to other 13th century religious artworks.

Image 2: The famous Maesta by Giotto di Bondone was painted in the early 14th century.  It was made as an altarpiece of enormous proportions.  It is now on display in the Gallerie delgi Uffuzi in Florence, Italy.

Coins of the Republic of Pisa: https://en.numista.com/catalogue/pisa-1.html

History of the Tower of Pisa: http://www.towerofpisa.org/tower-of-pisa-historical-facts/

I really enjoyed your blog! Tons of information. Thanks for your research!

Great information! It takes a lot of knowledge to write a blog like that!

Very interesting history, I really enjoyed reading about Pisa and her coinage. That Grosso is very attractive.

That is excellent. Well done.I learned from this blog. Great research and photos. Fantastic bibliography. I am looking forward to rest of your series. Thank you.

Enjoyed the blog. I also, picked up a few things.

I enjoyed this very much. I picked up a few things. That's a good.blog. The research and information makes you want to learn more. Thanks for your work keep them coming!!