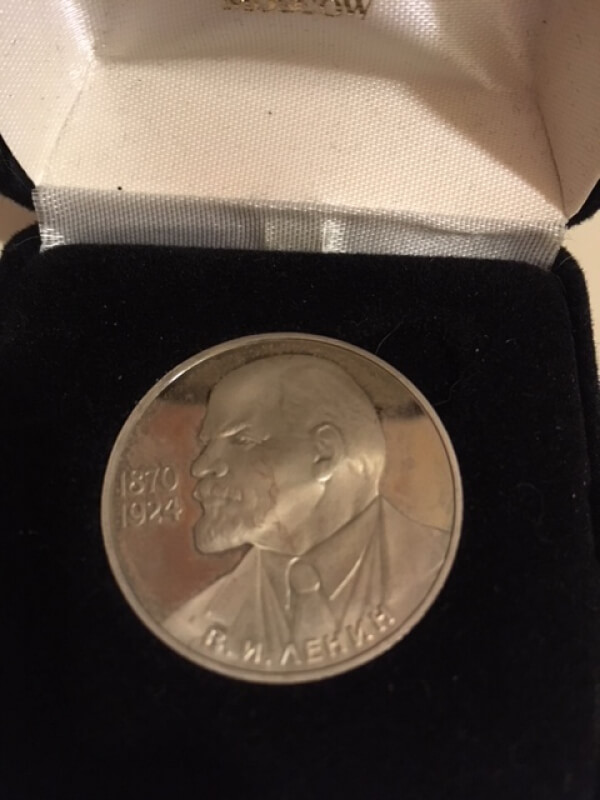 Numismatics and history are very closely connected.Ý From the earliest coinage to modern commemoratives, coins tell the story of triumph, conquest and tragedy throughout history.Ý They tell the story of kings and of revolutions, exploration and innovation. This series looks at the history of the Modern World through the lense of 20 coins.

Part 15: Coins from the USSR

The Soviet Union (USSR) was founded after the Bolshevik Revolution at the end of the First World War.Ý At first it would encompass less territory than the Russian Empire, with the founding of new states in the Baltic and Eastern Europe.Ý But after 1945, it would regain those territories, and effectively rule all of Warsaw Bloc (Poland, Czechoslovakia, East Germany). The entire basis of the country was on authoritarian rule, much like its predecessor, the Empire.Ý The Soviet Union would last until its breakup in 1991.

Near the end of the Soviet Union, in 1985, they struck a 1 Rouble coin to Commemorate the 115th Birthday of one of the great leaders of the USSR, Vladimir Lenin.Ý The obverse of the coin depicts Lenin, looking like an unhappy, but intelligent man. The dates of his birth and death are to the left of his bust. The reverse has the seal of the Soviet Union, flanked by "CC" and "CP," Russian letters for USSR.Ý The date and denomination are at the bottom of the coin. The Soviet Union also minted a 100th Birthday coin for Lenin in 1970, that had a similar design.

Born in 1870, Lenin was the leader of the Bolshevik Revolution in 1917 and established the framework of the new country until his death in 1924.Ý His doctrine of Leninism, along with that of Karl Marx formed the basis of Communism.

After his death in 1924, Joseph Stalin and Leon Trotesky vied for power.Ý In the end, Stalin forced Trotesky out of the country. He lived in exile until he was assassinated in Mexico in 1940.

The Soviet Union and the United States were engaged in the Cold War after 1945.Ý A nuclear arms race put the world on edge, and led to competing alliances, NATO and the Warsaw Pact.Ý The two sides never went to war, but there were scares, including the Cuban Missile Crisis in the early '60s.Ý The US and USSR also competed in the Space Race. The Soviets were the first to launch a satellite and then a person into space, but the Americas retook the lead with the Apollo Missions, landing Apollo 11 on the moon.

In the 1980s, reform minded Mikhail Gorbachev came to power in the Soviet Union.Ý He relaxed some of the oppression within the USSR, coming into conflict with old party hardliners.Ý On November 9, 1989, the Berlin Wall, symbolic of the separation between Capitalist West and Communist East, was toppled.Ý Germany, divided since the end of World War 2, was reunited. The USSR time was limited, and on December 26, 1991, it was dissolved.Ý The countries of Eastern Europe regained their Independence and the countries of the Middle East, including Kazakhstan and other -stans.

But first, we must take a look back at World War 2, which set the stage for the US and USSR over the last half of the 20th century.

Photo by the Author

WWII proved once again that sometimes your enemy has to be worked with to achieve a lesser of two evils in the end. Thought provoking topic.

Very interesting history behind this coin. Thanks for sharing it.

Great blog. I enjoy this link between coinage and history. I just want to mention that during the Cold War, we did kind f go to war with the USSR in that we had our pet nations fight it out for us. Never went well for either of us. I am looking forward to the rest of this series as I like to collect USSR coinage and old Russian currency. Thanks.

Thanks for providing historical background.

The coinage of the USSR has become more "collector friendly" ever since it's 1991 demise, meaning there are no future issues to purchase and determined collectors can eventually assemble a complete numismatic history. Considering the overall coinage, I've always found it interesting that themes went from agriculture (farming) to technology (space travel) in such a short period. (The USA has yet to issue a coin featuring a tractor on it) The USSR also jumped on the WWII commemorative bandwagon long before other countries. Perhaps the most interesting thing about USSR coinage was the ever present images of Lenin... he was there till the end. When you think of it, no other major nation's coinage is contained within a single century like the USSR's.

Excellent post! You have captured the intention of the coin's issuance within the context of history.

A very attractive coin and a nice summary of Soviet political history. I would say that Stalin's ascendance was the great tragedy of the Communist experiment.